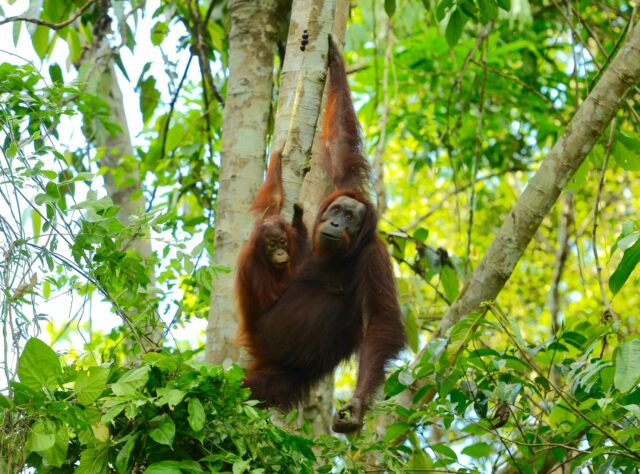 Decades of research and field work by HUTAN have opened a window into how crucial land protection is for female-centred orangutan groups – and this is work which you can support through our new appeal. Credit: Azli Etin/HUTAN

Donations to our new ‘Saving Borneo’s Orangutan Corridors’ appeal will help expand a network of protected land for the orangutans of the Kinabatangan Floodplain, and few know them as well as Dr Felicity Oram. As part of a team of HUTAN researchers based by the longest river of Malaysia’s Sabah State, Felicity has spent over a decade observing the comings and goings of an orangutan community. Today she writes about why to help HUTAN save two new properties this year is to protect the lifelong bond between these great apes and the land they grow up in.

When HUTAN co-founders Isabelle Lackman and Marc Ancrenaz invited me to visit the Kinabatangan project in 2009, I dropped everything to be able to come on board.

I had worked with orangutans before that point but when I arrived to HUTAN’s research station by the river, I was transformed after observing them in the wild. For us HUTAN field researchers it’s a relationship of total respect with these animals. We don’t engage or interfere in any way, and we know that if we’re seeing one at all, it is because they’re allowing themselves to be seen. This is a species that is in charge of their environment and with them, you know something’s looking at you and truly seeing you. It’s quite a profound feeling.

At HUTAN our goal was to find that one individual who would begin to trust us and then lead us to the broader group for us to study, and for us that was the orangutan we know as Jenny. Over the years, through her we’ve come to gain a window into the community of related females she’s part of: Maria, Mawar, Juliana, Meggie and all their offspring. It is females like them, and not the big majestic males, that are the core units of orangutan society. As we’ve discovered through relatively recent genetic studies, these female ‘villages’ are mostly genetically related and spend their lives in the land they grew up in.

This lifelong tie with one’s land makes sense: it allows female clusters to know the landscape around them, and enjoy the support and company of their relatives. It also explains why saving every acre counts, here in the Kinabatangan Floodplain and elsewhere in Borneo. At a time when orangutans no longer have the huge forest they once knew, extending new protections over the habitats still left will benefit the very communities that are the future for orangutan conservation: the orangutans raised by their own mothers and therefore able to adapt to changes in an environment they know well.

These are the stories of some of the orangutans we have observed over the decades at HUTAN: 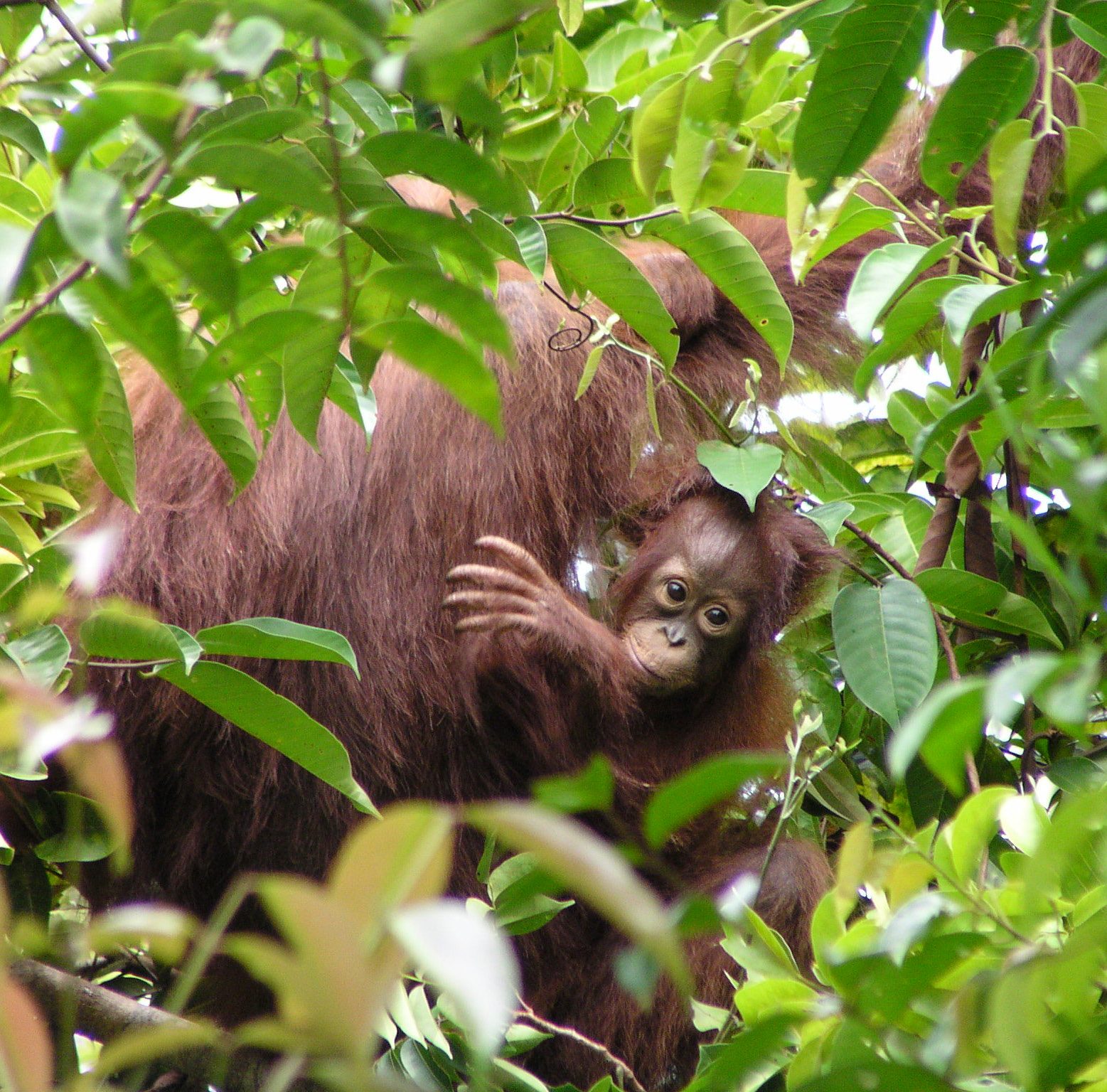 This is a close-up of the three-and-a-half-year-old female orangutan we know as Oceane, hitching a ride on her mother Jenny as she moves through the trees. Oceane is a younger sister of Otai (see below) and Jenny’s youngest daughter. The presumptive father of Oceane is Kusai. Between the ages of three and four is a time of rapid growth for young orangutans in the forest. Though they are not fully weaned until seven years of age, from three years old they progressively become more interested in actually eating solid food rather than just playing with it! By this age, they are also quite skilled at travelling through thick canopy like this shown in the photograph. However, just prior to this photograph, Oceane got a bit too far behind her mother and Jenny needed to retrace her steps to offer reassurance. Though Oceane still has lots to learn, she has plenty of time to get to know every detail of her forest home, as she will stay within the community of her female relatives on their ancestral land for life. 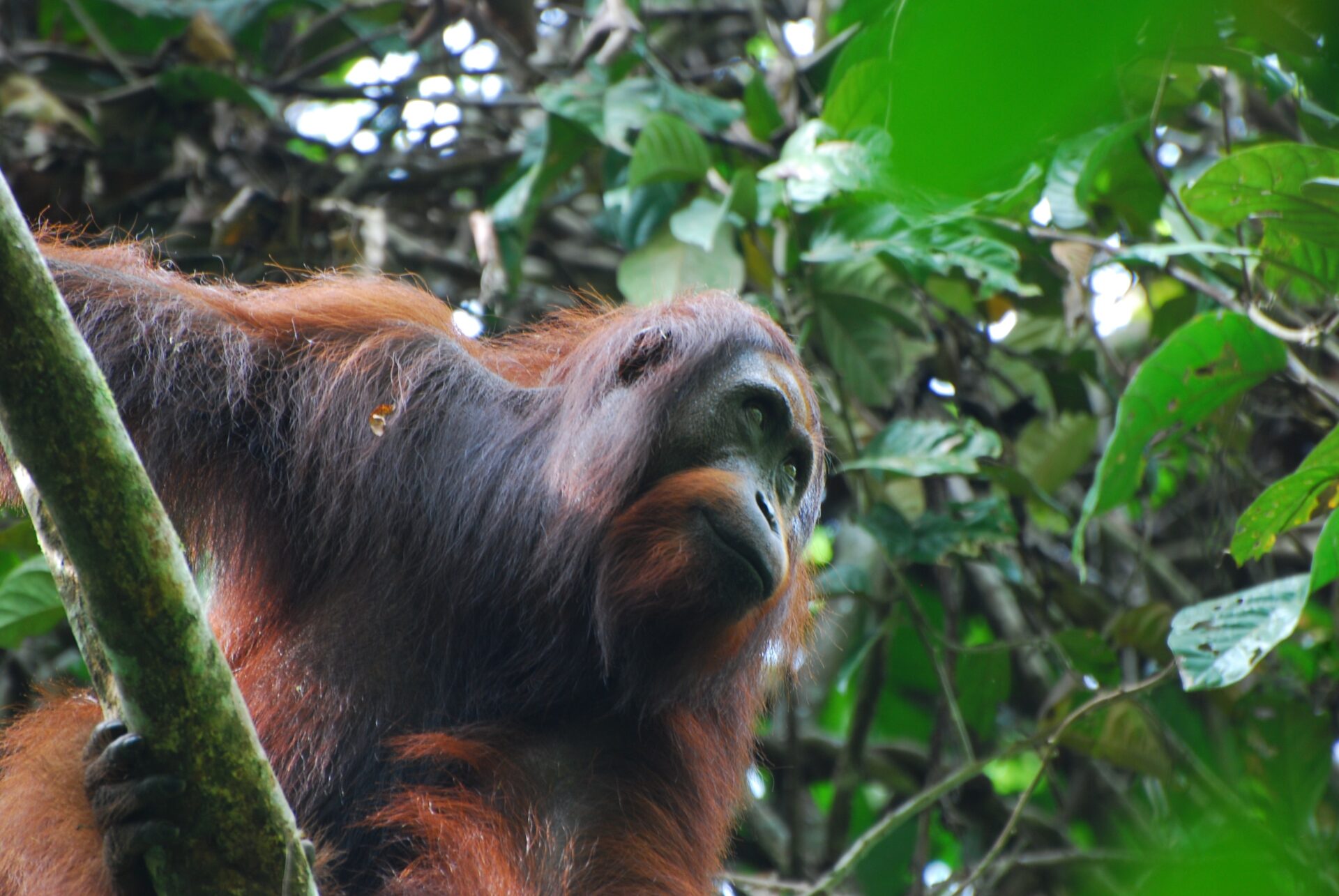 This is a photograph of a “teenage” male we know as Otai. His mother is Jenny, the first wild orangutan who allowed the HUTAN team to observe her daily life in the forest. The research team had the great privilege of watching Otai grow up within his family group in the HUTAN study site. When this study began, Otai was around one year old. In this photo, he is 12. When he was 15, the team watched him leave the forest where he was born. Though we were sad to see him go, we were also happy to see him act exactly as expected of a wild male orangutan when they reach maturity. Forest land purchase helps support young adult males like Otai, as they venture out to the wider orangutan community living in other forested areas of the Kinabatangan region. 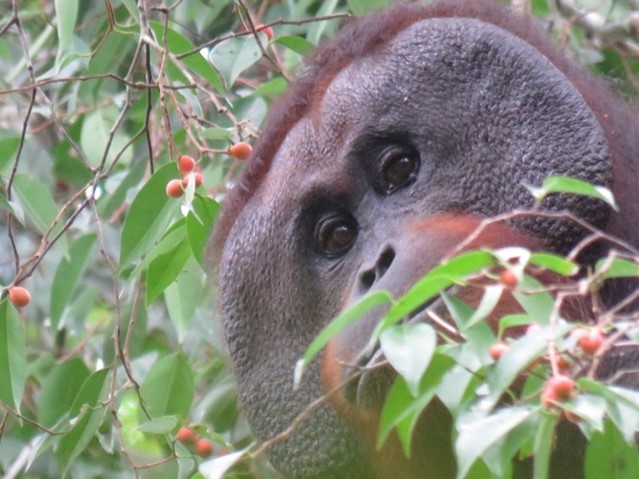 Adult male orangutans range further and wider than female orangutans. They travel between the forests where females and offspring live, following fruiting seasons across the landscape. The orangutan in this photograph has the fibrous cheek pads or “flanges” on either side of his face – a characteristic of the largest form of an adult male. This flanged male is an individual we know as Kusai. The fruits in the photograph are ripe figs. Orangutans usually feed on their own, except in fig trees, where we may see as many as nine individuals in the same tree at the same time. We think this flanged male is the likely father of Oceane, the baby orangutan shown in the first photo above. 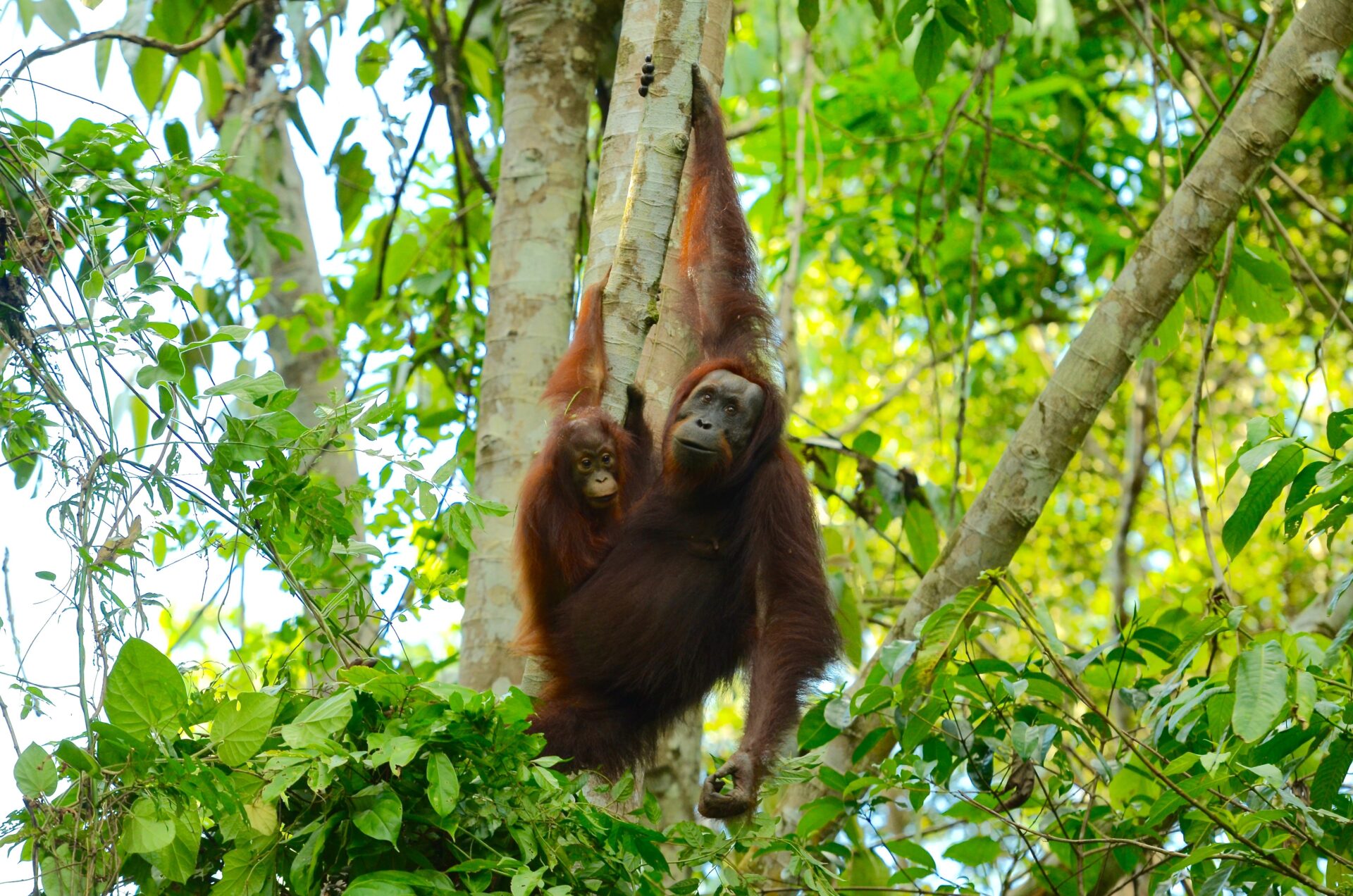 This adult female lives with her six-year-old offspring in a patch of forest that borders an oil palm plantation. The forest where she is living is sufficient to support both this mother and her healthy offspring. This young male will stay very close to his mother, learning from her directly until he is seven to eight years old. Then for seven more years, he will remain nearby, still making use of the resources in his mother’s home range, as he continues to gain more skills necessary for a fully independent life. Then, like Otai and Kusai in the photos above, we hope he will also leave the forest where he was born to live the more migratory life characteristic of an adult male orangutan. Forest land purchase helps retain adequate forest to support resident adult females, especially younger female adults like this one, so they can continue to raise future generations of orangutans in the Kinabatangan. 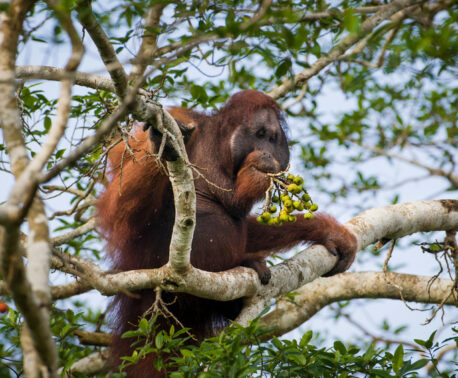 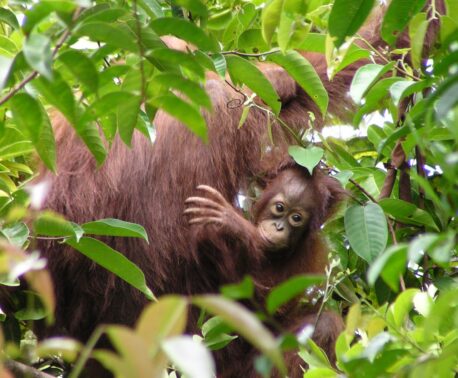 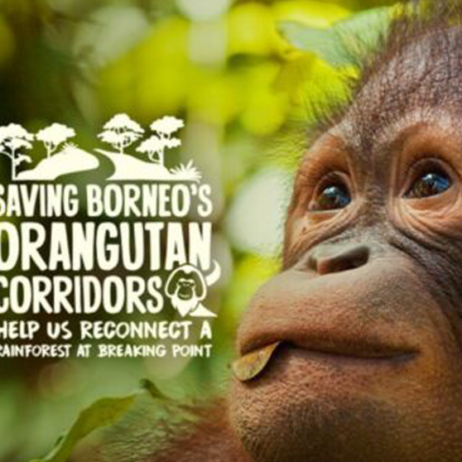