We saved nature together, again!

At WLT we continue to pinch ourselves as we bring you the news: our #BorneosOrangutanCorridors appeal has more than doubled its £150,000 target – over £300,000 raised in just six weeks!

When we launched our appeal on #WorldRainforestDay the plan was to fund our partner HUTAN’s saving of two plots of orangutan habitat. Now, thanks to your generosity, it could be up to five.
A new lease of life for Borneo’s spectacular biodiversity

Every six seconds, the world loses an area of rainforest the size of a football pitch. By supporting our new £150,000 appeal, you can bring much-needed protection to our project area on the banks of the Kinabatangan River, safeguarding wildlife in one of the world’s key biodiversity hotspots.

At Pangi, the two properties WLT partner HUTAN can now purchase will link an existing reserve to the river, providing a safe passage for swimming elephants to migrate north. The new reserves will also secure habitat for the Kinabatangan’s eight species of Asian hornbill, all of which are threatened by the illegal wildlife trade – as is the Malayan Sun Bear, the world’s smallest bear species.

Alongside the Critically Endangered Bornean Orangutan, primates like the striking Maroon Langur, tiny Philippine Slow Loris and one-of-a-kind Proboscis Monkey call the trees here their home – all species you can save, with WLT and HUTAN, today.

A crucial link in the chain: What your donations will achieve

Your donations will fund HUTAN’s purchase of two new reserves of incredible strategic value, ensuring the impact of these costly properties far exceeds their 10 acres. For the elephants forced into private land after decades of deforestation, the purchases will secure a safe passageway to the river, helping prevent conflict with humans and the resulting elephant death toll that rises every year.

Our partner’s project will also shield a much larger (and as yet unprotected) expanse of rainforest further west along the river bend. With a buffer of well-patrolled reserves either side, the likelihood that this land will be developed for crops falls dramatically. Maintaining tree cover here will also protect against erosion – a boon for the local orang sungai (‘river people’), who rely heavily on the freshwater prawns that breed along the riverbanks. 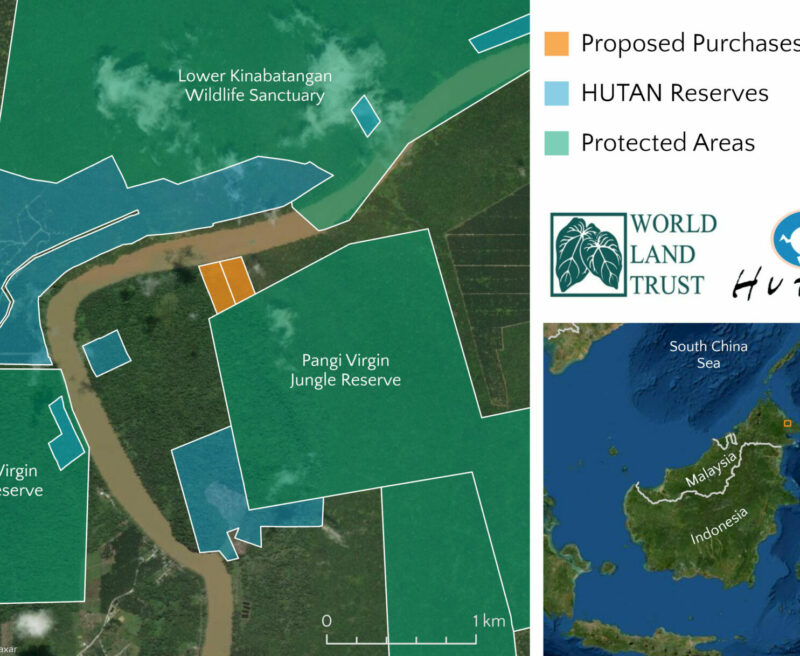 MEET THE ORANGUTANS
OF THE KINABATANGAN

In the Kinabatangan, home to the rainforests you can help protect through our new appeal, WLT partner HUTAN have been studying orangutans for a quarter of a century. Over the years they’ve come to know many individuals, all of whom have taught HUTAN’s researchers valuable lessons about orangutan behaviour.

Here are a few of the names who are now relying on your generosity: 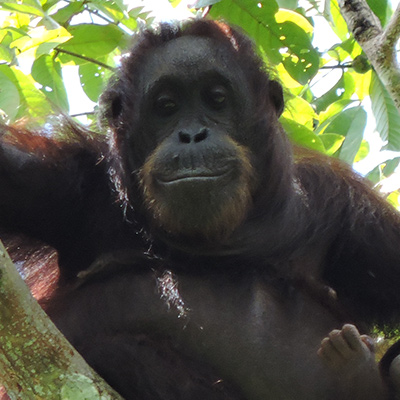 A venerable matriarch and mother of six, Jenny was the first wild orangutan who allowed the HUTAN team to observe her daily activities. In contrast to far-ranging males, female orangutans remain in their ancestral forests for life, living close to their female relatives and anchoring their communities. Together we can keep areas like Pangi intact, where orangutan families can continue to live in safety. 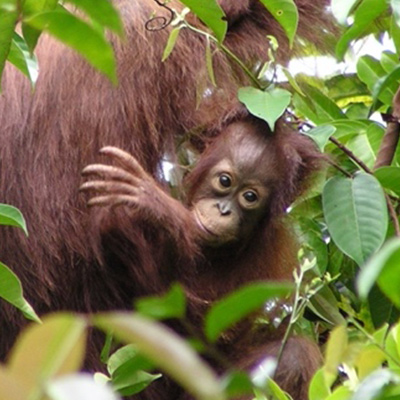 In this picture, three-year-old Oceane – Jenny’s third and youngest daughter – clings tightly to her mother for protection. For the first seven years of their lives, young orangutans rarely leave their mother’s side. This formative period is crucial, as a life in the trees requires plenty of training. If the next generation of orangutans are to learn the ways of the forest, we must preserve the habitat they have left. 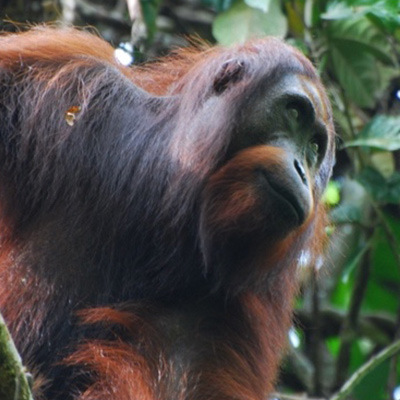 Despite leaving Jenny’s nest upon reaching adolescence, Oceane’s older brother Otai remained close to their mother for a further seven years. When males finally come of age, they will leave to spend the rest of their lives on the move. If these nomads are to survive, it is essential for us to provide connectivity between forest fragments – safe corridors that orangutans can use undisturbed. 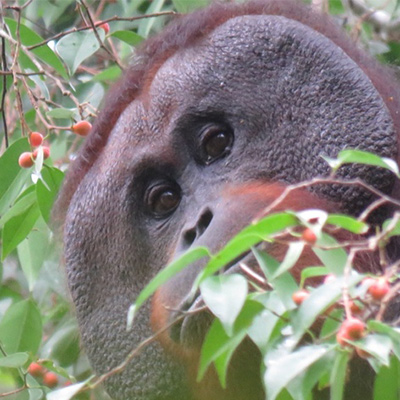 Oceane’s presumptive father, Kusai, sports the distinctive flanges (cheek pads) that mark out the largest mature male orangutans. Encounters between flanged males are usually aggressive in nature, but with territories shrinking, HUTAN have observed a recent shift towards coexistence. Orangutans have shown a remarkable ability to adapt to Borneo’s fragmented forest landscape, but we must act now before these great apes are pushed too far – before they are forced into a world they cannot adapt to.

The species you can make a difference for

Some of the oldest and most biodiverse forests on Earth are found in Malaysian Borneo. The Kinabatangan alone provides habitat for some 314 bird species, 215 mammal species and 101 reptile species. Here are just some of the remarkable animals whose home range you could protect by supporting this project.

A conservation legacy for people and planet

In both 2013 and 2017, WLT supporters came together to save land right here, in the green heart of the Kinabatangan. You now have the chance to build on this legacy. And that’s not all – if our appeal reaches beyond its initial target, HUTAN will be able to secure further properties to expand their corridor network.

This is land where the one of the world’s most trafficked animals, the Sunda Pangolin, has a safe home. This is land where HUTAN are reforesting former oil palm plantations and building nestboxes for Critically Endangered hornbills. Our partner’s work is truly transformative, and thanks to them, this wild corner of Malaysian Borneo has a bright future. We hope you will join us there.