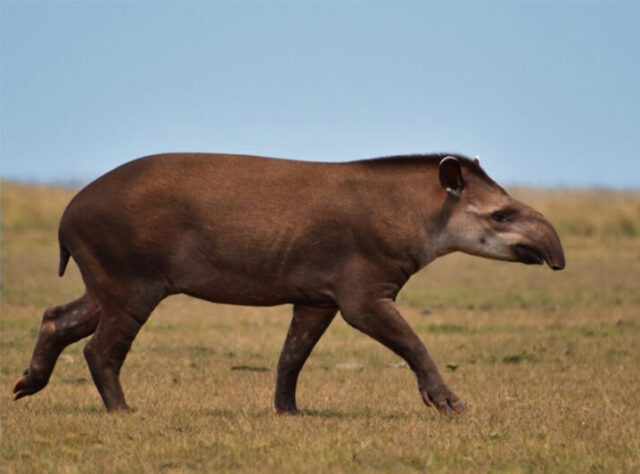 Lowland tapirs are known as “gardeners of the forest” due to the important role they play in seed dispersal. Image: Teodoro Camacho / Asociación Armonía

A lot has changed in the world over the last six years, but one thing has remained virtually unchanged: the absence of Lowland tapirs in Bolivia’s Barba Azul Nature Reserve. Since 2014, South America’s largest land mammal had been spotted just once within the boundaries of the reserve, which comprises an important portion of the country’s Beni Savanna ecoregion.

That all changed this year, when the tapir and its distinctive prehensile snout were sighted once again by rangers from Asociación Armonía, a World Land Trust (WLT) partner organisation. Wonderfully, the reappearance of Tapirus terrestris is just one of a number of signs that point to a truly flourishing ecosystem here in the wilds of northern Bolivia.

Barba Azul was created in 2008 to protect the critically endangered Blue-throated macaw, but the reserve’s forests, marshlands and savanna harbour a variety of other species as well. Jaguar, Puma, Maned wolf, Giant anteater (like the one featured in the video above) and Black howler monkey are all found here, as are some 300 species of bird, with the tall grasses protecting rare savanna species like the Cock-tailed tyrant and Black-masked finch.

To protect the rich biodiversity of Barba Azul and the Laney Rickman Reserve – the latter of which provides the most important known nesting area for the Blue-throated macaw – Asociación Armonía have had to battle blazes while dealing with the logistical challenges posed by the coronavirus pandemic. Strict lockdown regulations and travel restrictions have hampered Armonía’s ability to manage their reserves, while ranger César Flores was forced out of action following a COVID-19 diagnosis. 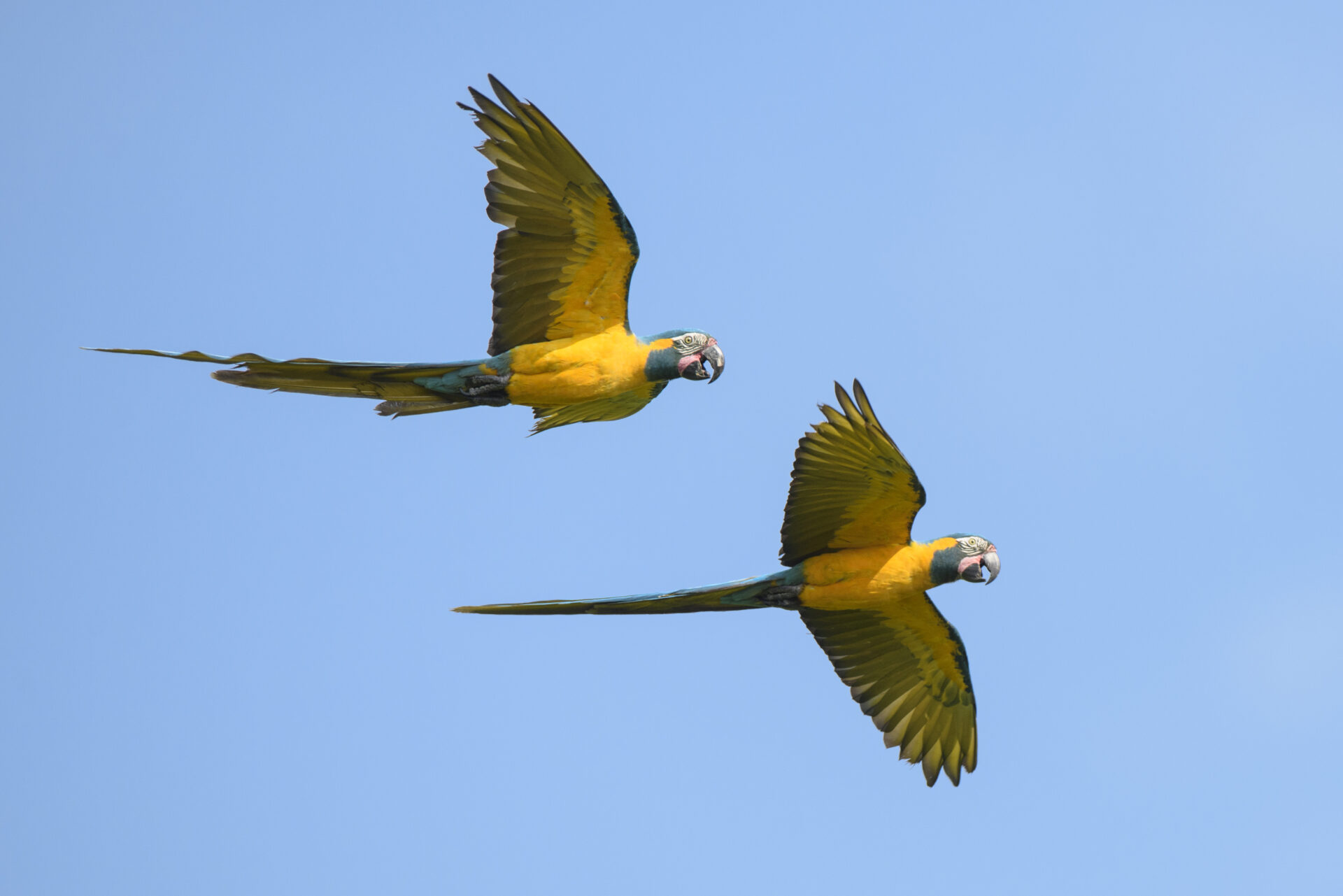 There are thought to be just 450 Blue-throated macaws left in the wild, all of which live in northern Bolivia. Image: Gerrit Vyn

Fortunately, César recovered from the disease and was soon back in the field, a testament to his love for Bolivia’s biodiversity. Together with his son César Jr., he was involved in crucial fire management work during a run of extremely dry months, which you can read about in our recent news story. Thanks to their efforts, the habitat of the critically endangered Blue-throated macaw has been saved for another season.

In addition to fire management, the Asociación Armonía team have been busy installing a number of “penthouse” nestboxes in the Barba Azul Reserve, in the hopes that Blue-throated macaws will start to breed here.

The location of the birds’ nests remained a mystery until two expeditions into the Beni Savanna eventually provided the answer: dead moriche palms. These leafless and lifeless trunks, known as snags, can be found sticking out of the grasslands like upended toothpicks. The macaws, the expeditions found out, nest at the top of the palms and in sideways-facing holes further down the trunks. As these trees are absent from Barba Azul, Armonía hope that the nestboxes will serve as a convincing substitute for expecting macaw parents. 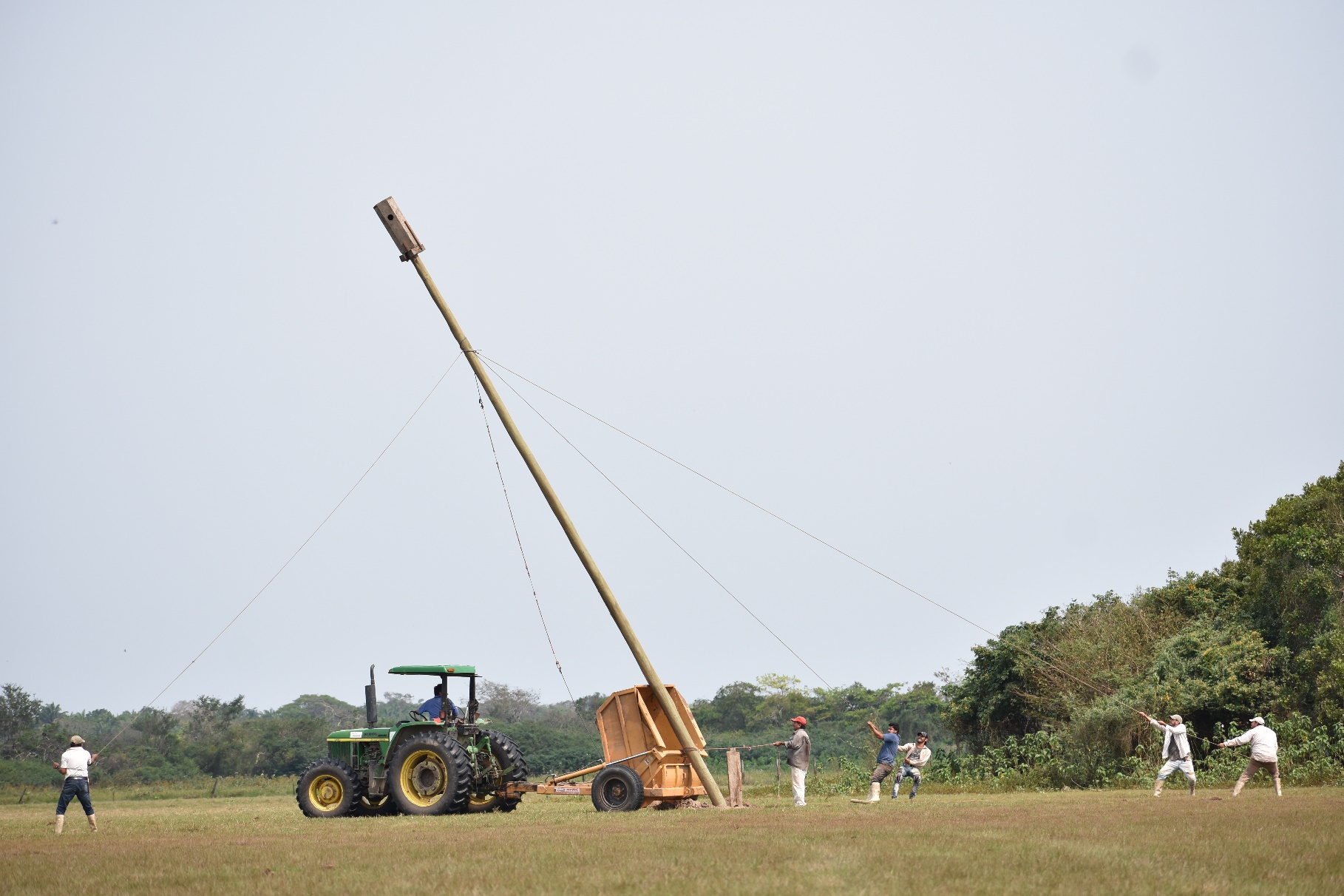 In August, locally based ranger Luis Miguel Ortega was able to travel to Barba Azul, and he soon made a fascinating discovery that bodes well for the Blue-throated macaw. Instead of flying north to roost after a day of foraging, many of the macaws instead chose to spend the night on the forested island of Isla Barba Azul.

This is a very promising development, as the more time the birds spend in the reserve, the safer they will be from hunters and illegal pet traders. It’s possible that the nearby presence of the new nestboxes has made the macaws feel more at home. If Barba Azul is adopted as a new breeding ground, they can be protected here for their entire life cycle, securing the safety of future generations. 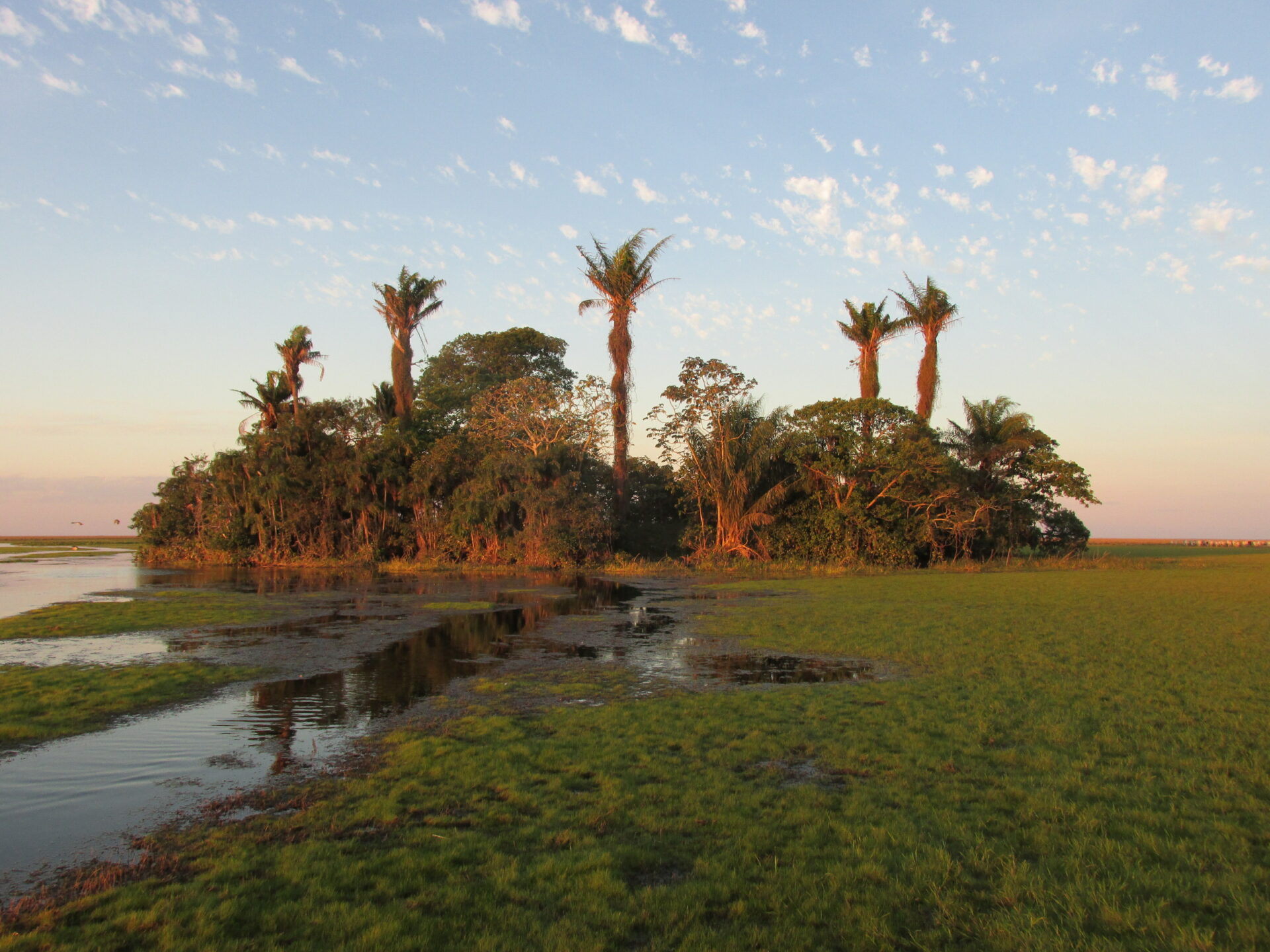 Seasonal flooding in Barba Azul creates the perfect environment for a particular type of shorebird, one listed as ‘Highly Imperiled’ by the U.S. Shorebird Conservation Plan and “Near Threatened” by IUCN. Flocks of Buff-breasted sandpipers make an important stop-off in Barba Azul on their annual southerly migration, and the research done here by Armonía is crucial to their continued survival. This year, the monitoring team spent the whole of September recording data on everything from dung piles to grass length, which will help them to assess the health of this long-distance migratory species and its habitat. 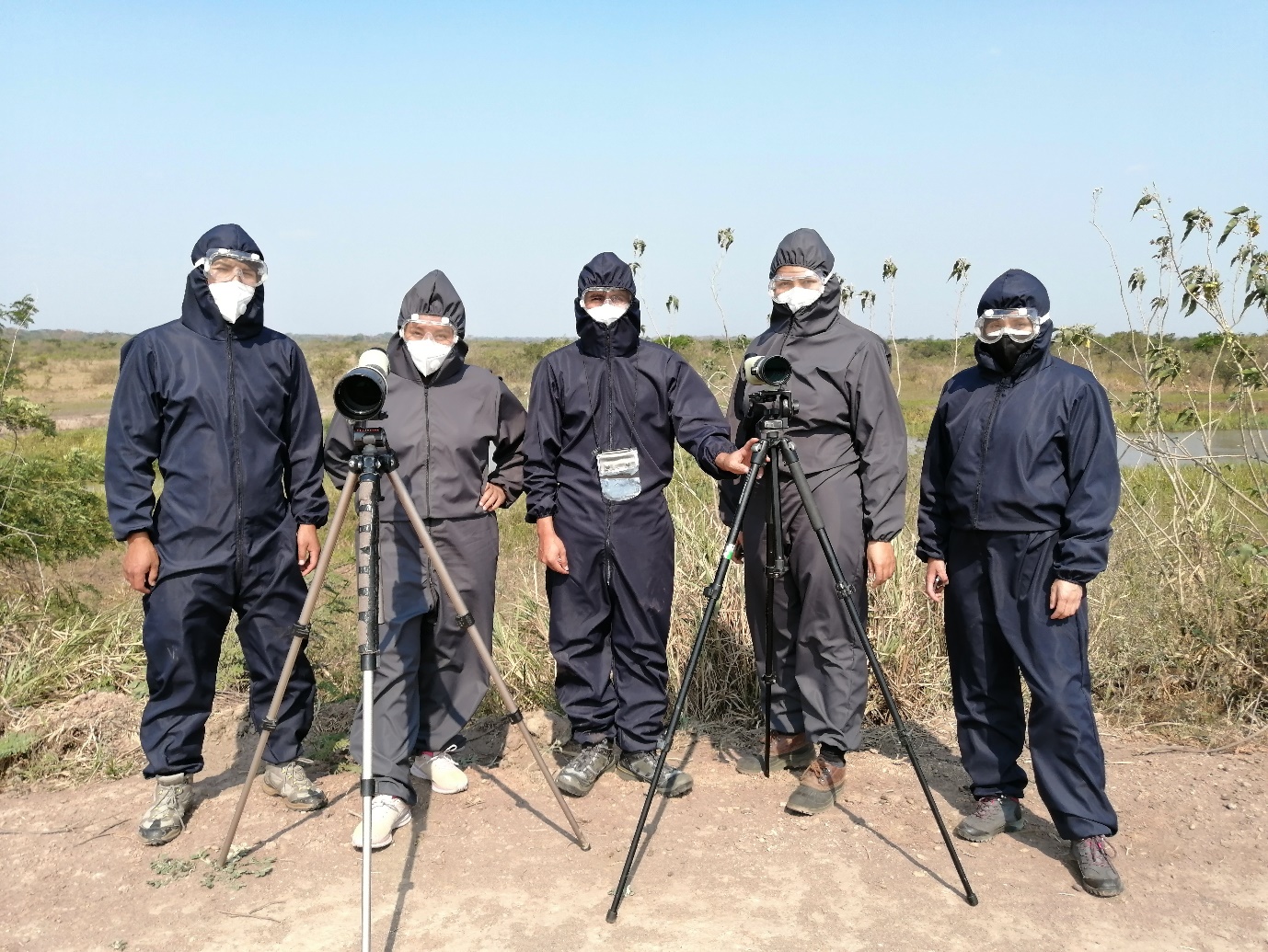 The conservation successes that Asociación Armonía have recently enjoyed look set to continue, thanks to the support of the WLT and our fantastic donors. Donations to our Action Fund can be used to fund urgent responses to wildfires, while our Keepers of the Wild programme provides Armonía’s rangers with essential field equipment.

In the face of wildfires and a global pandemic, the Beni Savanna is thriving. If this is to continue, the ecosystem needs our help. Your support to our Action Fund can help the pulse of life beat through the land for another day; a new chance for an avian haven home to the critically endangered Blue-throated macaw.

It’s #NotTooLate to be nature’s champion in its time of need – donate to our Action Fund today! Dutch biologist Tjalle Boorsma always thought his career would lead him to the tropical rainforests of the world. His love …