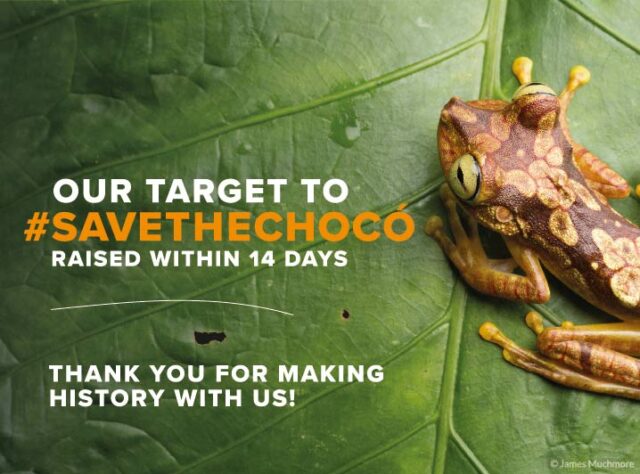 The astonishing show of support for WLT’s #SaveTheChocó campaign means it will be possible to keep the appeal open and protect even more of these rainforests in Ecuador from relentless logging. Image credit: James Muchmore.

World Land Trust is humbled by the staggering show of support from our donors over the past two weeks. In barely a fortnight, a surge of donations has propelled our latest campaign past its target – a victory, and example of conservation optimism, for a critical area in one of the world’s most biodiverse and threatened places.

This month, thousands of concerned people and organisations across the globe made history as they rallied behind our ‘Saving Ecuador’s Chocó Forest’ appeal: a campaign to back our partner Fundación Jocotoco as they purchase and protect the largest remaining tract of these rainforests in the Andean country.

A surge of matched donations meant the appeal took only 14 days to reach and has now exceeded its initial £500,000 target, achieving this milestone on the very last day – 14 October 2020 – of WLT’s Big Match Fortnight. 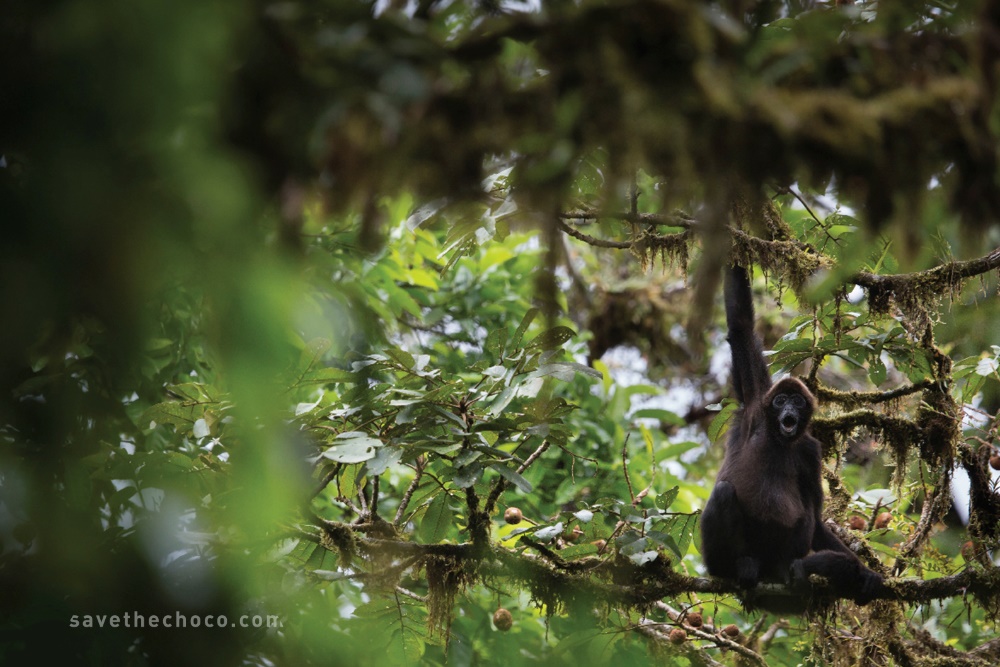 The generous support from thousands of people worldwide will allow to protect one of the most biodiverse and threatened forests on Earth, home to 160-200 of the ~500 Brown-headed Spider Monkey left in the wild. Image: James Muchmore.

“Over the decades we have witnessed time and time again our supporters’ commitment to nature but nothing could have prepared us for the response this month to the plight of the Ecuadorian Chocó – we are incredibly grateful,” says Dr Jonathan Barnard, CEO of WLT.

“To reach our initial target so quickly was only possible through the generosity of our supporters, all the more astonishing in a year like 2020, which has been extremely difficult for so many people,” Jonathan adds. “In these tricky times, you found the time and money to support this campaign, you put your trust in us and our partner Fundación Jocotoco and we will repay it – by ensuring the forest purchases result in the protection of this critical habitat.”

Buoyed by the fortnight of matched donations, this global movement for the Chocó has put WLT in an incredible position. Having seen such surge of interest – and being in the fortunate position that if we raise more funding we can help our partner buy more land – we have decided to keep our appeal running for the foreseeable future so that others can still be part of this inspiring project.

As we previewed when our campaign launched, the initial £500,000 target was meant to fund a part (at least 1,668 acres/675 ha) of the total forest area (57,000 acres/23,067 ha) Fundación Jocotoco wants to purchase and protect. Now that our initial target has been reached, keeping the appeal open means we can make even more of a difference for the Chocó than WLT had initially envisioned. 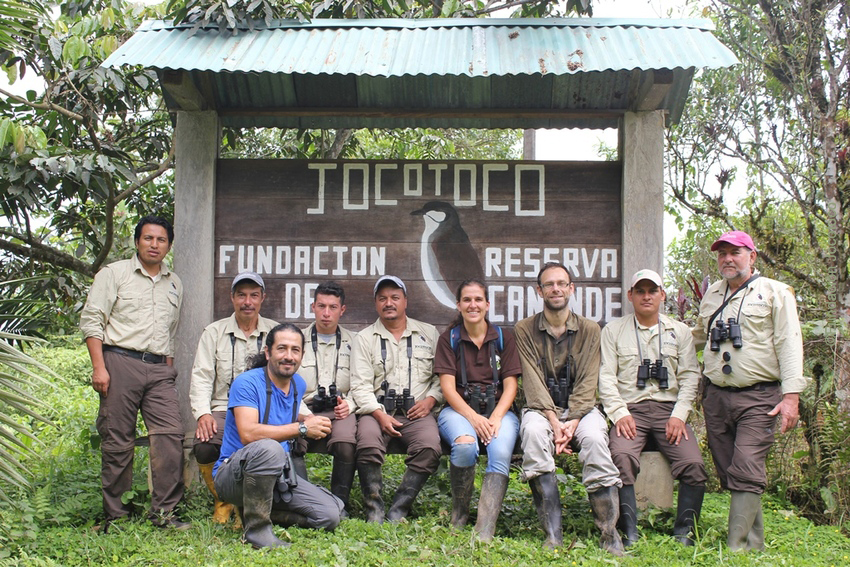 Funds from WLT’s appeal will help expand the Canandé Reserve, where rangers have worked tirelessly to protect Jaguar, 375 bird species and the greatest amphibian and reptile diversity west of the Andes. Image: Fundación Jocotoco.

“Because of you we can now aim even higher than we’d thought possible: we can raise beyond our initial target and help Fundación Jocotoco save more of the last 2% before oil palm plantation owners and others can act,” Jonathan says. “Our partner can now go further, faster and do more – more acres of rainforest safe in their hands, more species protected from intensive logging.”

“The scale of this new conservation victory cannot be overstated,” our CEO adds. “Let’s remember the facts about the forest you have helped save: this is a place as biodiverse as the Amazon but far more threatened, an ecosystem with more bird species than the whole of Europe and more plant species than anywhere else in the Americas.” 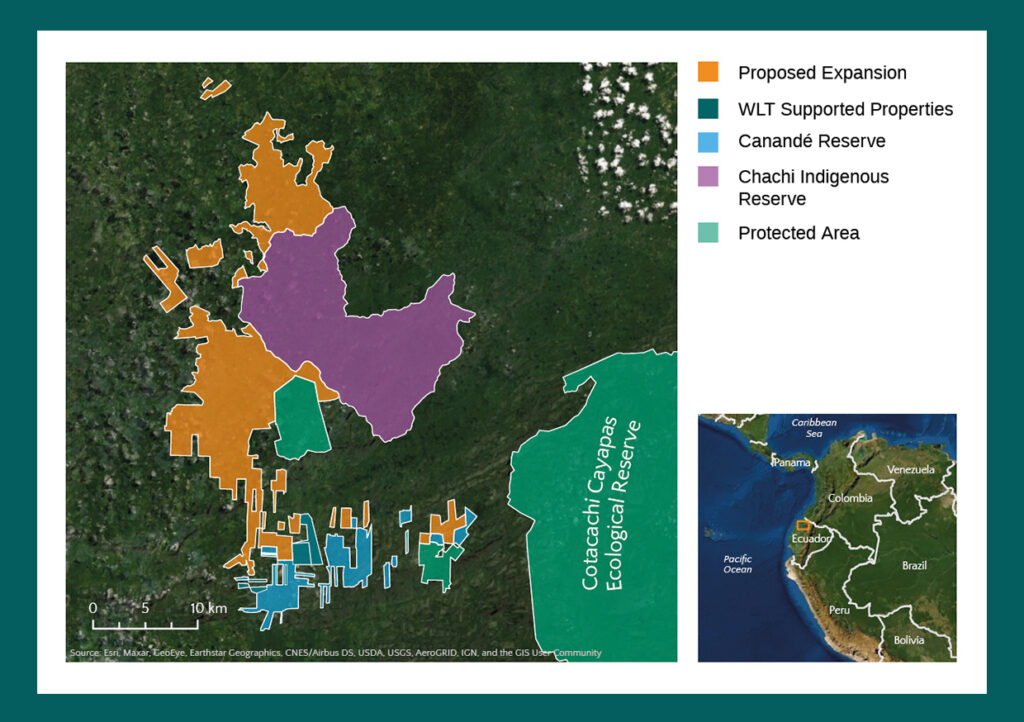 The push to safeguard the last 2% of Ecuador’s Chocó forests garnered the support of a global coalition of individuals. Award-winning musician Sarah Class generously donated her music to become the soundtrack of the campaign, while countless other people launched individual fundraising challenges that were crucial to the appeal’s success, like Andy Langley’s sponsored birdwatching expedition or Dom and Jude’s big tree plant.

Now that WLT’s Big Match Fortnight has concluded, the extended ‘Saving Ecuador’s Chocó Forest’ appeal will continue accepting donations for the foreseeable future; a chance to see how much we can raise together for this amazing forest. For more information on what the campaign will achieve for this natural wonder in Ecuador, check our stories about Fundación Jocotoco’s plan as well as its benefits for conservation, communities and climate.

The astonishing generosity of our supporters in just a fortnight has opened a chance to make even more of a difference for the last 2% of Ecuador’s Chocó forests. You are still in time to join us as we continue making history for this global biodiversity hotspot, and we go further to save endangered species from an extinction cliff.

By supporting our ‘Saving Ecuador’s Chocó Forest’ appeal, you can help it last forever.