South Africa is home to an astonishing amount of biodiversity, on land and at sea. 10% of all known plant species are found here, many restricted to an area of the Cape that comprises one of the world’s six floristic kingdoms. The waters around South Africa harbour around 15% of the world’s marine species, while the country’s range of terrestrial biomes range from forest and grassland to desert, savanna, and the unique bushveld and fynbos.

Protected areas like the famous Kruger National Park provide habitat for some of Africa’s most iconic animals, including cheetah, ostrich, hippo, zebra, giraffe, and the Big Five. Meanwhile, the meeting of major oceans and current systems offshore makes South Africa a prime destination for hungry sharks, seals, whales, dolphins, penguins, and seabirds. This is also a place that boasts a high rate of endemism, with 56% of its amphibians and 70% of its invertebrates found nowhere else on Earth.

In a 2019 study, the South African National Biodiversity Institute found that nearly 14% of the country’s species, and half of its ecosystems, are under threat. One of the major pressures comes from habitat loss and degradation driven by mining, agriculture, urban development, and other land use. Connecting existing protected areas will be key to ensuring the survival – and continued genetic diversity – of South Africa’s vibrant wildlife.

Our partners in South Africa

Explore the Greater Ukuwela Nature Reserve with our interactive map

Located on South Africa’s ‘Elephant Coast’, the vision for this project is to secure the gap between two large protected areas, creating a single contiguous protected landscape almost 1 million acres in size. The Greater Ukuwela Nature Reserve will serve as a crucial wildlife corridor, providing habitat for over 1,200 species including lion, leopard, elephant, cheetah, Painted Dog, and the Critically Endangered Black Rhino.

Once earmarked for pineapple production, the land here now has the highest level of legal protection under South Africa’s Protected Areas Act. Part of the reserve is utilised by local people for fishing, cattle grazing, and reed and water collection. Our project partner, Wild Tomorrow Fund South Africa, is heavily involved in community work in and around the reserve. Food, employment, teacher stipends, and even a brand new school have all been provided since they began work here. 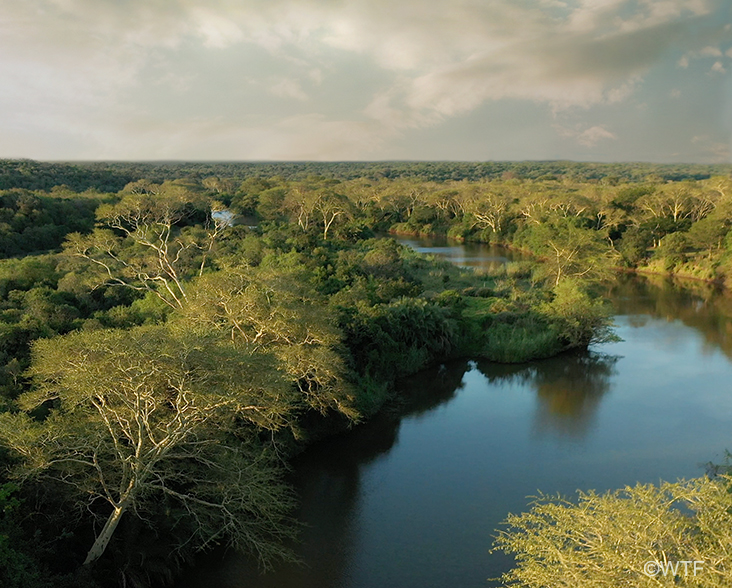 Get the latest news from our South Africa projects