The Green Barbet is 17–18 cm in length and weighs 40–60 g. The nominate race is plain olive-green above, olive-grey below, with a blackish-brown nape, grey ear-coverts, and a hint of yellow-green behind the dull reddish eye. Both sexes are alike. Woodward’s Barbet differs by having a yellower and more distinct patch behind the eye, a dark forehead and lores, and a more keel-like base to the culmen.

Green Barbets are social birds, moving around and nesting in groups of 3-8 individuals. They also sometimes forage in mixed-species flocks along with orioles, starlings, helmetshrikes, flycatchers, and drongos.

This species is mostly frugivorous, feeding largely on various species of fig as well as berries, regurgitating the stones of larger fruit. But they will eat arthropods too, gleaning foliage and flycatching for beetles, roaches, termites, and moths, and have also been recorded taking molluscs such as the Yellow Slug (Limacus flavus).

Breeding occurs from September to April. Pairs bond with a variety of displays and postures including spreading the rump, face and crown feathers, wing fluttering and bill wiping, as well as by courtship feeding.
Groups defend a territory of 10–25 ha, and breeding pairs call as a duet, uttering loud “chowp” and “chuk” notes, often countersinging against other barbet species such as Black-collared barbet (Lybius torquatus).

The nest hole, excavated by both sexes of the breeding pair, is 5 cm wide and 60 cm deep and situated at a height of between 3-22 m on the underside of a live branch or dead trunk. The clutch of 3–6 white eggs is incubated for 18 days by both parents, with change-overs every 30 minutes.

Both parents and well as non-breeding adult helpers in the group feed the young for 30-35 days, firstly with insects, then fruit. Adult helpers also guard the nest hole against the parasitic Lesser Honeyguide (Indicator minor )and competing barbet species. 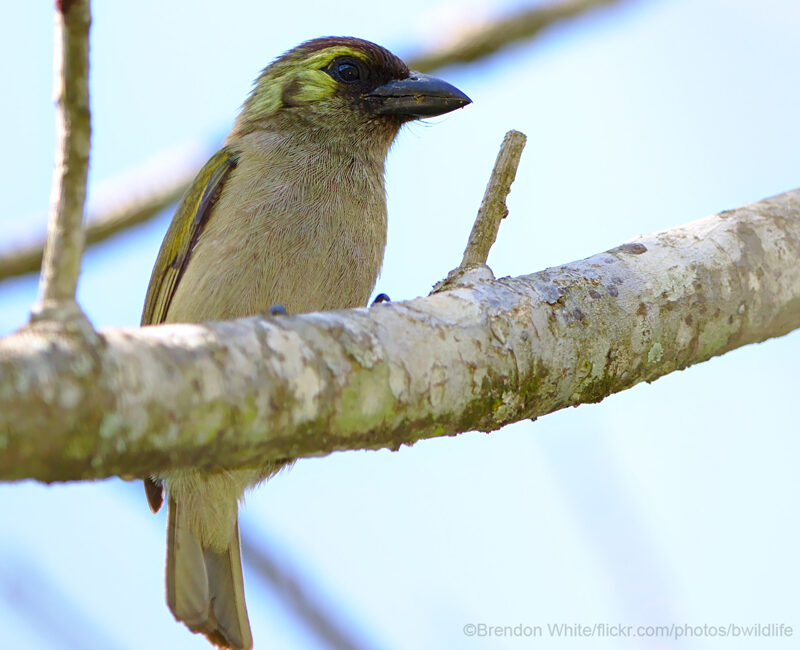 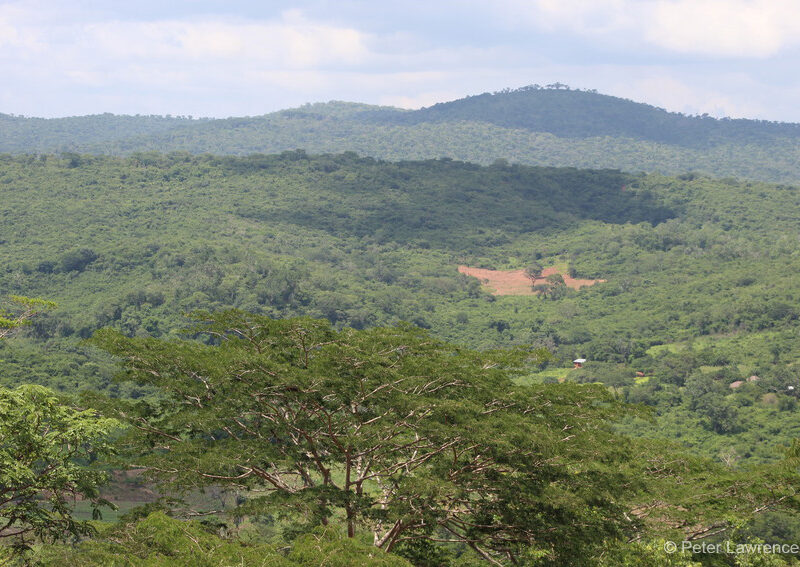 Green Barbet is a forest species, inhabiting wet and dry forest, especially where there is an abundance of figs, in lowlands and hills up to 2,000 m.

The population size of the Green Barbet has not been determined but is suspected to be declining due to forest clearance, competition from other barbet species and woodpeckers, and from brood parasitism by honeyguides. They have a very large range and are locally common and therefore listed as Least Concern on the IUCN Red List.

Woodward’s Green Barbet, however, is very range restricted. Population data of this race are scarce, but in South Africa’s Ngoye Forest they are thought to number only around 1,000 individuals or 300 pairs/breeding groups, with a density of one pair per 4–5 ha. Furthermore, in South Africa they are found only in the Ngoye and not in other forests in the area, probably due to the high fig diversity found in the Ngoye providing a year-round food supply.

Conservation of forest habitat in Tanzania and South Africa, and the fruit trees on which they depend, is of crucial importance. In Tanzania and starting in 2021, WLT is supporting a project by partner TFCG, to save coastal forests that are a confirmed home for the Woodward’s Barbet.