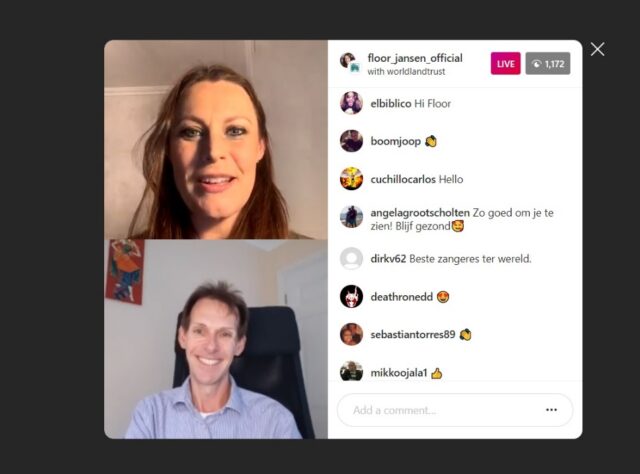 The Instagram Live chat saw Nightwish singer Floor Jansen learn about the forest the band has helped save in Mexico and share her own stories of what nature means to her. Image: World Land Trust.

The Instagram chat, streamed live on Friday 30th October and now available on YouTube (see below), was followed by nature supporters from all across the world.

Broadcasting live from Sweden, Floor Jansen was joined by WLT CEO Jonathan Barnard from the UK and GESG General Director Martha Isabel “Pati” Ruiz Corzo and GESG Head of Conservation Roberto Pedraza Ruiz, a mother-and-son conservationist duo who tuned in from Mexico’s Sierra Gorda. The Dutch singer, Nightwish’s lead vocalist, was told of the endangered forests the band has helped save.

As Pati and Roberto explained, Nightwish’s donation earlier this year has allowed GESG to expand the Sierra Gorda Biosphere Reserve by purchasing and protecting new land – and not just any land.

The new property that will bear Nightwish’s name is a tract of spectacular temperate cloud forest, a canopy dominated by oak and threatened tree species including the Mexican white cedar (Cupressus lusitanica) and recently described species of agave (Agave gracielae) and pink flowering cactus (Mammillaria rzedowskiana).

The wildlife roaming under these mist-shrouded sentinel trees is no less astounding. Speaking to Floor, Pati and Roberto from GESG listed the species that Nightwish has helped safeguard: within the property, Puma (Puma concolor) prowl alongside fellow big cats Jaguar (Panthera onca) and Ocelot (Leopardus pardalis), weasel-like Tayra (Eira barbara) and birds such as the Crested Guan (Penelope purpurascens).

Speaking to Floor as the Instagram Live chat kicked off, WLT CEO Jonathan Barnard started by thanking the singer and Nightwish more broadly for their championing of threatened habitats.

“We’re honoured to have had your incredible support to nature this year, through your actions in Mexico and your fantastic album Human. :II: Nature – a reminder that we’re all part of the same thing,” Jonathan told Floor. “One of the things that WLT does is showing that collective action matters – no matter how small our contribution may be, when we come together we can make a positive change and save these places around the world.” 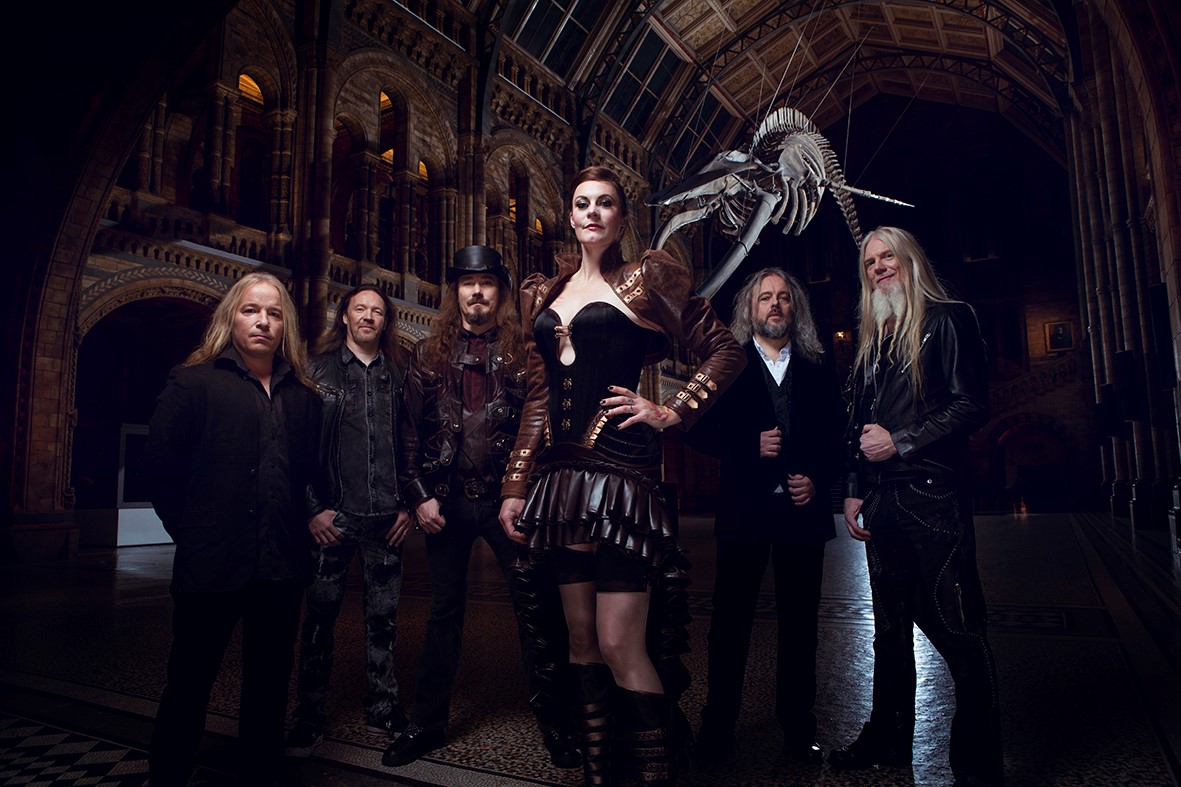 For her part, GESG’s Pati struck an emotional note as she addressed Floor and thanked Nightwish for their support to Sierra Gorda. Sat alongside Roberto, the GESG founder and former music teacher sang live the opening lines of the ‘Yo vengo a ofrecer mi corazón’ hit of Argentinian singer Mercedes Sosa – ‘Who says everything is lost? / I’ve come to pledge my heart’ – and spoke about inspiring a new generation into conservation.

“We need to remember that wealth is not about having more; it is about living with little,” Pati said. “Let’s reduce our consumption, let’s move towards a more frugal existence, let’s connect with nature and come back to the pleasures of a simple life. We have to put this society on the right path again because our children are in a shopping centre.” 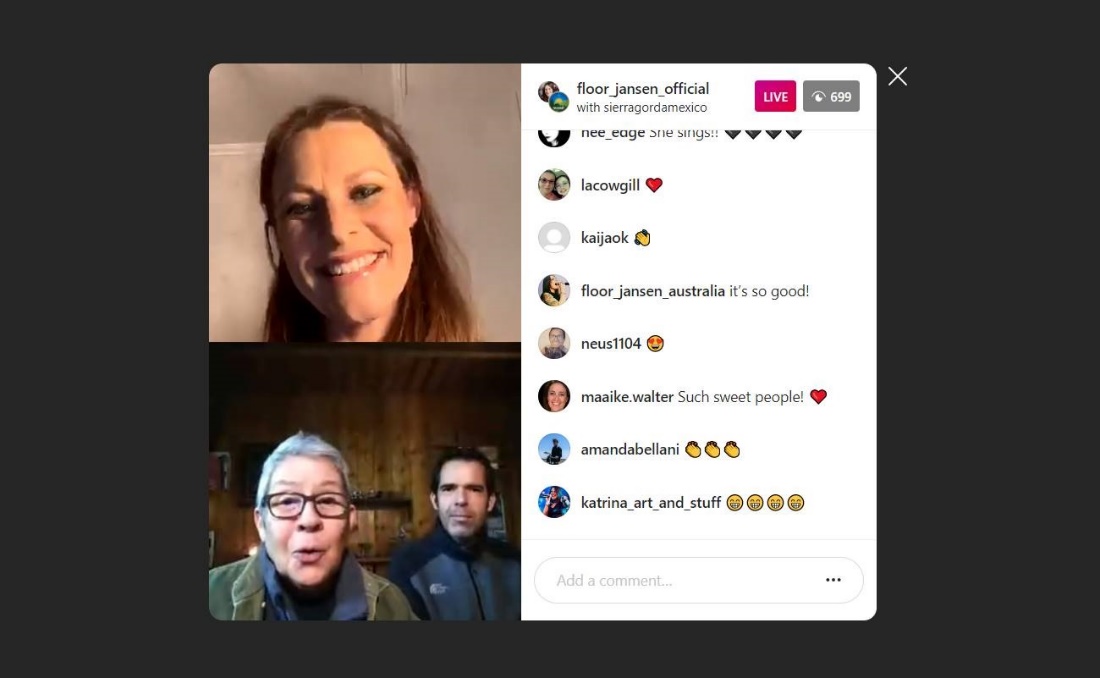 Nightwish’s Floor and GESG’s Pati exchanged views about how to inspire a new generation into reconnecting with and caring for the natural world. Image: World Land Trust

Floor echoed the sentiment. “I agree that we have to reconnect – to experience the joy of looking at the stars, the awareness of birdsong and the other small things that are there all the time. Nature is everywhere but you just need to see it and I think we’re not taught that anymore,” Nightwish’s lead singer remarked, adding: “We don’t need to be entertained by shopping malls or computer games – a simple walk in the forest will do.”

Told by Pati and Roberto about GESG’s plans for a plaque with Nightwish’s name at the reserve, Floor said she hoped she would be able to visit the forest eventually, and be part of the natural world Nightwish have helped save.

“Myself, and I know all members of the band, we all enjoy being in nature so much, we cannot function without it … and to have been part of its protection in Mexico is a true honour. Once again and on behalf of Nightwish, thank you so much,” the singer said.

The chat gave GESG’s Pati and Roberto a chance to share stories of one of the most special wild residents of the forest Nightwish have supported. Once classified as ’Possibly Extinct’ by the International Union for Conservation of Nature (IUCN)’s Red List, the exceptionally rare Big-footed Salamander (Chiropterotriton magnipes) was rediscovered near these forests in 2017 – photographs from Roberto at a nearby cave confirmed extinction fears were, so far, not warranted. 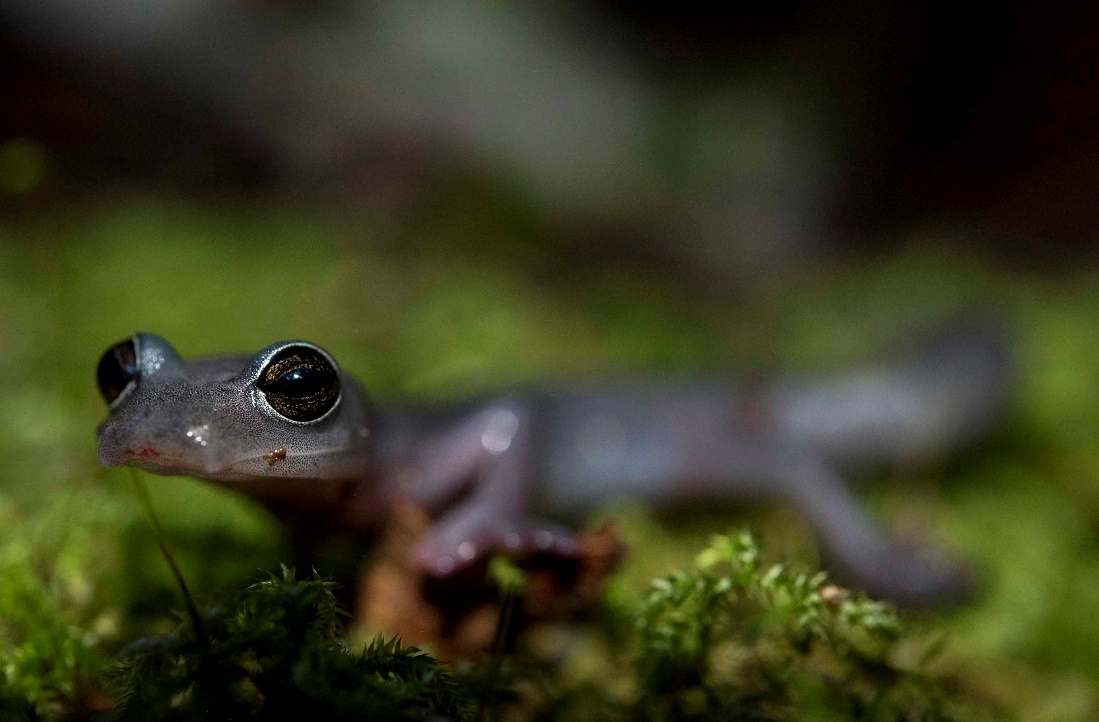 The similarities between the Nightwish-backed property and the habitat where the Big-footed Salamander was rediscovered in 2017 makes our partner GESG optimistic that the species will be sighted here once more. Image credit: ©Roberto Pedraza Ruiz.

“To think that this species had already been added to the list of probably extinct species, but we found it again,” Roberto, who has grown up in these mountains, would recount shortly after the 2017 rediscovery. “A true daughter of Mexico’s forests, the result of millions of years of evolution, natural selection and adaptation, is still here, surviving in the misty peaks of the Sierra Madre.”

The hope now is of a repeat of Roberto’s milestone of 2017 – to spy the Big-footed Salamander’s webbed feet in the newly purchased property. There are grounds to feel optimistic, given that the habitat in the new reserve – a karst wonderland of towering limestone caves – is identical to that where the so-called forest daughter was rediscovered three years ago.

Nightwish’s generous support to WLT’s work follows the launch in March 2020 of a joint collaboration alongside the band’s Human. :II: Nature album release – a partnership that saw new single ’Ad Astra’ music added to a video highlighting WLT’s support to GESG work in Sierra Gorda. You can watch that video here.

With their support to the cloud forests of Mexico’s Sierra Gorda and WLT’s Action Fund, Nightwish have delivered a conservation win for threatened ecosystems. This year you can join them, and us and our partners, as we continue supporting nature through our Action Fund – a programme that allows us to bring conservation action to wherever and whenever it is most needed.