From Extinction Fears to a Safe Home: A New Corridor for the Chacoan Peccary SEARCH NEWS 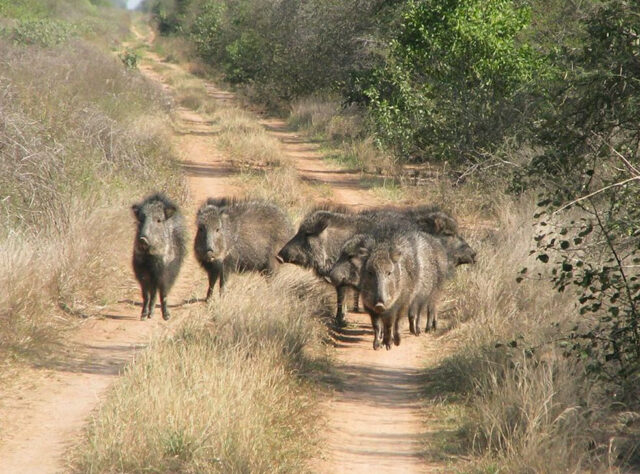 The Chacoan Peccary of Córdoba Province are highly threatened and cut off from populations elsewhere, making an intervention all the more urgent. Image credit: Marianela Velilla / Guyra.

The Chacoan Peccary faces a future of stark decline worldwide but World Land Trust (WLT) partner Fundación Biodiversidad Argentina (FBA) has a plan to boost conservation. The proposal to create the Chaco Taguá Biological Corridor with support from our Buy an Acre programme will safeguard nature in a province where less than 5% of native forests remain.

Those looking today for iconic species in need of urgent conservation intervention need to look no further than the Chacoan Peccary (Catagonus wagneri).

These social boar-like mammals are so elusive they were first discovered via centuries-old fossil remains, a relic of a species scientists thought was long extinct. The first sighting of live individuals in Argentina’s Chaco around 1970 was not kind on the Chacoan Peccary: hunting and habitat destruction combined to push the species into Endangered status, with populations expected to halve within three generations.

Chacoan Peccary’s main vulnerability is its already restricted home habitat and this is precisely what FBA wants to change. The WLT partner’s plan is to fight back against logging and poaching via the Chaco Taguá Biological Corridor – a series of properties that will be purchased in the Córdoba province to link the Traslasierra National Park and Chancaní forest reserve. 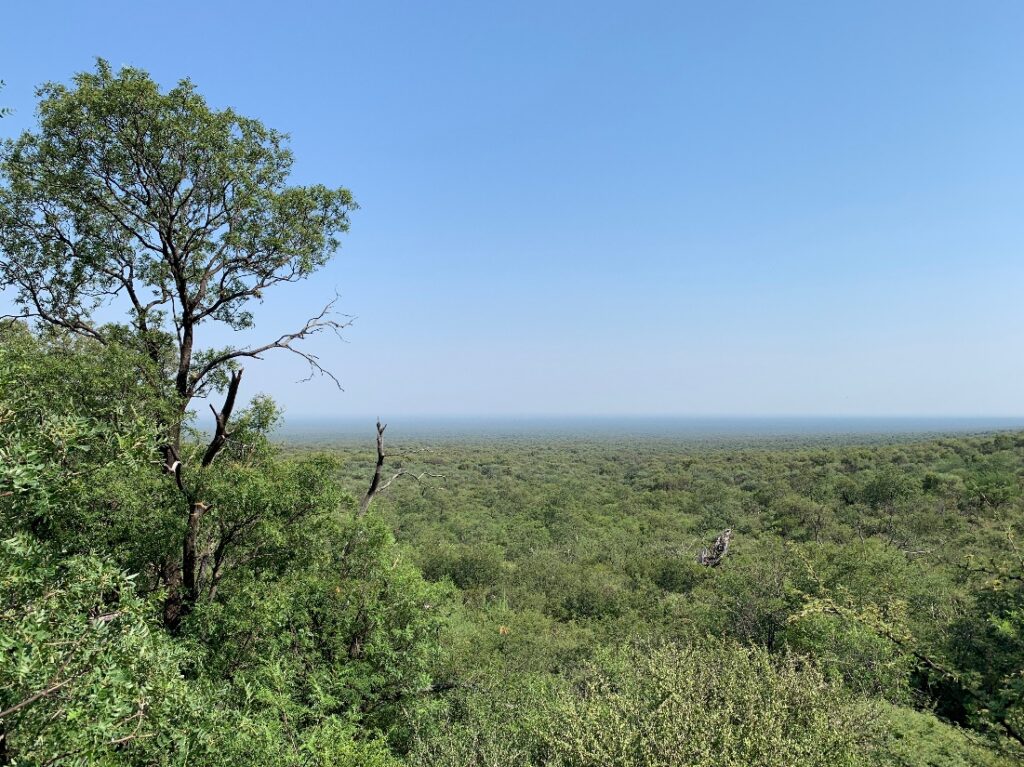 As FBA President Tomás Waller explains, intervening is essential given that the area’s Chacoan Peccary – known by locals as chancho quimilero – are both highly threatened and cut off from populations elsewhere. “The existing population is very residual, just a minimal number of individuals in and around the Córdoba province,” Tomás adds.

Isolation is also a problem for the Chaco’s Guanaco (Lama guanicoe) in and around Córdoba, unable to reach their peers to the north and south. “That’s another reason why this corridor is so important,” Tomás points out. “The Guanaco are essentially gone from the Argentinian Chaco and yet this area is home to a few groups, roaming just to the north of the Traslasierra National Park.”

Safeguarding the last 5% for endangered species

Figures help underscore the importance of preserving this particular stretch of Argentinian Chaco through the Chaco Taguá Biological Corridor, which WLT will back by funding the purchase of some 13,096 acres (5,300 hectares) of protected land.

Logging, wildfires and urbanisation have razed the native forests of Córdoba Province to such an extent that only 5% remains. Acting now to protect what is left is key given the prospect of increased human activity, Tomás says, adding: “It might be a dry area but the mountains nearby do offer water to farmers and cattle owners, which creates a risk of more people coming in to alter the landscape.”

Decisive action will help far more than the Chacoan Peccary and the Guanaco. The land proposed for the corridor is home to populations of Puma (Puma concolor) and two endangered bird species: the Crowned Solitary Eagle (Buteogallus coronatus) and a striking yellow passerine from the tanager family (Thraupidae), the Yellow Cardinal (Gubernatrix cristata) which is thought to face a risk of extinction. 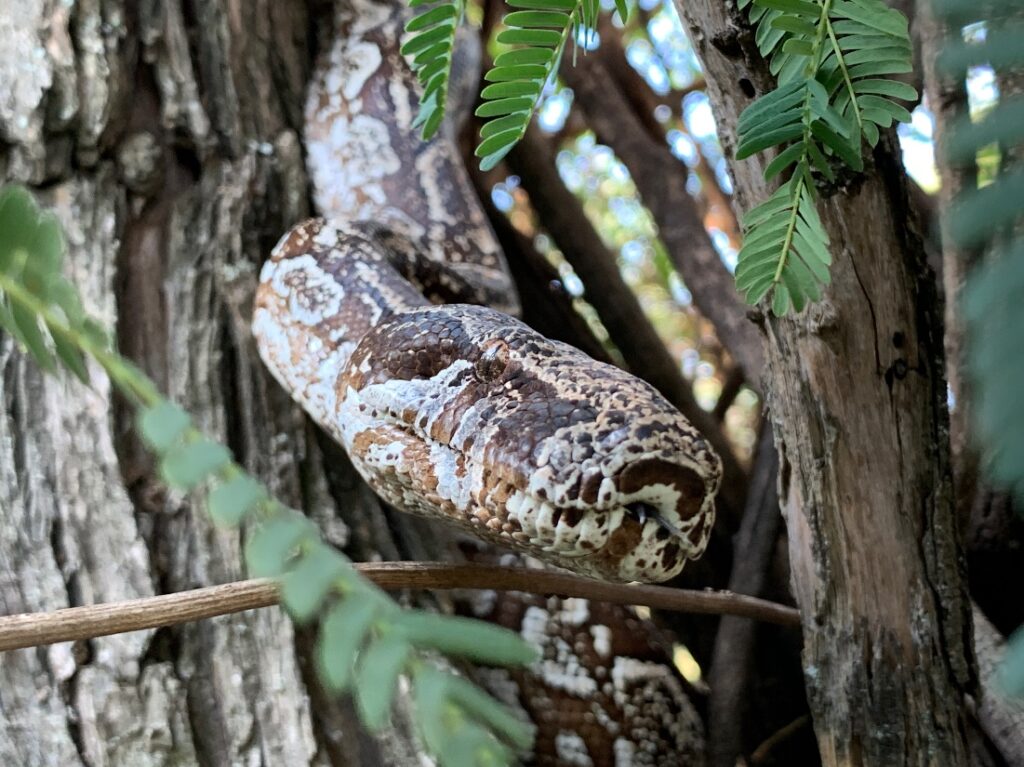 Among the area‘s reptile species is the Argentine Boa Constrictor, which FBA‘s Tomás Waller himself crossed paths with during a visit to the proposed corridor. Credit: Tomás Waller / FBA.

The trove of life extends to amphibians and reptiles, including the Chaco Land Turtle (Chelonoidis chilensis). Tomás points at the Chaco Rainbow Boa (Epicrates alvarezi) and the Argentine Boa Constrictor (Boa constrictor occidentalis). FBA’s President himself came across a Boa Constrictor during a visit to the proposed corridor, and used his camera to snap the animal before it slithered away.

However eye-catching, these iconic species are but a small sample of the biodiversity the Chaco Taguá Biological Corridor would help. Over at the neighbouring national park of Traslasierra, rangers have recorded 229 species of birds, 35 species of mammals and 43 species of amphibians and reptiles.

The Chacoan Peccary walks the Earth so lightly it was once thought to be extinct, and today its fate looks uncertain. Its Chaco home may be small but there is a chance to expand and protect it – with your help.

Read more about Buy an Acre

By supporting our Buy an Acre programme, you can assist our partner FBA as it creates the Chaco Taguá Biological Corridor, a bridge for nature to be safe from human activity.

Donate today and safeguard the future of threatened species in Argentina!