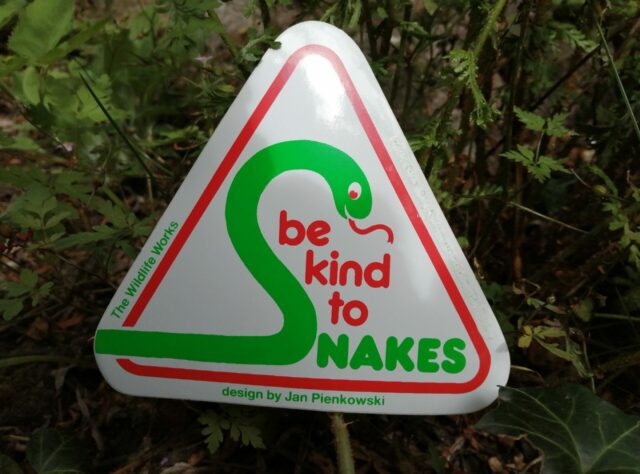 Anthropologist and animal behaviouralist, Lynne Isbell at the University of California, estimates that around a third of people worldwide are terrified of snakes, or to give it its proper title, are ophidiophobic. That’s about the same as those who are spider-phobic (arachnophobic). If you are one of these people perhaps just once a year, on World Snake Day, we can persuade you to think again about these much maligned, but very important, companions on our planet.

There are many things to appreciate about snakes, foremost is the role they play in maintaining the balance in the ecosystem. They are nature’s natural pest controllers and in many parts of the world they fulfil a huge environmental service by keeping down numbers of their prey species, such as rats and mice, which would otherwise increase to unnatural levels, with the associated health threats. For this reason, in some parts of the world such as India, they are often protected. In the images below we hope you will be able to appreciate snakes for their beauty too. They come in a kaleidoscope of colours and textures, flaunting iridescent scales, brightly coloured patterns, and  remarkable abilities. There are flying snakes, burrowing snakes, totally marine snakes and snakes that can ‘sidewind’ across loose desert sands.

Rivalling a tiger, this Rainbow Boa is resplendent in oranges and browns. 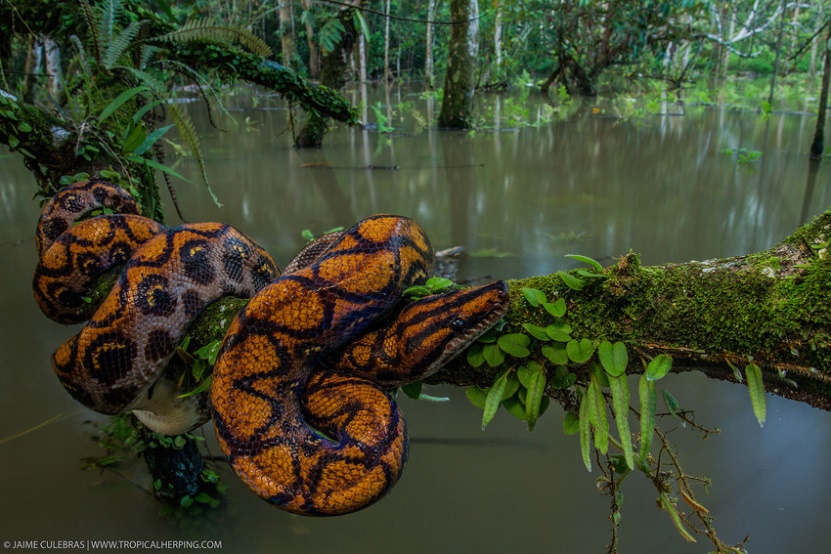 The Rainbow Boa (Epicrates cenchria) is one of the most beautifully marked of all snakes. They occur from Costa Rica south into South America, on the eastern side of the Andes. This image was taken on Natura e Cultura Ecuador’s Nangaritza reserve. Image credit: Jamie Culebras/tropicalherping.com

The lush foothill of Nangaritza Valley’s humid woodlands and rain forests are loved by Rainbow Boas. This reserve protects the last remaining extensive band of forest connecting the Andes mountains around Ecuador’s Podocarpus National Park with the Amazon in Peru. Connecting the high Andes to the Cordillera del Condor mountain range and the Amazon forest beyond, this corridor of forest is unique as other Amazonian foothill forests have been lost completely or degraded by cattle grazing.

Because of their spectacular iridescence and colouration Rainbow Boas are one of the most sought after for the pet trade and over collection, together with forest destruction and development, has seen a significant decrease in populations. They play an important role in controlling rodent populations where they occur. In common with other boas, they are non-venomous. 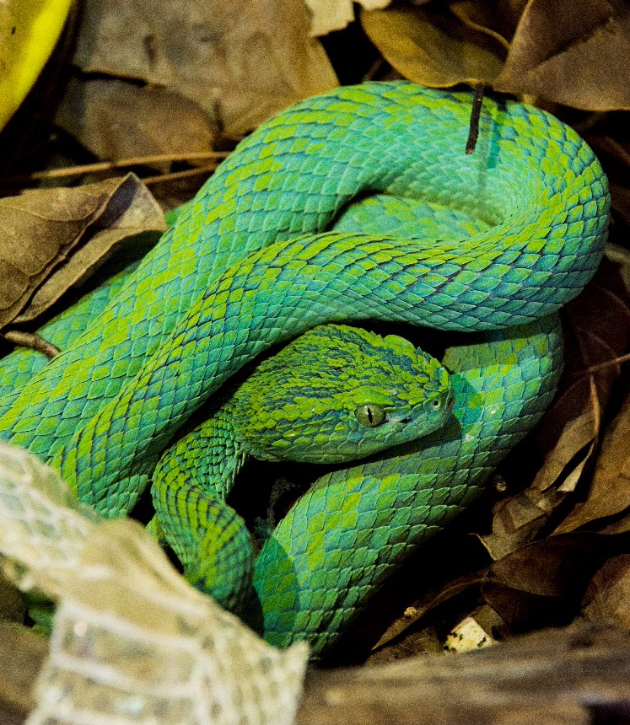 The recently discovered Merendon Pit Viper (Bothriechis thalassinus) is rarely encountered but is known to occur in FUNDAECO’S Sierra Caral Amphibian Reserve, funded with support from WLT. Alarmingly, nearly half of the amphibians in the reserve are currently listed as Critically Endangered by the IUCN Red List. Image credit: WLT/Dan Bradbury.

In Guatemala, WLT partner, FUNDAECO’s 6,000-acre Sierra Caral Amphibian Reserve protects some of the country’s most endangered wildlife. The reserve is particularly important for its globally threatened frogs and salamanders, five found nowhere else in the world. It also harbours the recently discovered Merendon Pit Viper, a stunning blue-toned viper, which is arboreal and found mainly in a palm native to the Sierra Caral. Guatemalan biologist, Carlos Vasquez Almazan, is one of the few individuals to find it in the wild, and he helped draw international scientific attention to the conservation importance of the Sierra Caral. He was awarded the prestigious Whitley Award for Conservation that recognizes outstanding nature conservationists around the world. The Merendon Pit Viper is venomous; bites can be serious, but fatalities are rare.

Tucked away in the eastern corner of Guatemala near the Caribbean Sea, and running along the Honduran border, the Sierra Caral is an isolated mountain range with forests especially diverse due to the convergence of floras and faunas from North and South America, as well as many species unique to the region.

“A nice and gentle rattler” 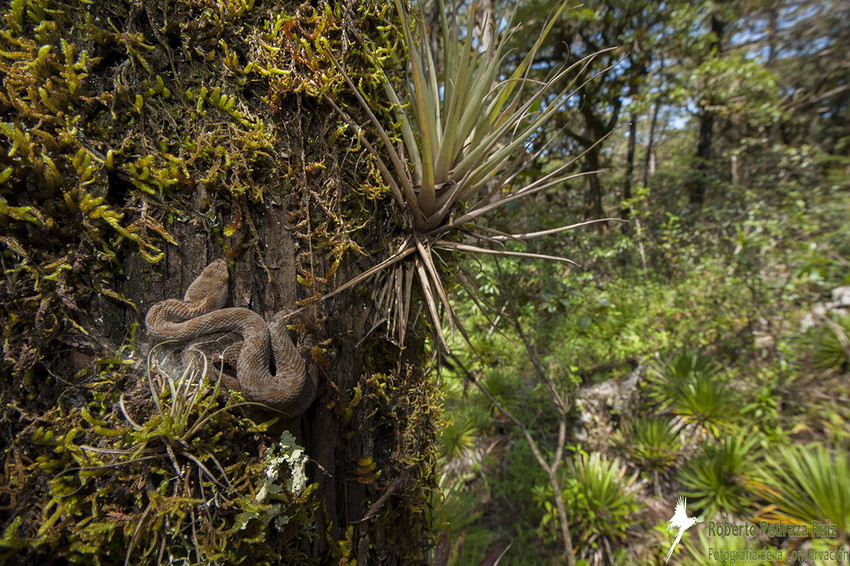 Roberto Pedraza, Technical Officer of WLT’s conservation partner in Mexico, Grupo Ecologico Sierra Gorda (GESG), loves nothing more than to be out in the field. On one trip he encountered this Mexican Dusky Rattlesnake (Crotalus triseriatus) very close to the Cerro Prieto-Cerro La Luz reserve, purchased with help from WLT’s Buy an Acre fund. The reserve consists of the two peaks (Cerro Prieto and Cerro la Luz) with a distance of five kilometres between their highest points. It is a very jagged limestone landscape, with deep sinkholes and ancient oaks growing alongside bromeliads and agave, together with a more usual cloud forest and temperate forest habitat.

“We were being guided by Javier, one of GESG’s rangers, when we stopped at the top of a trail where there was beautiful spring gushing with crystal water, thinking this would be a nice place to have lunch. There we heard a lot of noise up in the canopy – it was a group of coatimundis eating the new leaves and cores of the bromeliads which was an amazing site to see and the first time I witnessed it. Shortly after our lunch we encountered a chunky rattlesnake (I assume he had just had a good lunch too – a rat perhaps?). Nice and gentle as rattlers are, you can’t be too careful so we took a few photos from a safe distance before leaving him to go on his way, unconcerned. It’s so nice to be able to visit these havens, where you can still hear the silence – and be with wildlife enjoying a good lunch.”

Being Kind to Snakes in Paraguay 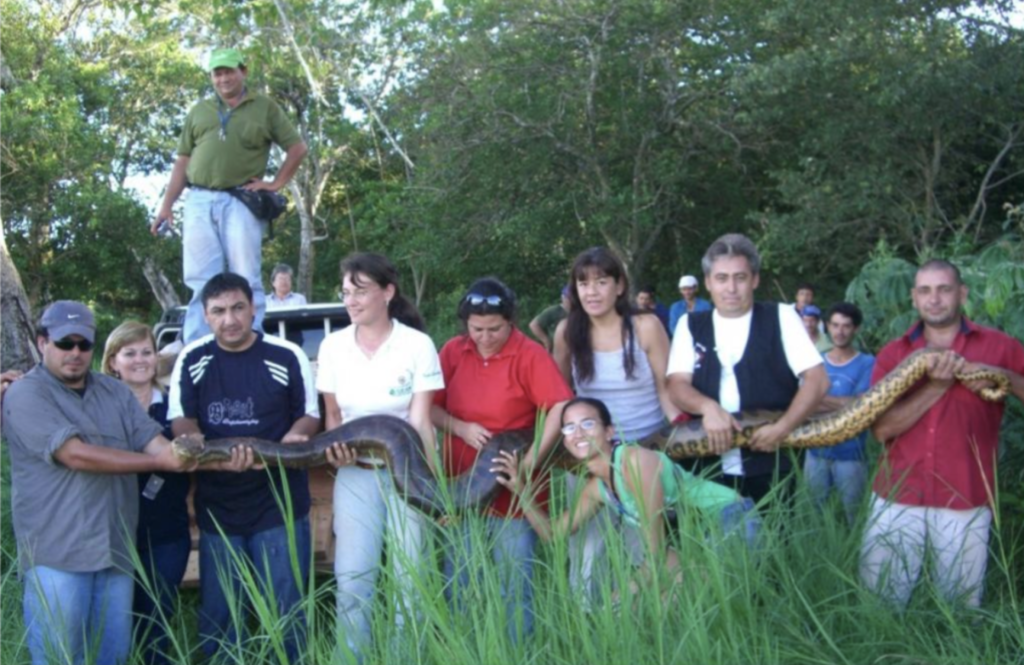 This Green Anaconda (Eunectes murinus) was photographed by Guyra Paraguay’s Hugo del Castillo. It was a good opportunity for people to see for themselves that it was neither aggressive nor slimy, but in fact a magnificent beast. Image credit: Hugo del Castillo.

This Green Anaconda (Eunectes murinus) is one of the giant constrictors of the snake world. As with snakes in general, anacondas in particular are a source of many myths that exaggerate both their size and the danger they present. On the whole they are ‘gentle giants’, that is unless you’re a capybara or a turtle. This anaconda was returned to its river bank home once everyone had had a chance to admire its strength and beauty.

A few facts about snakes

Help us and our partners to protect these wonderful animals and those of many other endangered species across the world by supporting our Action Fund. Your money will help us act quickly, and assist the reserves that need it most urgently.

Donate today to the Action Fund and support projects that are protecting snakes. 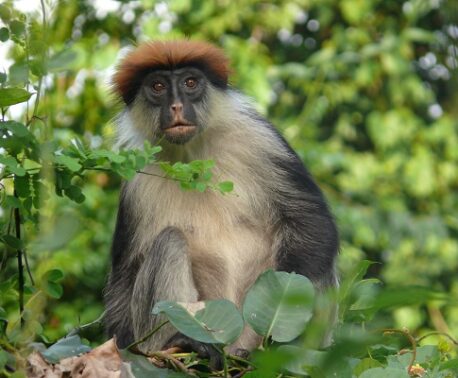 A rich forest teeming with unique and endangered wildlife in Tanzania has finally been placed under protection, supported by World … 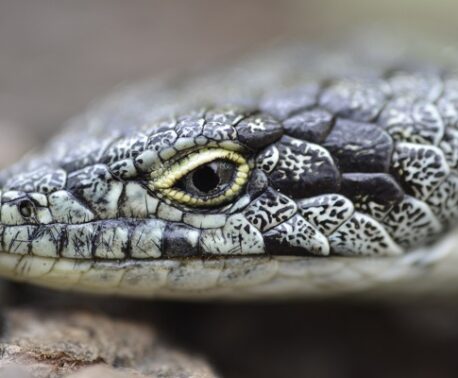 Simon Barnes writes about one of Mexico’s charming tree-bound reptiles in his latest post in his blog series, Barnes’s Bestiary. …