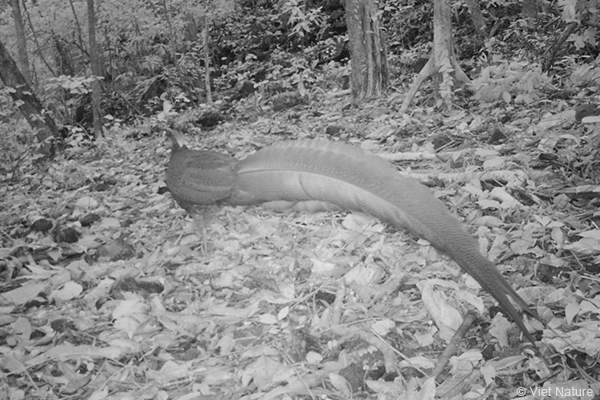 Simon Barnes is perplexed by the elusive but over-the-top Crested Argus.

There are a lot of pretty funky beasts out there, and mostly we are perfectly able to accept them. After all, life’s like that. Nature will come up with some pretty crazy ideas every so often, and that’s fine. And then another one turns up and you say: whoa! Hang on a minute. I’m the first to enjoy a peculiar creature, but this one goes Too Far.

And it’s like that with the Crested Argus. It’s a good idea that’s gone way over the top. If it was on Monty Python, Graham Chapman would come on as the Colonel, announcing that it was Getting Silly. Perhaps we should sum up the Crested Argus as the getting-silly bird.

The males are nicely marked. In fact rather subtle, covered with a thousand cheery speckles, so that they look a little bit like the stars on a frosty night. But the tail – the tail – well, I have to say that’s a bit much. It has that Elton John touch that doesn’t always play well.

It’s the longest tail a bird ever wore: a tail containing just 12 feathers, but feathers of impossible length and width. The tail alone can measure not far off six feet, 1.73 meters, and the bird’s beak-to-tail length can reach nearly eight feet, 2.4 meters.

And why? Because the females like it. Charles Darwin famously said that a peacock’s tail made him feel sick, because he couldn’t explain it by his theory of natural selection. He cracked it in the end, realising that it was about sexual selection. It wasn’t a popular idea, because it’s about female choice and female control. But it’s the right answer.

But out there in the forest of Vietnam, the Crested Arguses, shy and elusive, lives their secret lives – so secret no one really knows how they do it. They are hunted for food and their forests are being destroyed, so they need all the help we can give them. The tails may be silly, but their plight is wholly serious.

You can help expand the forest home of the charismatic Crested Argus by contributing to our Scorched Earth to Forest Haven appeal, which seeks to restore lost tropical forests in areas affected by the herbicide Agent Orange during the war in Vietnam 50 years ago.