A Chacoan Peccary with young, photographed with a trail camera on the ‘El Carmen’ Chaco reserve. Image credit: © Guyra Paraguay

World Environment Day is held on 5 June every year and the theme for 2020 is “Celebrate Biodiversity”. The air we breathe, the water we drink and the food we eat all rely on biodiversity, yet human activities are causing dramatic changes, threatening to upset the web of life. Changes to the climate are reversible, even if it takes centuries, but once species become extinct, particularly those still not known to science, there’s no going back.

World Land Trust’s (WLT) mission is to save threatened habitats and their biodiversity and what better way to celebrate World Environment Day than putting the spotlight on a few endangered species of the Dry Chaco who are successfully reproducing in the wild. By saving habitat, entire communities of animals and plants can be protected together and WLT has been supporting local partner, Guyra Paraguay to safeguard as much of the Dry Chaco as possible.

These trail camera images, were captured by Guyra Paraguay Keepers of the Wild in the Cañada Private Nature Reserve “El Carmen” funded with help from WLT. The arid habitat of the Chaco, with its tough vegetation of spiny shrubs and cacti, and temperatures in the summer rising to 45°C, provides a perfect home for the Chacoan Peccary (Catagonus wagneri). This Endangered species was thought to be extinct until 1971 when it was rediscovered. It range is restricted to the Gran Chaco of Paraguay, Bolivia and Argentina and it is estimated that fewer than 3,000 remain. They feed mainly on cacti, rolling them on the ground to get rid of the spines and they will also pull the spines off with their teeth and spit them out. Their kidneys are specialised to break down acids from the cacti and they have developed other adaptations such as well-developed sinuses to combat dry, dusty conditions and their feet are also small, allowing them to manoeuvre among the spiny vegetations. Females give birth to two or three young, once a year; they are thought to live for around 9 years. The Lowland Tapir (Tapirus terrestris) is the largest native terrestrial mammal of the Neotropics. It is considered a keystone species because of its role as a disperser and predator of tree seeds, playing a critical role in maintaining the ecosystem. Despite having a wide distribution in various South American countries, it is listed as Vulnerable on the IUCN Red List, with a declining population as a result of habitat loss, illegal hunting, and competition with livestock. They have a low reproductive rate with females from two years old giving birth to a single young approximately every 18 months. The harsh and difficult terrain of the Gran Chaco doesn’t come to mind instantly as good habitat for Jaguar (Panthera onca), but in fact they once roamed its original one million km2 expanse. Today, the Chaco is a shadow of its former self, facing ongoing devastation largely as a result of the rapid expansion of cattle ranging. Experts predict that if the current rate of expansion continues in the Chaco, the forest and other native vegetation there could disappear within decades. Thankfully, Guyra Paraguay safeguard some wildlife strongholds in the Chaco and these trail camera images are testament to the survival of the wildlife they aim to protect.

Approximately 184 species of birds, 25 species of mammals and 5 species of reptiles are known from these two reserves but it is pretty certain that new species are waiting to be discovered and named. 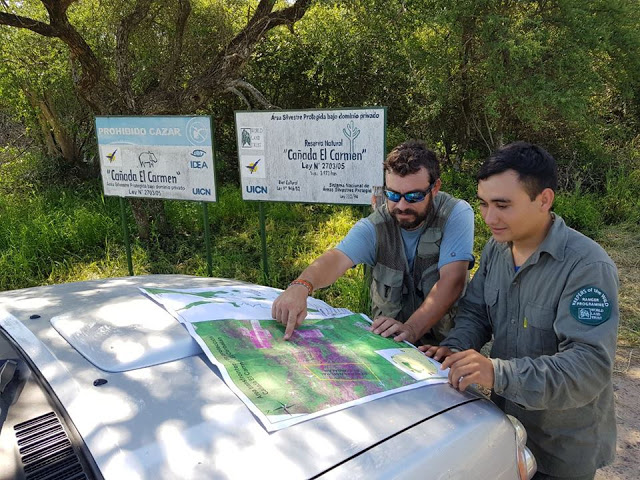 Guyra staff studying the boundary of Cañada del Carmen which covers 9,813 acres (3,973 hectares) in the Dry Chaco. This reserves shares the qualities of Campo Iris, which lies to the north east. An important characteristic of both is seasonal water – a rare commodity in the Dry Chaco.
Without WLT action in partnership with Guyra Paraguay, the properties would have been sold on the open market. Once sold, the land would most likely have been cleared of vegetation and turned into cattle pasture following the common pattern of land use throughout the Chaco.

World Environment Day is the United Nations’ principal vehicle for encouraging worldwide awareness and action for the environment. Held annually since 1974, the Day has also become a vital platform for promoting progress on the environmental dimensions of the Sustainable Development Goals. With the United Nations Environment Programme (UNEP) at the helm, over 150 countries participate each year. Major corporations, non-governmental organizations, communities, governments and celebrities from across the world adopt the World Environment Day brand to champion environmental causes. #GiftThePlanet: Buy an Acre for a loved one to make them a champion of nature this Christmas 27/11/2020

Gift your loved ones a healthier, greener planet this holiday season by buying an acre of protected land on their …

From Extinction Fears to a Safe Home: A New Corridor for the Chacoan Peccary 01/09/2020