Into the Wild: New discoveries and being stalked: Life in the EcoMinga reserves, Ecuador. SEARCH NEWS 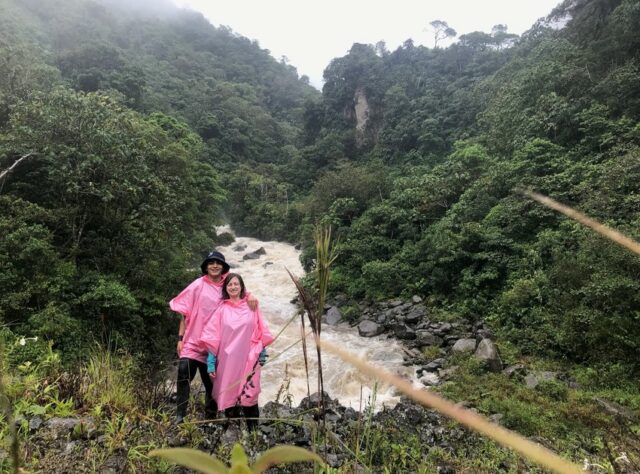 Kelsey Huisman, PhD candidate at the University of Wisconsin-Madison, discovered a whole lot more than she expected when she visited Ecuador to study orchids.

“There is a real sense of wilderness here. The mountains are an escape from civilization, which makes it hard to leave. The only sounds are of nature. It is truly a different world, where the only concern is being in the mountain, being in nature, and surviving.“

Kelsey first visited Ecuador, and met Lou Jost, co-founder and director of EcoMinga, during her undergraduate study. There, Lou said three things that would keep Ecuador at the forefront of her mind when it came to her graduate project; biodiversity hotspot, orchids, and genetics. Kelsey, along with her significant other Eduardo, is now in Ecuador collecting orchids from the unique genus Teagueia. But she is not just there to study these extraordinary plants, she is also there to aid the conservation of the extraordinary region.

Although Kelsey had hopes of seeing a Spectacled Bear, the seclusion and adventure offers a remarkable unpredictability to the region. One morning, Kelsey and Eduardo had heard birds in the distance making a lot of noise – “They sounded scared, like they were giving a warning.” Later, as they neared the first cluster of Teagueia orchids to collect, they discovered the remains of feathers in the trail. As they ascended Cerro Mayordomo from the second camp, they found a large, fresh puma print in the mud. Continuing to ascend the trail, Kelsey lowered herself to the second cluster of orchid.

“Eduardo whispered for me to listen. A couple of branches snapped under the weight of an animal in the distance, seemingly parallel with us but about 10m away. All that morning, I had felt like we were being watched, but now it was certain. As we continued up the already dangerous trail, we came to the site of the crashed airplane. As always, we paused in awe of Pachamama and then, in the distance, we could hear branches breaking. The Puma. It was now behind us. Unfortunately, but more fortunately, we did not see it.” 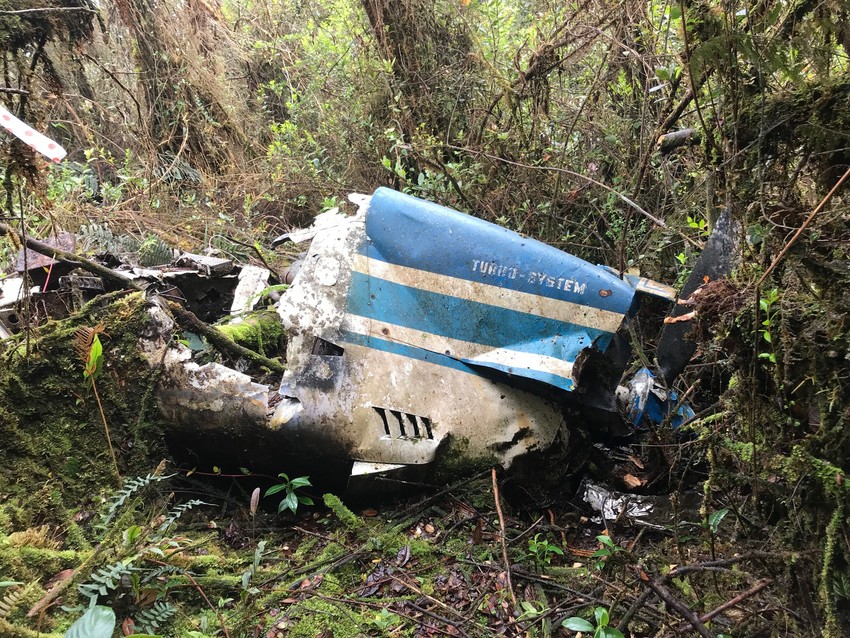 Whilst collecting leaf samples, Juan Pablo Reyes Puig, Reserve Manager of EcoMinga, asked Kelsey to also collect frogs and toads from the mountains. “Eduardo and I were not actively looking for a new species,” said Kelsey, “but there is always that hope, since we are working in these remote, largely untouched habitats, though these reserves are continuously explored by Lou, the EcoMinga staff, and other visiting scientists and students.” As one of EcoMinga’s most explored reserves, their discovery at Cerro Candelaria of O. backshallii, named after World Land Trust (WLT) patron Steve Backshall, is even more extraordinary. 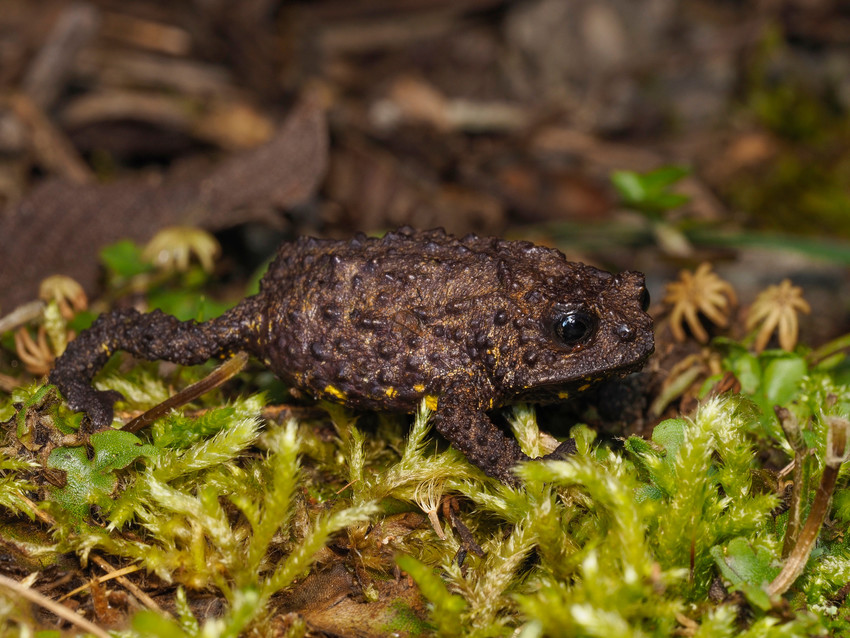 “The day we discovered Backshall’s Toad, Eduardo and I were hiking out of Cerro Candelaria after many consecutive days of heavy rain, rendering the mountain extremely dangerous and making the collection of Teaguiea samples impossible. As we tried our best to hike quickly, Eduardo, who was walking ahead of me, spotted the toad just hanging out on a moss-covered log in the middle of the trail around midday or early afternoon.We were trying to get out of the mountain as fast as possible. Earlier as we descended the steep trail of smooth, heavy mud in the pouring rain, there was a sound of thunder in the distance, but as the sound continued the ground and trees began moving slightly. We looked at each other with a sense of panic and terror, our hearts pounding, thinking that at any moment a landslide was going to swallow is completely. Landslides are a real danger. People and animals getting swallowed up by the mountains here is not an uncommon story.”

When they returned to Baños de Agua Santa, the pair presented the toad to Juan Pablo, who is a herpetologist. “Juan Pablo was very excited yelling, “Kelsey! Kelsey! Kelsey! Edu! Edu! Edu!” while pumping his fist in the air,” remembers Kelsey, “It was mine and Eduardo’s first new species, and finding a species new to science is no small feat.”

THE ADVENTURE OF RIO ZUNAC

As they hiked out of the reserve on the last day, they stopped at a large tree where an EcoMinga sign rested on the ground. “Eduardo lifted the sign out of curiorsity,” said Kelsey, “then jumped back! He lifted it again and there was a beautiful false coral snake resting under its warmth.” This should not have been a surprise, Rio Zuñac had already offered Kelsey and Eduardo many surprises. “I saw my first Cock-of-the-Rock bird, which filled my stomach with butterflies. And on the second day at the cabin, there was a large group of monkeys not far up the trail from us,” she said. 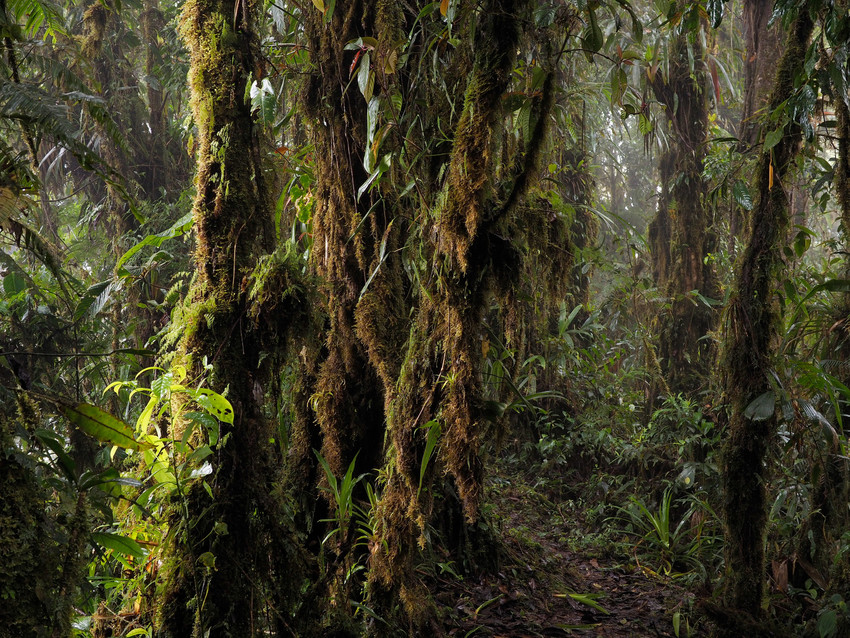 “My favourite part about being in the reserves is the seclusion and adventure. To hike in the mountains is incredibly difficult and intense, most of the time leaving me out of breath, soaked in sweat, and covered in mud. I am hiking in the Llanganates, known to be the most mysterious and dangerous in Ecuador. The Rio Zuñac reserve is far different from the other mountains where I have worked. It is the final cordillera of the Andes, bordering the Amazon Basin. There is a very different flora and fauna compared to the other mountains, and the weather patterns are unpredictable, yet still vary from mountain to mountain. To be in the reserves, for me, I feel like I am home. There is something very special about this region that seeps into your core.”

Jonathan Barnard, WLT CEO, surprised Steve Backshall at One Wild Night, in aid of Rio Zuñac at One Wild Night 2019. The event kickstarted a new campaign to raise funds to expand the reserve, where a range of mammals and eastern Andean birds can be found, along with a vast wealth of amphibian species. Just like Kelsey’s discovery, species new to science are regularly discovered in the area. Purchasing this area will not just provide protection for its rich habitat, the purchase will also play a positive role in the fight against climate change as it will help to absorb and lock in carbon within the forest for years to come. We’re so close to reaching our fundraising target to help EcoMinga – help us get there by donating today!