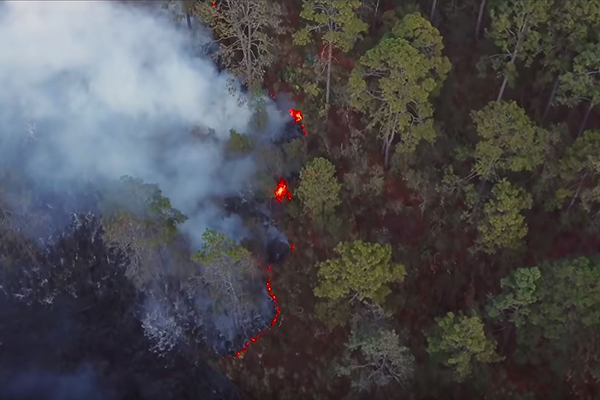 Our Patron Steve Backshall has recorded this video message for those concerned about the fires in the Amazon rainforest:

Steve’s message highlights the reality of the situation: although catastrophic, the fires are part of a bigger, wider issue, affecting highly threatened forest habitats beyond the Amazon Basin – including those in reserves managed by WLT partners.

A contribution to WLT’s action fund ensures that your donation will go where it is needed most, to tackle the most pressing issues facing our partners around the world.

Why is the Amazon on fire?

According to Brazil’s environment minister, the fires have been caused by a combination of scant rainfall, high heat, intense wind and lightning strikes. However, while it’s true that wildfires often occur in tropical forests during the dry season, the vast majority of fires in the Amazon this year appear to be caused by human activity – clear-felling the forest and then burning it to free up land for cattle ranching and soybean farming.

There are allegations that the crisis has been exacerbated by years of government cuts to Brazil’s environmental agency, IBAMA, which is responsible for clamping down on illegal logging in the Amazon. This continued in April 2019 when the agency’s budget was reduced by 24%. In July, satellite data from the Brazilian space agency, INPE, revealed a significant increase in deforestation compared to the same period in 2018. Oilseeds are Brazil’s top export (outperforming oil, minerals and meat), bolstering the strength of the country’s agricultural sector and adding pressure to clear more forest for soybean cultivation.

Why isn’t World Land Trust buying land in the Amazon?

Much of the Amazon is not for sale, and political and economic interests are standing in the way of conservation. It is likely that even if funds could be raised it would not be possible, at the moment, to carry out land purchase and reforestation.

However, we share your concerns about the Amazon and as an organisation World Land Trust (WLT) does everything it can to ensure the safety of the reserves it has created and works with local conservation organisations to manage and protect the land. Fires have extended much further than the Amazon and large areas of forest have been damaged in our projects in Bolivia and Paraguay. WLT’s priority is to save these critically threatened forests and we will be supporting partners in these countries as needed once the situation is clear. You can help by donating to our Action Fund.

Recently, we helped our partner Jocotoco purchase land in the Amazonian Andes of Ecuador and have also raised funds to purchase land and plant trees in Nangaritza – another Andes/Amazon transition area in Ecuador. Our Keepers of the Wild programme, meanwhile, funds rangers who, earlier this year, helped monitor and control wildfires in Mexico and Belize.

What can we do to stop the Amazon burning?

The most urgent priority is for the governments of Brazil, Bolivia and Paraguay to use international aid for controlling the fires and ensure they are not allowed to burn unchecked. We also need to support local conservation organisations, including the many NGOs we work with in South America. As increasingly higher temperatures are recorded and dry seasons last longer, WLT sees it as important to support our partners on fire management and training in partnership with local land owners. Our Action Fund directs money to the most urgent conservation priorities, while a donation to our Keepers of the Wild programme puts boots on the ground, funding rangers to patrol our reserves, monitoring wildfire risks and coordinating a quick and effective response when needed.

BirdLife International’s manifesto – supported by several of our partner NGOs in South America – urges the governments of Brazil, Bolivia, Paraguay and Argentina to ‘review their current policies that incentivize deforestation and unsustainable productive practices’.

The effect of 2019’s forest fires in the Amazon is likely to significantly contribute to the climate change crisis. The issue of saving the Amazon is, therefore, a longer-term problem which requires committed, long-term action on a global scale. For the immediate future of the Amazon, look to charities that are working directly in the Amazon Basin. Many have created emergency funds, or are redirecting donations, to deal with the crisis now.

However, for ongoing solutions, the biggest impact that individuals can make is to use their voice, their consumer power, and direct their charitable giving to charities that are protecting habitats. Reducing meat consumption, or opting to only eat locally produced meat and other products, checking the provenance of other purchases, and limiting your reliance on fossil fuels, for example switching to green energy suppliers, will all contribute to a shake-up of the way governments and industry are currently using Earth’s resources.

Why are forest fires getting worse?

Although forest fires are not a new phenomenon, statistics clearly show that their frequency, and often intensity, is increasing year on year. Whether a result of natural causes, such as lightning, or human action (both accidental or intentional), there is little effect on the overall scale of the fire. Quite simply, forest fires are getting worse because of climate change and deforestation – the latter exacerbated by our growing demand for cattle grazing and oilseed production.

But the Amazon Rainforest is not the only place on Earth that has seen unprecedented increases in wildfires this year; this is a global issue that has even seen Siberia and the Arctic aflame. Due to significant rises in greenhouse gases caused by human activity, the global temperature is increasing. One effect of this is for land to become drier as moisture is drawn into the atmosphere, and as land is also getting drier for longer periods due to earlier snow melts, fires can rage with increased ease. When you combine more arid conditions with increased temperatures, the severity of forest fires inevitably surges.

What is the environmental impact of Forest Fires?

Forest fires pose a great threat to wildlife and biodiversity. While some ecosystems require fire to maintain their health, the acceleration we are witnessing will have devastating consequences.

Overall, their effect is contributing to climate change, which continues to affect biodiversity on a global scale. When it comes to the effects on specific habitats, it’s very clear: forest fires destroy plants and wildlife, many of which cannot recover. For any wildlife that does survive, they lose their vital protection and access to food, which in turn leads to more losses.

Humans have already altered climate patterns by increasing greenhouse gas emissions. Forest fires contribute to this as the forests turn from carbon sinks into a rapid source of carbon emissions. Trees and soil store CO2, so naturally when they burn it is released. These habitats are vital to the survival of wildlife and people and their loss exacerbates the climate crisis, not only as they are no longer there to perform their role of drawing CO2 from the atmosphere, but because the sudden release of large amounts of CO2 can cause other extreme changes to climate. Furthermore, forest fires leave landscapes vulnerable to other threats such as flooding and erosion, which creates even more long-term climate issues.

Will £10 million from the UK Government make a difference to stopping the Amazon fires?

Even if the Brazilian government accepts overseas aid to help tackle the fires, £10 million falls woefully short of what’s needed, in practical terms, to control the blazes. The scale and intensity of the crisis requires an international response on a far greater scale. WLT founder and chief executive John Burton, says “I was horrified when I read that the UK government had pledged £10 million to help save the Amazon. It probably would not even buy a single estancia. This is only twice the budget of WLT this year, and while governments think in such a miniscule scale, the rainforests will continue to disappear at an alarming rate.” Read the rest of John’s blog about what needs to be done to save the Amazon and the world’s other threatened forests.