The Jeweled Chameleon is a medium-sized chameleon, reaching up to 140 mm in length with females being slightly larger. They have a dorsal crest of small projecting granules, and are brightly coloured, with a pale to dark green or brown background colour when relaxed, turning black when alarmed, and buff to pale blue spots and three pale yellowish stripes running along each side of the body.

They get their common name from the lines of reddish spots on the top of the head. Sexual maturity is reached at three months old.

Jeweled Chameleons are diurnal, solitary and mainly arboreal, spending most of their time foraging in shrubs and occasionally in trees, aided by their prehensile tail, as well as in grassland between rocks. They are omnivores, feeding mainly on invertebrates that they catch by waiting in ambush and grabbing when in range using their long sticky tongue.

Breeding occurs during the warm rainy season from November to April. This species is an oviparous chameleon. Females lay their eggs in a hole excavated in the soil, and the incubation period is 140-265 days. They lay up to three clutches each year. Much of the information about their reproduction comes from animals in captivity, where each clutch contains 8-12 eggs, and the hatchlings take three months to reach sexual maturity. Lifespan in the wild is thought to be four to five years.

Like other chameleons, the Jeweled Chameleon is an ectotherm, relying on energy from their environment to regulate their body temperature. When basking in the sun, they can increase the melanin in their skin to become darker and accelerate warming. They also change skin colour when defending a territory or attracting a mate. 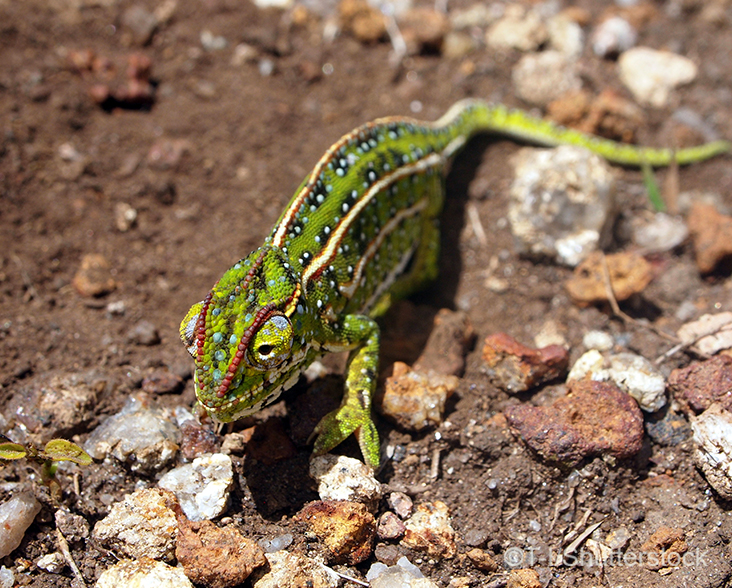 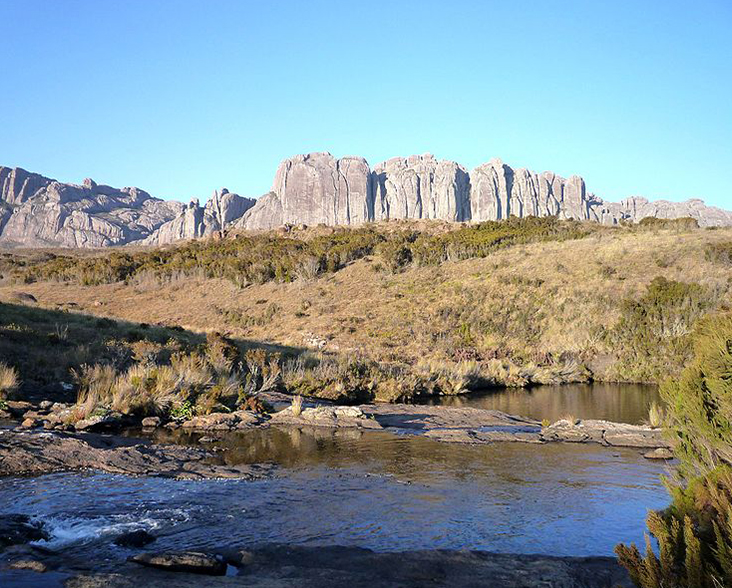 The Jeweled Chameleon is endemic to the central highlands of Madagascar, from Ankaratra in the north to Parc National d’Andringitra in the south. They inhabit montane grassy savanna and heathland at elevations from 1,793 to 2,643 m above sea level.

Although sometimes locally abundant, there is a lack of quantitative data on the population. This species is categorised as Vulnerable on the IUCN Red List due to its restricted range and severely fragmented and declining population resulting from destruction and degradation of their montane heathland habitat by slash-and-burn agriculture. Illegal collection for the international pet trade continues to be a threat despite collection from Madagascar currently prohibited by CITES, and this species is also potentially at risk from future up-slope displacement caused by climate change.

Management of fires on their heathland habitat is a priority. This species occurs in one protected area, Parc National d’Andringitra, but much of their range, including the Ankaratra massif, is not yet protected.