Tamanduas have the same long, tubular snouts and long, sticky tongues of the other species in the anteater family, but are only 47-77cm in length (without the tail) with considerably shorter hair than the Giant Anteater. The Northern Tamandua appears to be wearing a bold black vest over their beige fur forming a distinct ‘V’ going down the spine, which has assigned them an alternative name of vested anteater. The Southern Tamandua, its closest relative, has more variation in their colouration across their range, but some specimens from the south-eastern populations of their range look so similar to the Northern Tamandua that they can only be distinguished by skull characteristics.

The Tamandua has dense, wiry fur which is thought to keep attacking ants at bay when feasting at an anthill. On each front paw are four mean claws that range from 4 to 10 centimetres in length. These long weapons are used for defence and breaking open termite and ant nests, into which the tamandua then inserts its slender tongue swathed in sticky saliva to draw out ants and termites.

It also has a strong, prehensile tail which it wraps around trunks and branches whilst climbing or as an extra limb to anchor it standing upright on its hind legs.

The Northern Tamandua eats both ants and termites but ants make up one-third of its diet, eating around 9,000 ants per day. These ants are located by scent, and then their nests are broken into by the tamandua’s large claws and front paws. It will visit 50-80 different ant and termite colonies every day, causing only small amounts of damage and only feeding for less than a minute at each nest due to the social insects’ aggressive defence.

Northern tamanduas are solitary with home ranges that may overlap with other individuals. Courtship involves mutual inspection, following each other and “boxing”. The gestation period is between 130 and 150 days. The Northern Tamandua usually gives birth to a single young that remains with its mother for about a year. The mother will take her young with her whilst foraging, the young clutching her back or flanks, and leave them on a tree branch whilst foraging.

Tamanduas have a good sense of smell which they use to locate their prey, but are also known for having a strong skunk-like scent, which may serve as a deterrent to predators such as jaguars and other cats. 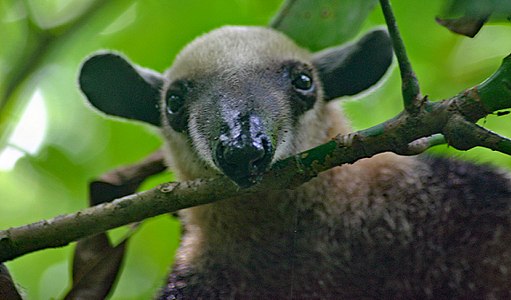 The Northern Tamandua is found many in types of forest, both tropical and subtropical, deciduous and evergreen. It will also live in mangroves and grassland with some trees and is fairly adaptable, surviving in disturbed habitats and secondary forests.

Its range extends from Mexico in the north, down as far as the northern part of Peru.

However, its primary habitat is still under threat so it is protected by national laws in Mexico and Guatemala and considered vulnerable in Peru. More studies need to be conducted to analyse the effects of its four main threats: road traffic, wildfires, hunting and habitat change.

It is considered uncommon in Ecuador, which may be due to local persecution as it is believed to attack domestic dogs.