The Mountain or Eastern Bongo is one of two subspecies of the Bongo (Tragelaphus eurycerus).

This subspecies is the largest and heaviest African forest-dwelling antelope, reaching 128 cm high at the shoulder, with males weighing up to 405 kg and females up to 253 kg.

They have a chestnut to reddish-brown coat that darkens with age in males, black and white markings on the head, lower neck, belly, and legs, and 12-14 striking narrow vertical white stripes on the shoulders, flanks, and hindquarters providing excellent camouflage in their forest habitat. Both males and females have long spiralled horns, averaging 75 cm in length but can reach 99 cm. They can live up to 20 years.

The Mountain Bongo is nocturnal and mostly active at dawn and dusk. Bulls are largely solitary, only socialising during mating, while females with calves can form small herds of up to 10.

Females give birth to a single calf around nine months after mating. They conceal their calf in vegetation to protect them from predators, returning regularly to suckle, and calves are weaned at around six months old.

Mountain Bongos are herbivorous and mainly browsers, although they will also graze. Their diet includes a variety of herbs, creepers, shrubs, bamboo, bark, and the roots of saplings that they dig up using their horns. They also visit mineral licks for salt and have been known to eat burnt wood to obtain minerals. 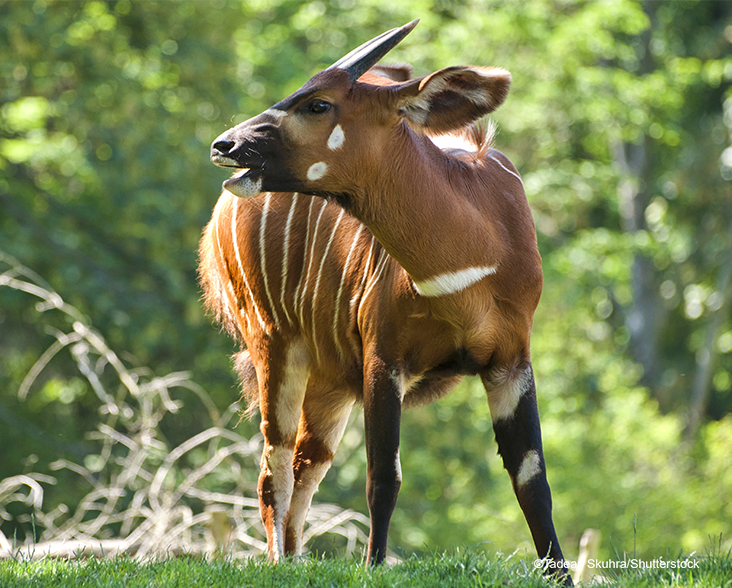 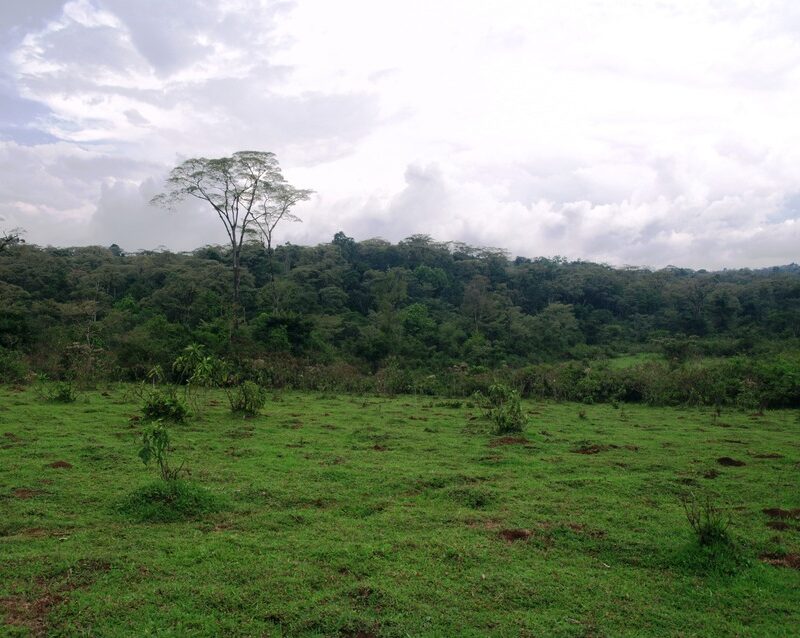 The Mountain Bongo inhabits subtropical and tropical moist montane forest up to 4,300 metres above sea level.

Now restricted to four isolated populations in forests at Mt. Kenya, the Mau Forest, Eburu Forest, and the Aberdares Mountains, this subspecies formerly occurred in the Cherengani hills and the Chepalungu hills in Kenya, as well as on both the Kenyan and Ugandan sides of Mount Elgon but became extinct in Uganda around 1913-1914.

The Bongo species is categorised as Near Threatened on the IUCN Red List, with an estimated population of 15,000-25,000 mature individuals and declining. However, the Mountain Bongo population has undergone a dramatic decline, with the remaining population estimated at just 100 individuals, comprising less than 50 in the Aberdare Mountains, 10-15 at Mt Kenya, about 10 in the Eburu Forest, 20+ in the Maasai Mau Forest Complex, and less than 10 in the SW Mau Forest. Therefore, this subspecies is listed as Critically Endangered by the IUCN SSC Antelope Specialist Group.

The Mountain Bongo population suffered huge declines from the disease Rinderpest during the 1890s and early 1900s. Diseases transmitted by cattle remain a major threat, along with habitat loss due to illegal logging and heavy grazing, increased hunting by local people, and predation by introduced Lions Panthera leo in the Aberdares Mountains.

The survival of the Mountain Bongo hinges on more effective protection of the surviving isolated populations, along with monitoring and conservation of their habitat. There are currently more Mountain Bongo in captivity than in the wild, and wild populations are being boosted by the reintroduction of captive-bred animals on Mt. Kenya.