The Bezoar Goat belongs to the sub-family Caprinae, sometimes described as the ‘goat antelope’ family. It contains a wide range of species that live in a variety of extreme environments, from deserts to alpine plateaus.

The Bezoar or Wild Goat is one of the main ancestors of the modern domestic goat. Like other goat antelopes, Bezoar Goats are stocky, gregarious bovids. Gregarious animals tend to form groups or loosely formed communities with others of the same species.

Male Bezoar Goats (billies) have a head-body length of 129-152 centimetres and can weigh up to 90 kilograms, while females (nannies) are smaller, weighing up to 55 kilograms.

Coat colours vary depending on the region and season. In the winter, adult males have a pale, ashy coat. This contrasts with their dark beard and chest, and with dark stripes along their spine, across their shoulders and front legs, and along their flanks.

Both males and females of this species have horns. Females’ horns are rarely longer than 33cm, whereas adult male’s horns are far more striking. At up to 127 centimetres long, they curve upwards and backwards from the head in an arc shape.

The breeding season varies across the Bezoar Goat’s range but is generally from November to January. During this time, males stay with female herds instead of wandering from herd to herd looking for females. Kids (baby goats) are born after a 150-160 day pregnancy, and twins are very common.

Bezoar goats are mainly active during daylight hours and in warm weather they feed both in the early morning and in the late afternoon. They are herbivorous, feeding on grasses, herbaceous plants and shrubs. 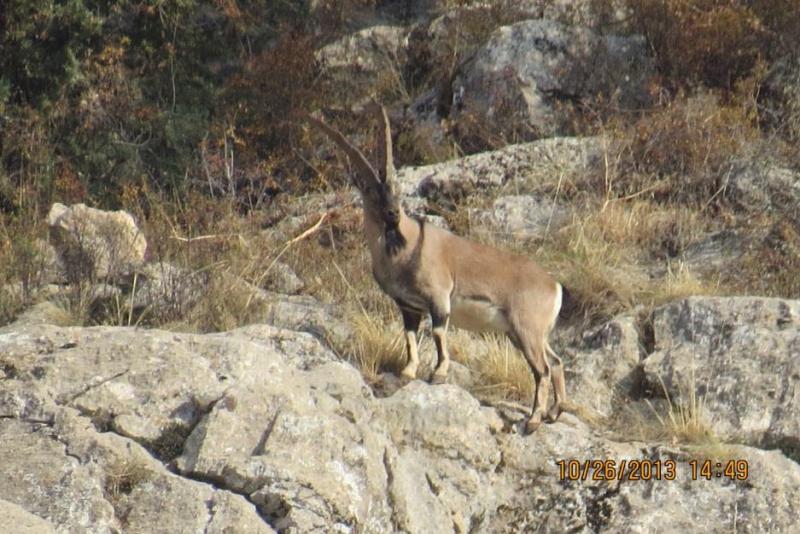 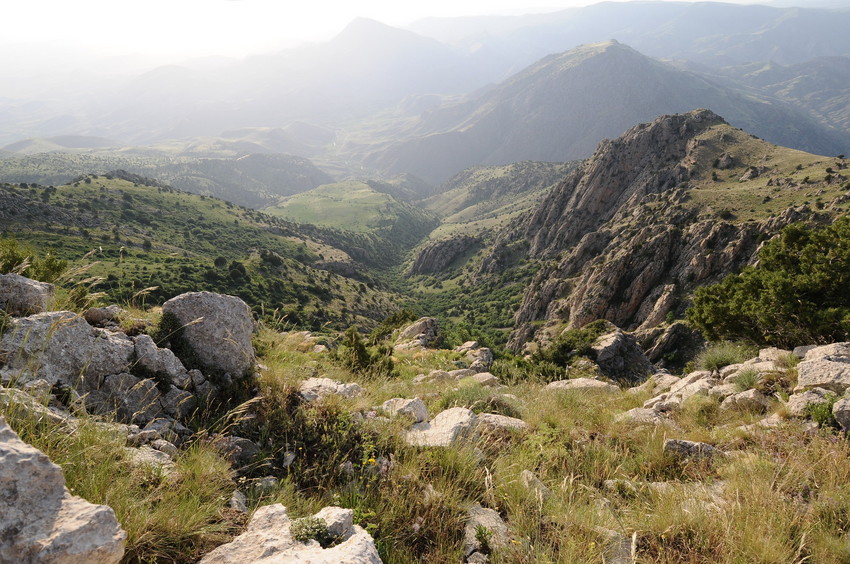 Bezoar Goats live across several different countries in Eastern Europe, the Middle East and Asia. They inhabit mountainous areas at heights of up to 4,000 metres above sea level, and like a mix of rocky outcrops and shrubby vegetation or coniferous forest. In the Caucasus region, which includes countries such as Armenia, they also occur in more open, arid habitats.

There are no estimates for the global population of Bezoar Goat, although it is thought to be very rare in much of its mapped range. Bezoar Goats are known to be locally extinct in several countries including Jordan and Syria. In the Caucasus region, estimates of the population were between 3,500-4,000 individuals in the late 1980s but it has declined rapidly since then, largely as a result of illegal hunting.

The Bezoar Goat faces a variety of threats across their range. These include habitat loss, from logging and land clearing, as well as competition from livestock. They are legally hunted in some areas, and threatened by illegal hunting in others. Their large horns make popular trophies for game hunters.

Road construction can divide and isolate populations, and the ongoing tensions between Armenia and Azerbaijan have affected the population of Bezoar Goat in that region.

Bezoar Goats are thriving in the Caucasus Wildlife Refuge in Armenia. Here, there is natural vegetation and strong protection to keep the goats safe from hunters. The Foundation for the Preservation of Wildlife and Cultural Assets (FPWC) manages the wildlife refuge and a team of rangers, with support from World Land Trust.