The Southern Banded Snake-Eagle is an uncommon raptor, found only along a narrow strip of the east coast of southern Africa. A small snake-eagle with a big-headed appearance, they reach 54-60 cm in length and have a wingspan ranging from 119-128 cm.

Adults are white on the underparts with a plain greyish-brown breast and brownish barring on the belly, flanks, and thighs, a greyish face, pale yellow iris, and yellow legs and cere. Their upper parts are dark brown, and in flight they show black-tipped barred flight feathers. The three white bands on the relatively long blackish tail help distinguish them from the much more common and widespread Western Banded Snake-Eagle (Circaetus cinerascens), which has just a single pale band on a shorter tail, and also has less barring on the underparts.

The juveniles differ by having white underparts with buff barring, dark brown upperparts, and a pale buff to white head with dark brown streaks.

The Southern-banded Snake-Eagle is a solitary, secretive but also rather noisy raptor, frequently giving a fast high-pitched “ko-ko-ko-ko-kaw” call, either while perched or in flight.

A forest-dwelling species, they typically hunt by perching unobtrusively within the forest canopy, but have also taken to perching on electrical, telephone and railway pylons on cultivated land and grassland adjacent to forest in the early morning, retreating into the forest as the temperature increases. They catch mainly snakes which are swallowed whole and head-first if small enough, as well as lizards and also – occasionally – rodents, amphibians, small birds, and arthropods.

Breeding takes place between July-October in East Africa and September-October in southern Africa. Southern-banded Snake-Eagles are territorial, each breeding territory covering between 2 and 3 km2 and proclaimed with aerial displays that involve flying up and down while calling loudly, and occasionally finishing with a steep dive.

Before laying just a single egg, both parents build the small stick nest on a fork 8-13 m high in the canopy of a forest tree, lining it up with green leaves to ensure it stays well hidden among creeping plants. 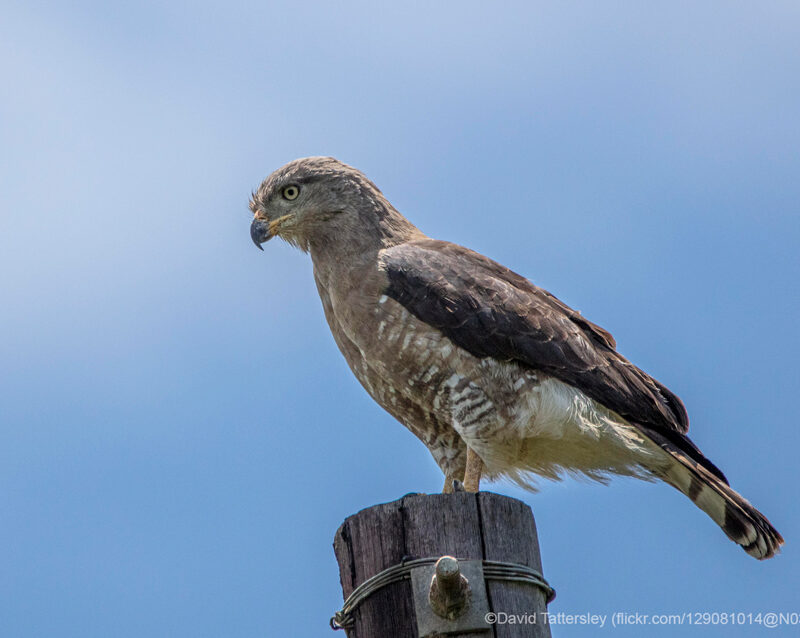 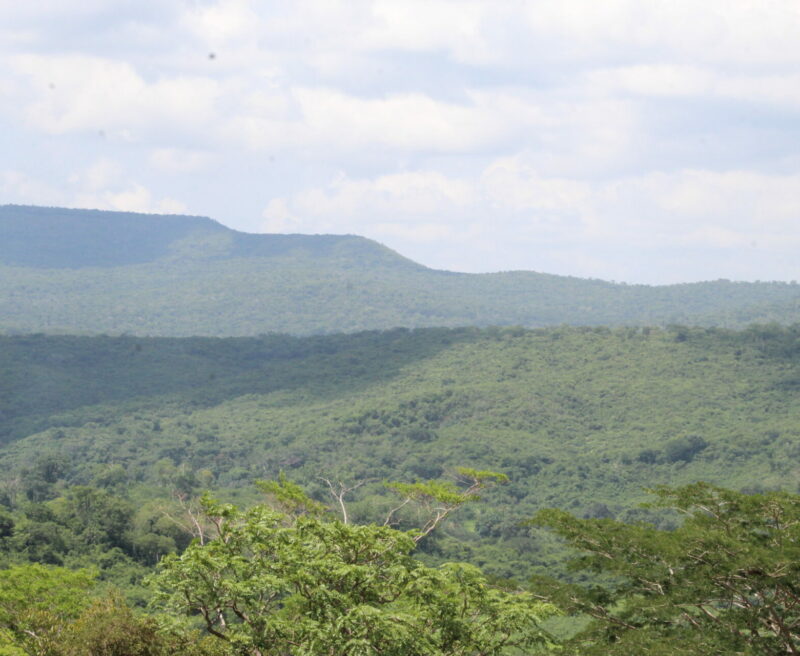 The Southern-banded Snake-Eagle has a restricted range, found mainly within 20 km of the coast from southern Somalia, through Kenya, Tanzania, and Mozambique, into north-eastern South Africa,

The species favours dense coastal and riverine forest ranging from sea-level to 1500 m, but can also be found on adjacent marshes and floodplains. They are mostly resident, but with some movement northwards into Kenya during the dry season from May to September.

With a global population estimated at 1,000–3,000 individuals and decreasing, the Southern-banded Snake-Eagle is listed as Near Threatened by the IUCN. In South Africa, where only 50 individuals remain, they are listed as Critically Endangered.

Numbers of this shy species are expected to continue to decline, and habitat loss is the chief culprit. The coastal forests they favour are threatened with deforestation, degradation, and fragmentation due to extraction of wood for timber, charcoal, poles, and firewood, as well as from slash-and-burn agriculture.

Conservation efforts include surveys to monitor the population as well as rates of deforestation and degradation, and also to increase the area of protected habitat within their range. In Tanzania and starting in 2021, WLT is supporting a project by partner TFCG to save coastal forests that are a confirmed home for the Southern Banded Snake-Eagle.