The Sarus Crane is the tallest flying bird in the world averaging 156cm in length, with a wingspan of up to 240cm and an average weight of 6.35kg, although females are smaller than males. The adult birds have light grey plumage covering their bodies and black-tipped wings. Their head and neck are covered with naked red skin, with a white crown and long black bill. They also have long red legs and a patch of grey feathers covering the ears. The juvenile birds have a similar build but appear duller and browner.

Sarus Crane are a social species that exist in varying size flocks depending on the size of the wetland. Within the flock there will be sub-groups of 2-4 birds, which live together. However, during nesting season they can become territorial and aggressive. The cranes are monogamous birds that breed during the rainy season from June to September. The mating procedure involves dancing, bowing and loud trumpeting sounds. Females  lay 2-3 eggs, which are incubated by both sexes for 31-34 days. The chicks then fledge from the age of 85-100 days.

Despite being skilled flyers, Sarus Crane do not migrate and instead use wetland vegetation to build large nests on the ground. They consume a varied omnivorous diet of aquatic plants, grains, invertebrates, crustaceans, and insects, using their long bills to probe the underwater mud layer. 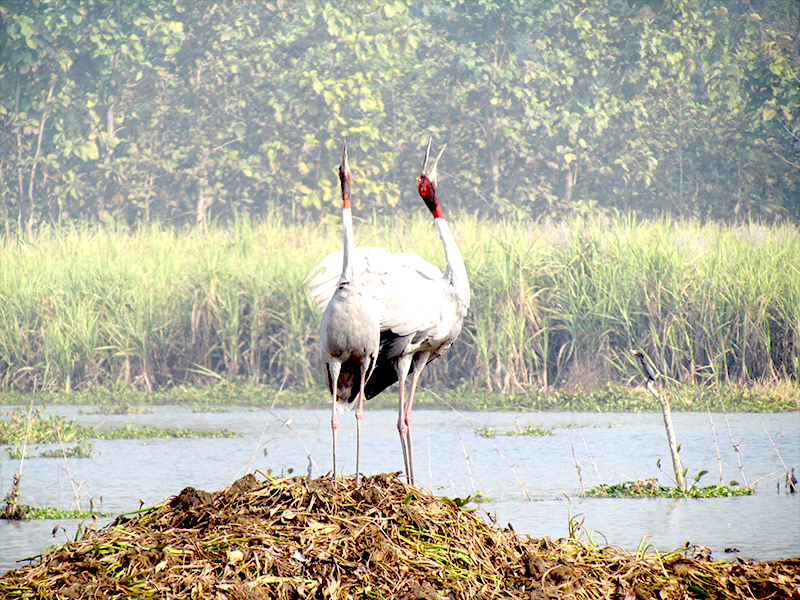 The crane’s main habitat is freshwater wetlands including marshes and ponds, sometimes at high altitudes. As a wading bird species, they are always found near a source of water and sometimes resort to living on cultivated land such as rice field during the dry season, or if their wetland habitat has been degraded.

The Sarus Crane population is currently decreasing due to several factors including human interference. Water diversions and wetland drainage for agriculture have led to habitat loss and land degradation. An increase in construction and changes to farming practices, including the use of pesticides, are also major threats; the destruction of their wetland habitat forces the birds to feed on crops, where they ingest pesticides. Sarus Crane chicks and eggs are also hunted for trade, food and medicine.

Current conservation efforts include wetland habitat protection schemes across southern Asia. There are also research, monitoring and education schemes in place, and the species is included in international legislation regarding its management and trade.