The Burrowing Parrot or Burrowing Parakeet lives in Chile and Argentina. Most of its feathers are golden-green but it has a distinctive yellow front and underparts as well as displaying a bright orange patch of feathers at the top of its legs. It forms the largest breeding colonies of all parrot species.

These parrots live in very large groups and nest closely to one another. They feed on seeds taken from the ground and on vegetation during the winter. They also eat berries and fruits from several plant species

Like many parrots they are conspicuous and noisy, as well as being very gregarious. They sleep in communal roosts in trees, wires or in their nesting burrows where they gather in large flocks. Before sunrise, they call and flutter around the roost, leaving in a flock at first light. The flock flies high in long irregular formation.

By day, the birds fly low above the ground, pausing briefly on low branches. They forage on the ground where their olive-brown plumage provides them with good camouflage. 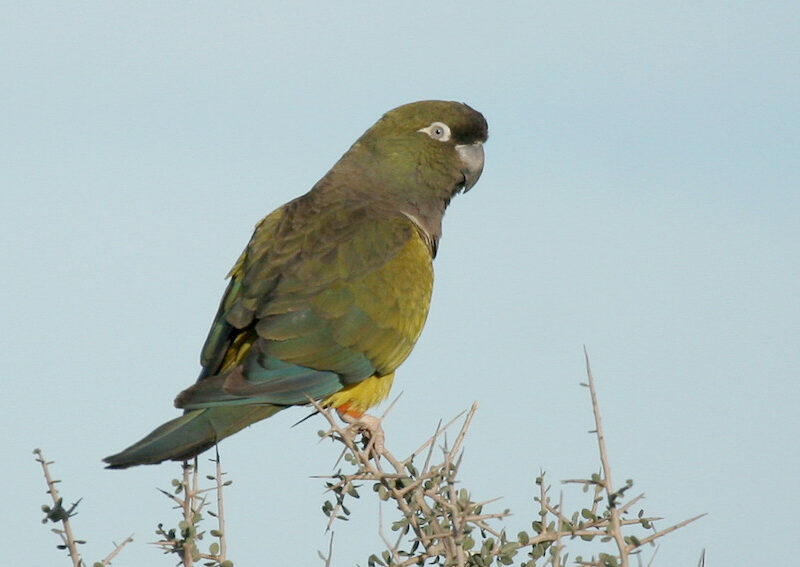 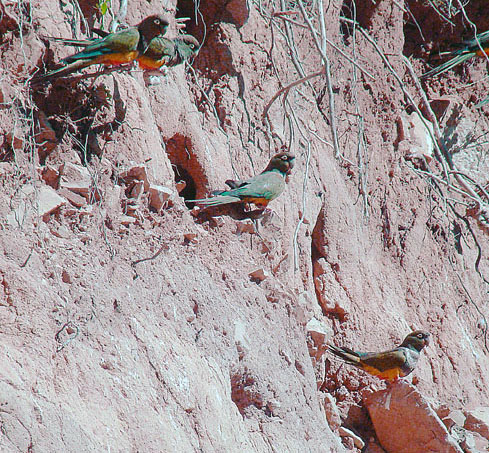 Generally the Burrowing Parrot lives in open grassland, while it creates nesting burrows in sandstone or limestone cliffs.

Formerly common and widespread in Argentina,  these birds are now only locally common, and in some areas are extinct.

Part of the problem is that the Burrowing Parrot is very easily disturbed and habitat specific. They will only tunnel into vertical limestone or sandstone cliffs to make their nests, and have specific height requirements.

In areas where they are still locally abundant, they are often considered an agricultural pest and persecuted as a result.

Loss of their grassland habitats to arable crop production is causing significant decline as is trapping for the live bird trade.

Another increasing threat is the development of unsympathetic tourism. In cases where four-wheeled vehicles are allowed on beaches, chicks can easily be killed. The expanding holiday resort of El Cóndor is a serious threat to a breeding colony of Burrowing Parrots in the cliffs at the Rio Negro in Patagonia.