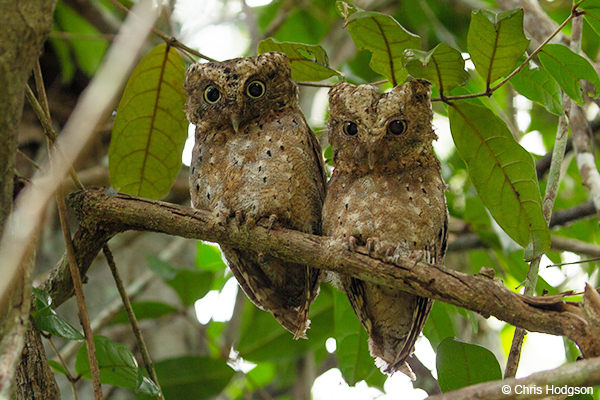 They looked absolutely mad. I felt as if I had opened the wrong door at a country house and discovered the first Mrs Rochester with her plus one: two lunatics kept upstairs out of people’s way, startled and furious at the same time. Their radically different appearance added to this impression of madness: identical expressions in two very different-looking birds.

Sokoke Scops Owls come in two forms: ashy-grey or ruddy ginger, which you’d think would confuse them, although it doesn’t. These two different morphs of the same species were perched side by side on a low branch: this was their day-roost.

We should all be respectful of island species: after all, it was island species that told us the meaning of life. Charles Darwin, when travelling on the Beagle, wondered why neighbouring islands in the Galapagos had different species of mockingbirds: the rest is history. It is also philosophy and science. 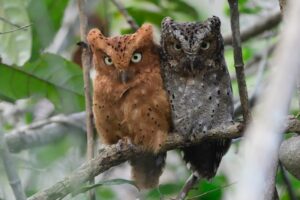 Had Darwin gone to Kenya he might have asked the same question about the Sokoke Scops Owl. This bird lives in an extraordinary island on dry land: an isolated chunk of forest on the vast continent of Africa, one that has, over time, become filled with species found nowhere else. It is a biodiversity hotspot: to be cherished for that reason, as well as many others.

They are tiny things, these owls: not much more than six inches long and a couple of ounces in weight. They eat the insects of the forest, mainly beetles and crickets. And you can look at them and wonder how they got to be different from the other 45 or so species of scops owl, and if you wonder long enough, you will come to the conclusion that Darwin did.

There is always something comic – in human eyes – about the small owls; they always seem so insistent on their dignity. But here is an owl officially classified as Endangered, and it lives in only one place in the world. It follows that we need to look after that place. That might also be defined as the meaning of life.

Help us save 810 acres of Kenya’s vulnerable coastal forest to secure the future of the Sokoke Scops Owl and other endangered species, including Clarke’s Weaver and the Golden-Rumped Elephant Shrew.

Buy an Acre for £100 (half an acre for £50 or quarter of an acre for £25) and your donation will enable our partner, Nature Kenya, to protect this precious forest.