There are more than 2,000 species of praying mantis around the world, and the Atlantic Forest of Brazil, where World Land Trust (WLT) works with partner REGUA, is a hotspot for insect diversity.

This is why Projeto Mantis, on The Mantis Expedition sponsored by a National Geographic grant, visited REGUA looking for rare and unknown mantis species.

The rarely seen Dragon Mantis, Stenophylla cornigera, was named because of its resemblance to the mythical Chinese dragons. It has ornate leaf-like appendages and moves slowly with a slight tremor to camouflage against leaves and imitate the natural movement of vegetation in the breeze.

This species was high on Projeto Mantis’s list of desired species, researcher Leonardo Lanna told National Geographic. “This mantis is considered legendary among specialists,” he added. “Seeing a live one is something few people have done.”

The team set up light traps designed to lure insects at night and found two male dragon mantises. “We couldn’t believe our eyes,” Leonardo said. “Now we are sure that, like most of the mantises, adult males are nocturnal fliers that guide themselves by moonlight.”

Their expedition also yielded some exciting discoveries that appear to be species new to science. One of the specimens lured in by their light trap was a hand-sized unicorn mantis (a group so-named for their prominent ‘horns’) with metallic red limbs that they did not recognise.

It was a “truly astonishing and majestic mantis,” Leonardo commented. He and his team are still investigating whether or not it is a new species, which takes time and detailed comparisons with museum specimens.

The purpose of the horn, which gives these mantises their name, is not yet known but thought to be another feature of their elaborate camouflage. Irregular shapes break up the silhouette of animals and make them harder to see, especially when still, against their forest backdrop. This is why researchers have to use light traps to attract insects.

Leonardo told WLT, “After our visit, REGUA became the most mantis-diverse hotspot in Rio de Janeiro State (and possibly in the Atlantic Rainforest so far) with at least 16 different species. We found 16 genera but we are suspicious that there may be different species within some genera.” The Atlantic Forest has been reduced by as much as 90 per cent from its historical range down the Atlantic coast of South America. It is an incredible ecosystem with some of the highest levels of biodiversity in the world, thought to contain many species that have not yet been discovered.

WLT works with partner REGUA to purchase remaining tracts of Atlantic Forest through the Action Fund, restore cleared land to reconnect forest fragments through Plant a Tree, and ongoing protection by funding a ranger through Keepers of the Wild.

Find out more about REGUA » 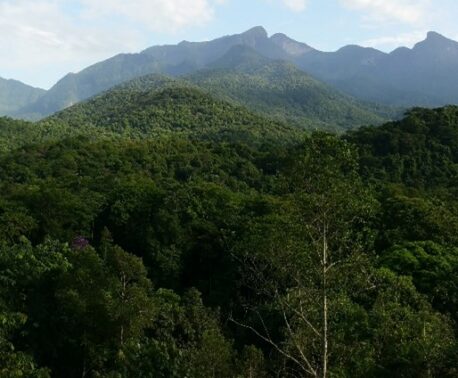 COP26: Brazil’s REGUA as a model of ecosystem restoration amidst the biodiversity and climate crises 09/11/2021

As world leaders gather at the COP26 summit to map out a way out of global warming, one thing is …