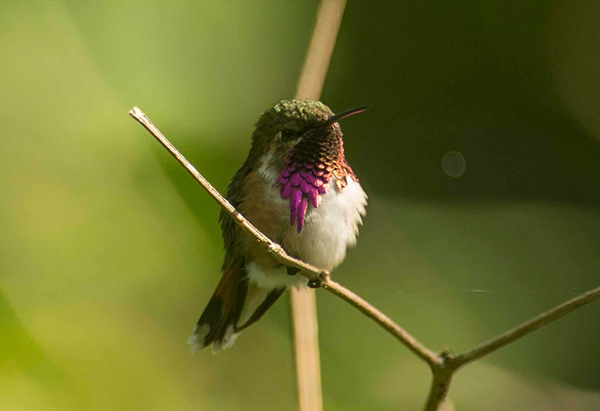 Simon Barnes writes about the cunning disguise of one of the world’s smallest birds in his latest post in his blog series, Barnes’s Bestiary.

Years ago I interviewed the great thriller writer Peter O’Donnell, creator of the immortal Modesty Blaise. I asked him about Nanny Prendergast — one of his better villains – she’s in The Xanadu Talisman, read it for yourself – and asked: “Where the hell did that idea come from?”

Laughing, shaking his head in helpless bewilderment, he replied: “No idea.”

It’s a question I’m often tempted to ask when I look at the creatures of the wild world. How the hell did they ever come up with that idea?

So here’s a bird that asks: “What can I do to get more than my fair share of food?”

And that’s precisely what the Bumblebee Hummingbird does. It doesn’t get the name just for being small – and it’s small even by hummingbird standards, no more than three inches long (7.5 cm) and weighing three-quarters of an ounce (2.2 grams). It also flies in the jerky, preoccupied manner of a bee and the hum of its wings sounds like the buzz of a bee. 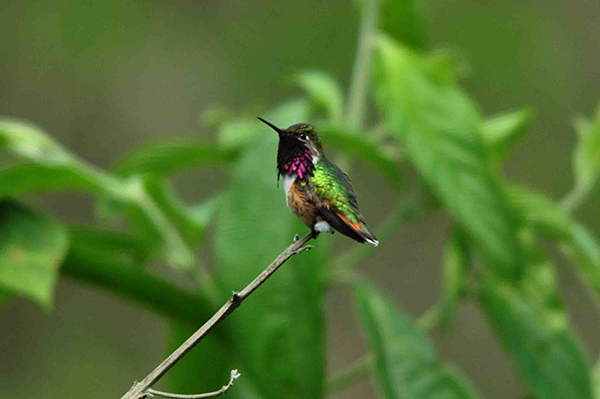 Hummingbirds are almost laughably aggressive birds. Their feeding territory is their life, and they will busily and nosily repel all species of hummingbirds from their patch. But the Bumblebee Hummingbird can often slip into the same patch of flowering forest, and the resident hummingbird will pay it no mind: it’s only a bloody bee, ignore it, it’s not a threat. Their disguise confuses the dominant hummingbird and allows them to drink their fill of nectar, hiding in plain sight.

And so armed with this cunning plan, Bumblebee Hummingbirds make a respectable living in the forests of Mexico. The males wear a dull black bib – but when they change direction and catch the light, this throat-patch explodes into a pink bright enough to blind you.

Humans need the forest as much as bumblebee hummingbirds: so it seems to me a good idea to hold onto the forests we’ve got left. The great forces of evolution created things that the most fertile minds in human history could never dream up. But humanity continues to create villains: shame Modesty Blaise isn’t around to deal with them.

The Bumblebee Hummingbird is one of the charming inhabitants of the ancient forests of Sierra Gorda World Land Trust is currently fundraising to protect. For every £100 donated, our partner in Mexico can purchase one acre of this precious habitat and place it under permanent protection.