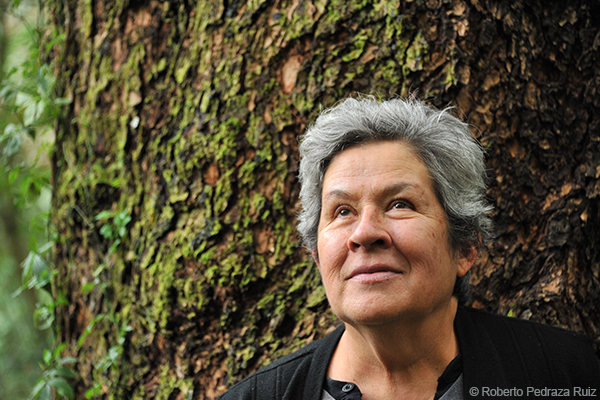 An agenda – to save the Sierra Gorda mountains that she loves

36 years ago, Martha “Pati” Ruiz Corzo sought a simpler way of life and she and her husband, Roberto Pedraza Muñoz, and her young sons, Roberto and Mario, moved from Querétaro city to a small community in in the rugged mountainous region of the Sierra Gorda in northern Querétaro State in Mexico. 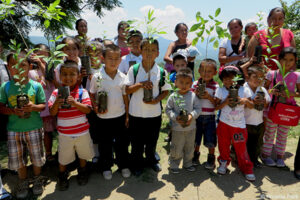 In 1987, together with local people, she co-founded Grupo Ecológico Sierra Gorda (GESG) to raise awareness about the biodiversity and its threats.

The result has been the creation of a grassroots environmental movement that has transformed natural resource management practices of the local population and re-oriented public investment from government authorities through environmental education, waste management, regenerative practices in soils and forests, sustainable rural tourism, community microenterprises, voluntary carbon offsets and a network of private nature reserves supported by the World Land Trust (WLT) among other partners.

Over the past 32 years Pati has gone on to receive numerous international awards and recognition for her pioneering resolve. 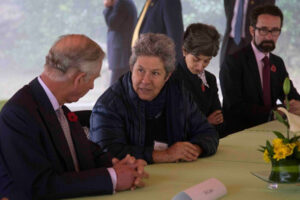 Pati meeting with Prince Charles on his visit to the city of Monterrey, México in 2014, chatting about environmental issues and the urgency of soil restoration through best practices. Image: © Roberto Pedraza Ruiz

Pati’s dream for GESG was to reverse environmental degradation and encourage sustainable use of the region’s rich natural resources. Local inhabitants are directly involved in conservation and economic activities within Sierra Gorda, which includes commercial tree planting (5 million trees have been planted to date), soil regeneration, protection of springs and watersheds and sustainable ranching and farming. A chief aim was to engage with the wider Sierra Gorda community leading to involvement of local teachers, parents and students. Together they take part in community surveillance groups, voluntary firefighting brigades and run 120 recycling storage centres.

Their public education campaign includes a variety of training programmes and 23,000 children a year learning about conservation and local development.

Pati has made a life commitment to the protection of the Sierra Gorda region. She has the ability to inspire pretty much everyone that crosses her path. With an imposing charisma, she is one of the most- respected environmental leaders of Latin America who turns words into action.

Protecting the Heart of Mexico –  a new film which made its debut during Climate Week in New York, in September

This new film focuses on the Sierra Gorda Biosphere Reserve in Mexico and the work being carried out by GESG. Over the years Pati has followed her vision that represented a unique model of community ‘conservation economy’. Her goal was to create a sustainable way of living for the more than 100,000 people living inside the Sierra Gorda Biosphere Reserve. She did this, and still does, particularly by empowering the historically-marginalised female population of the region.

The film follows the story of Pati and Roberto (Pedraza Ruiz), who heads up GESG’s Land for Conservation Programme. Through shared hope and determination, they are helping protect the 946,000 acres (383,000 hectares) of the biosphere reserve, conserving 15 different habitats including evergreen and deciduous tropical forest, shrubs and cacti, oak, pine and cloud forests in the Sierra Gorda mountains.

HELPING SAVE AND PROTECT SIERRA GORDA

Help sustain Sierra Gorda Biosphere Reserve and contribute to the work of GESG by supporting our Keepers of the Wild appeal. Your donation will help rangers patrol and maintain this threatened wilderness, protecting crucial habitats and saving species.