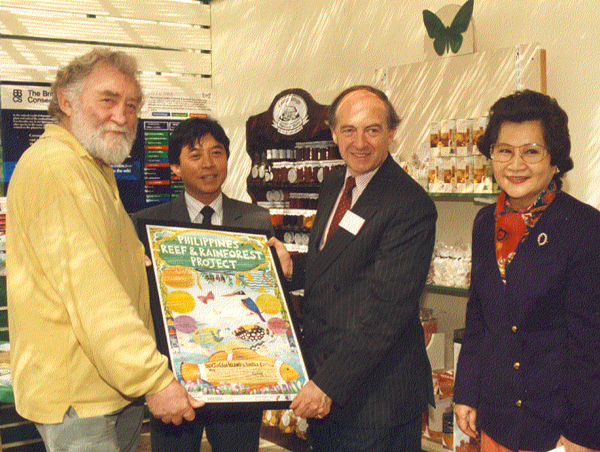 During the Eighties and Nineties, David was a household name as a TV personality and early pioneer of the conservation movement.  Always outspoken and never afraid of controversy, television audiences loved his novel twist to botany: BBC One’s Blooming Bellamy was a highly rated series where he entertained with his witty and insightful observations, in one episode suggesting that the absorbent and antiseptic sphagnum moss growing on a marshy Scottish hillside was the world’s first disposable nappy.

David Bellamy had supported World Land Trust (WLT) from its inception in 1989 and put his name to our early fundraising. He became a WLT Trustee in 1992 and that year he visited the Programme for Belize forests with John Burton (former WLT CEO). John recalls that they came across recently cleared forests, just outside the PfB reserve, which was still smouldering, demonstrating in a very vivid manner how real the threats were and the importance of PfB’s work. Commenting on what he had seen at the time David said:  “Here I saw real hope at the end of the long tunnels of despair regarding tropical rain forests. Every penny contributed to Programme for Belize does something to heal the wounds that are threatening to destroy the world.”

Today Programme for Belize owns and protect 262,000 acres. Land cleared for agriculture go up to the very boundaries of the PfB forests.

In 1994 David launched fundraising for WLT’s Danjugan Island project. This pristine island in the Visayan Island Group was threatened by unsympathetic development which would have had a disastrous effect on its forests and the surrounding fringing reefs. The 106-acre island is now a thriving sanctuary, home to 572 fish species, 244 different corals, 22 butterfly species and some 72 species of birds, from White-breasted Sea Eagle to Tabon Scrub Fowl. Hawksbill and Green Turtles nest on its beaches, while no fewer than 10 bat species are found in its limestone caves. 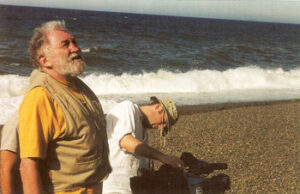 David gets ready for filming on the shores of Estancia la Esperanza, Patagonia.

In 2001 David introduced John Burton to Albert Abela, who soon became a committed friend and supporter of WLT, and later a Trustee and Chairman. Together with John Burton they went to Estancia la Esperanza (Ranch of Hopes), WLT’s coastal steppe project in Argentine Patagonia, and Mr Abela, became the first major donor to fund the purchase of the Estancia.  While they were there a video was made which included  wonderful footage of Killer Whales coming to shore. About his experience David said,

“The whales we were watching were having a great time cavorting in the water – there was white foam everywhere – they were also chasing a pod of South American Sea Lions near the beach. Time and again they dived up to the shore at great speed, intent on scooping up an unsuspecting victim. What an experience, one I shall never forget. And the Ranch of Hopes is a place I won’t forget either – a wonderful chunk of wilderness that simply couldn’t be replicated, thank goodness we have been able to save it.” 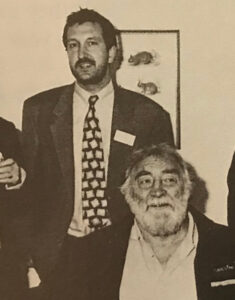 David Bellamy was someone who lived by his own rules. He fought tirelessly to stop the building of the Franklin Dam in Tasmania, spending his 50th birthday in jail for taking part in a blockade. He spoke out about the environmental effects of the 1967 Torrey Canyon Oil Spill and subsequent oil spill catastrophes and campaigned against nuclear power stations on UK coastlines.

Despite fighting for the environmental underdog he called himself “very, very happy”, saying, “I’m the luckiest man in the world. I married a wonderful woman, I’ve toured the world and I’ve stood on top of the world, I’ve made more than 400 television programmes and I’ve had one of the most wonderful lives.”