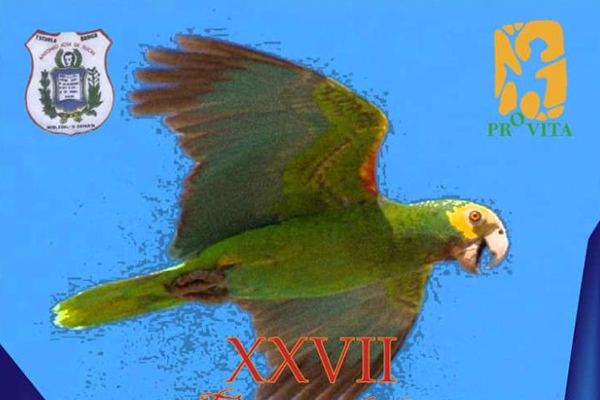 The Yellow-shouldered parrot (Amazona barbadensis) has a very small range along the northern coast of Venezuela and the islands off its north coast, including Margarita Island. This is where the World Land Trust (WLT) works with local partner, Provita, to protect the parrot and its thorn bush and cacti habitat. 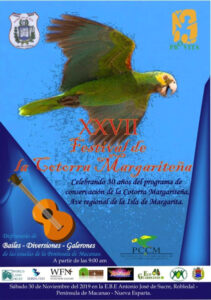 Provita, has, for three decades pioneered conservation on Margarita with stunning success.

The festival began with the NGO, Rescata Tu Isla, organising a beach clean-up at the Guiri Guire Beach, which was followed by spectacular singing and dancing. The parade through the streets of Robledal was led by the martial band Banda Show del deporte Bartolomé Ferrer. When they arrived in the Festival venue, the hosts delighted participants with the dance “Cotorra Margariteña” (Margarita’s parrot) by singer Nora Cardona. The event continued with songs, dances and poetry from nine other schools, cultural and environmental groups from different towns of the region. 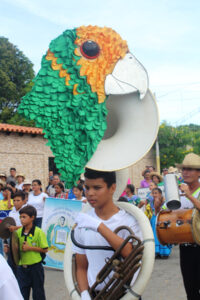 Activities to celebrate the Yellow-shouldered Parrot were organised by Antonio José de Sucre school in the town of Robledal. They were joined by other schools and cultural institutions of Macanao Peninsula, presenting traditional songs, dances and poetry. Image: Provita

Keepers of the Wild on Margarita Island, receive awards for their commitment and bravery

Before closing the Festival, awards were presented to Provita’s reserve guards (funded through Keepers of the Wild) in recognition of the vital role they play in protecting the nests of the parrots until the young birds fledge. The parrot chicks are targeted by poachers collecting them for sale into the illegal pet trade. Six years ago after poachers stole 16 chicks from nest sites on the island WLT helped launch the Margarita Island Parrot Appeal and has funded Keepers of the Wild since then. Their work can be dangerous and sometimes they risk their lives to protect their wildlife.

This year Provita and the Keepers of the Wild celebrated a 140 chicks successfully fledging – the highest figure recorded in the history of the programme (last year the number was 126). Provita pledged to continue protecting the parrots and their young and thanked the invaluable support of the volunteers, local communities and key supporters.

WLT congratulates Provita on 30 years of effective conservation action, safeguarding Venezuela’s wildlife, particularly the Yellow-shouldered Parrot, against a backdrop of economic and political crisis in the country. 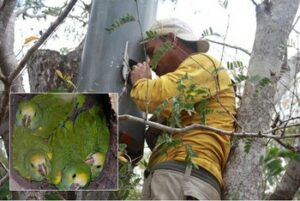 Reserve ranger, Pablo Antonio Millan is supported through WLT’s Keepers of the Wild programme; he was the first local guide to be hired by Provita to carry out Yellow-shouldered Parrot monitoring and management. Part of Pablo’s job is to ensure that they can breed safely, protected from illegal collection for the pet trade. He said: “It gives me great satisfaction when I see the fledglings coming out of their nests. I feel enormous happiness when I watch them fly free”. Image: Provita