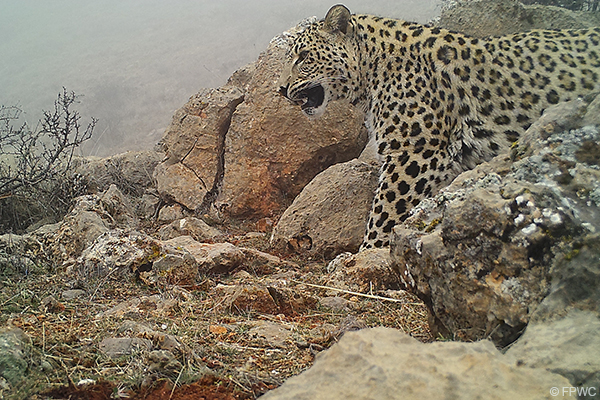 Our three-legged leopard is alive and well and travelling hundreds of kilometres!

It was at dinner on our last evening in Armenia that I was told some very exciting news. Supporters in the early days of this project will recall that one of the first Caucasian Leopards to be filmed on the Caucasus Wildlife Refuge was missing part of a back leg. This injury was thought to be the result of a landmine on the border with Azerbaijan. The leopard was later captured on trail camera 150 kms away some 18 months later. But now I was told that it had been camera trapped once again but this time in Iran. This is a truly remarkable feat (on only three feet!) Photographs showed that it was healthy and perfectly able to fend for itself.  What lovely news. 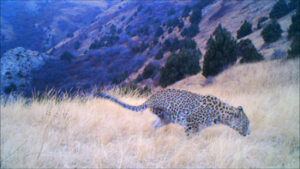 One of the first images captured on trail camera showed a Caucasian Leopard with a back leg missing. There was concern for its welfare but time has shown that it is perfectly capable of looking after itself! Image: FPWC

As always we were welcomed in traditional Armenian ways—the food at this time of year is amazing, with all the fresh and dried fruits and nuts and berries as well as cheeses and breads, for which the area is famed. The landscape may have lacked the lush greenness, and spectacular array of flowering plants of my earlier visits, but the mountains with their numerous gorges were spectacular as ever.

Much of the visit (as is normally the case) was taken up with meetings with local officials, but in Armenia several of the village mayors have become so enthused with the conservation activities that have been introduced into their communities by FPWC (WLT’s local partner) that we were treated as family. To me, one of the most impressive aspects of what WLT funding has achieved in Armenia, is not simply the protection of the Caucasus Wildlife Refuge, but the fact that whole communities are now involved and seeing benefits. FPWC supports communities in marketing locally gathered dried fruits, nuts, honey and herbs as well as ecotourism. 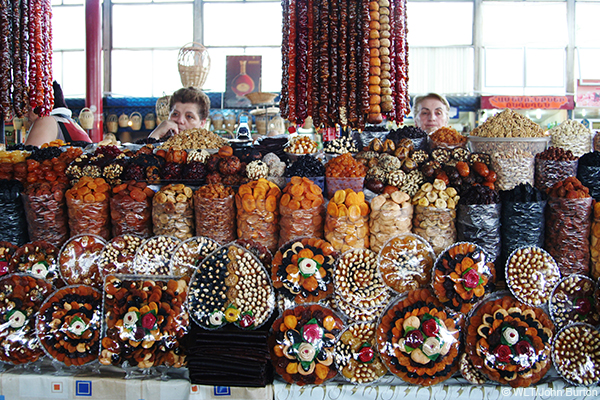 The Caucasus region is one of the most beautiful, and botanically as well as ethnobotanically important regions on Earth. It is synonymous with wild edible plant origins and most of our orchard fruit trees such as almonds, walnuts, pomegranate, plum, apples and pears, can be found growing in the wild. The shops in Armenia have a magnificent range of dried fruits and nuts on sale. Image: John Burton / WLT

On the very first day we had wonderful views of a flock of around 30 Bezoar Goats, and came across a very fresh footprint of a bear. 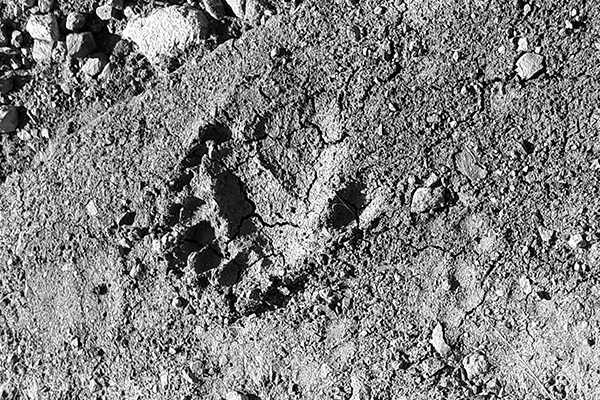 The foot print of a bear believed to be about two years old found when John was in the khrosov wildlife refuge. The reserve was originally funded by WLT and IUCN Netherlands. Image: John Burton/WLT

The ranger estimated that this was a young bear of two years old or so. Other interesting wildlife included close up views of Lammergeier and the arrival of a brief ‘invasion’ of Black-throated Thrushes—a rare sight in that part of the world.

Armenian ranger, Boris Vanyan, is one of the Keepers of the Wild funded through WLT by The Body Shop. He patrols part of the Caucasus Wildlife Refuge in Ararat region which is known locally as Leopard Canyon. It is an amazing, rugged landscape described in Armenian literature, notably in the writings of William Saroyan. Boris grew up in a nearby village and his forefathers surely hunted leopard there. But today Boris simply captures leopards on trail camera, and during 2019 he has recorded 10 sightings. Videos, photos, tracks – all proving the safe existence of the animal on its historic land. The leopard still lives in his canyon, just like Boris, alert to track his movements and keep him safe from hunters.

You can support the protection of the Caucasian Leopard and other threatened species in Armenia by contributing to our Keepers of the Wild appeal. Your donation will help rangers patrol and maintain this vital habitat.