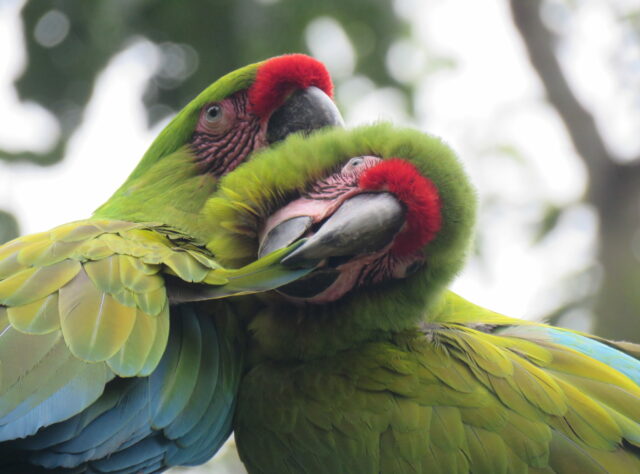 Since 2017, Fundación Jocotoco has released a total of 14 Great Green Macaws (Ara ambiguus guayaquilensis) into their Ayampe Reserve, to help the survival of this critically threatened sub-species of Great Green Macaw. This emblematic project is possible thanks to the support of Loro Parque Fundación, Fundación de Rescate Jambeli and the Las Tunas community.

Great Green Macaws have disappeared from the Ayampe region some 50 years ago, as a result of loss of its forest habitat to agriculture and ranching and also from the illegal collection for the pet trade. The total number of this species, the second largest macaw in the world (the Hyacinth Macaw is the largest), are thought to be less than 3,500. They feed on seeds, fruits, hard-shelled nuts, and flowers, and will move through the landscape in search of fruiting trees;  they are particularly partial to the Pechiche tree (Vitex gigantea), which provides food and nest sites across much of its range in Ecuador. These birds have a great importance on the ecosystem because they help to promote the natural regeneration through seed dispersal.

The release of the six additional individuals on 10 May 10 is the third Great Green Macaw release event and another milestone following three years of collaboration between Fundación Jocotoco, Fundación de rescate Jambelí and Loro Parque Fundación. The video below explains the lengthy process of from chick to release,

Congratulations to Fundacion Jocotoco on their 20th Anniversary

Fundación Jocotoco was founded in 1998, initially to protect the habitat of the newly discovered Jocotoco Antpitta. It has gone from strength to strength over the ensuing years establishing a network of 13 reserves which protect in total around 52,160 acres (21,108 hectares). Particular recognition goes to Dr Nigel Simpson, a co-founder of Fundacion Jocotoco and a Trustee and Council member of World Land Trust (WLT) since 2003. It was funds from the Simpson Educational Trust that helped establish Fundacion Jocotoco and since then they have not strayed from their mission to protect areas of critical importance for the conservation of the most threatened birds of Ecuador and the biodiversity that coexists with them. Their reserves are home to more than 900 species of birds, of which more than 50 are threatened or almost threatened with extinction on a global scale, and more than 100 species are regional endemics (or species of restricted geographical distribution).

Since partnering with Fundacion Jocotoco in 2000 WLT supporters have contributed to a magnificent £1,854,318 that has been sent to Ecuador for vital land purchase and protection.