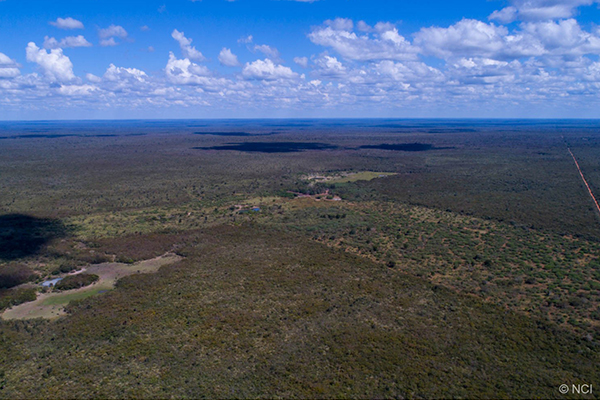 The approval of a new law enacted by the Indigenous Autonomous Government of the Charagua district in Bolivia declares 1.2 million hectares as a conservation area. This new law represents the first protected area to be created by an Autonomous Indigenous government in Bolivia and presents an opportunity to safeguard a continuous conservation area of more than 6 million hectares of critically threatened Gran Chaco forest habitat.

The law formalises the protection of the Ñembi Guasu area, which together with National Parks Kaa Iya in Bolivia and Defensores del Chaco in Paraguay, forms the biggest conservation area of the Chaco region covering an area of land similar in size to Sri Lanka, or twice the size of Belgium. This continuous territory has a long border with Paraguay that is linked with the Paraguayan Chaco Biosphere Reserve.

Iván Arnold, Director of WLT’s partner Nature, Land and Life (Nativa), has highlighted the region’s importance for biodiversity saying, “The territory is home to more than 100 species of mammals, 300 species of birds, and at least 80 species of reptiles and amphibians. In particular, the Jaguar, Puma, the Southern Night Monkey and the Southern Tamandua depend on this habitat and it is one of the few places in Bolivia where long-term plans can be made for the jaguar population and for other large animals that inhabit it.

In the Guaraní language Ñembi Guasu means ‘the great hideout’ or ‘the great refuge’; it is located in the former municipality of Charagua and is home to an indigenous Guaraní population. After occupying parts of eastern Bolivia for hundreds of years, the Guaraní of Charagua achieved autonomy in 2017.

“The delimitation and consolidation of ¨Ñembi Guasu¨ is not just about conservation, it is also about the wellbeing of the Indigenous ¨Guaraní¨ people.  We are conserving our home, home of our children and future generations,” said Adhemar Flores, a member of the Indigenous Autonomous Government of Charagua, when he announced the approval of the law. As well as protecting the natural resources and traditional culture of the Guarnai people in Ñembi Guasu this land is also important for a small Ayoreo population, thought to be the only uncontacted indigenous people south of the Amazon. Ñembi Guasu will be managed by the Autonomous Indigenous Campesino Government of Charagua (GAIOC), the governing body within Charagua.

To date, an impressive 68% (more than 5 million hectares) of the Charagua Iyambae territory has now been declared as protected areas, and two additional conservation areas are pending approval. However, this is just the start and additional support is needed to ensure the local conservation vision becomes a reality.

World Land Trust together with the IUCN National Committee of The Netherlands and Nature and Culture International assisted Nativa Bolivia and the GAIOC in establishing Ñembi Guasu. The call is now on the international community to support the indigenous autonomous government in protecting the land and adding new areas.

Stretching across Argentina, Paraguay, Bolivia, and into Brazil, the Gran Chaco Americano constitutes the largest forest mass in South America, after the Amazon. It consists mostly of semi-arid lowlands forests and wetlands encompassing a total of around 100 million hectares. The ecoregion holds huge reserves of water, energy and cultivable land, and a great diversity of indigenous peoples. But, despite its natural richness and socio-cultural diversity, the Gran Chaco is one of the most threatened areas in South America. Its diversity, land and resources are struggling against climate change and an expanding agricultural frontier.