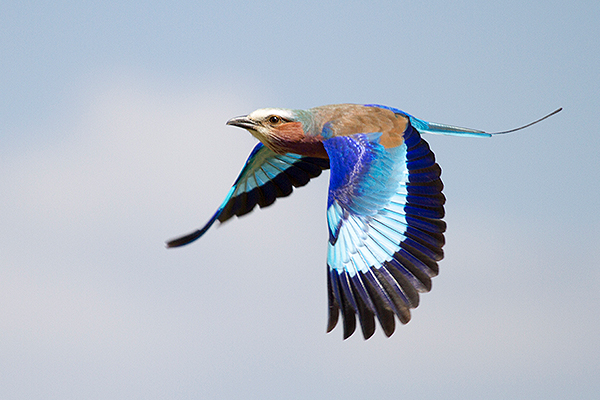 A kaleidoscope of colour in Kenya’s skies, no wonder the Lilac-breasted Roller is a symbol of the country.

Although the Lilac-breasted Roller is found throughout East and Southern Africa and is not difficult to see, it does rely on open woodland, savannah and bushy habitats for its survival. World Land Trust’s (WLT) latest appeal to save Dakatcha – a wildlife-rich swathe of threatened forest on Kenya’s north coast – will ensure that this dazzling bird always has somewhere to shine.

This photograph was taken by William Gray who has recently been appointed WLT’s Head of Communications. “It’s always a bit of a ‘kingfisher moment’ when you see one of these stunning rollers,” says Will. “Fanning their wings in flight, that shock of electric blue is bright enough to outshine any lion or elephant!”

Will studied zoology at Durham University and has 30 years’ experience as an award-winning writer and photographer specialising in travel and wildlife. He has also been editor of various publications, including Travel Africa and the Kenya Airways’ inflight magazine. Will’s first book, Coral Reefs & Islands – The Natural History of a Threatened Paradise was published in 1993. Donating the Public Lending Rights to WLT, Will became a founding member of its Green Ink scheme.

Will’s involvement grew with WLT when he worked on the Philippine Reef & Rainforest Project to save Danjugan Island. “For this gem of an island to be as pristine as when I first saw it 25 years ago is not only hugely encouraging,” says Will, it’s also a testament of just how effective WLT’s work with local partners can be. I hear the White-bellied Sea Eagles are still nesting in the tallest tree in Danjugan’s tangled rainforest. I never did get a decent photograph of them though!”