Not a crow at all, but the forest’s beating heart SEARCH NEWS 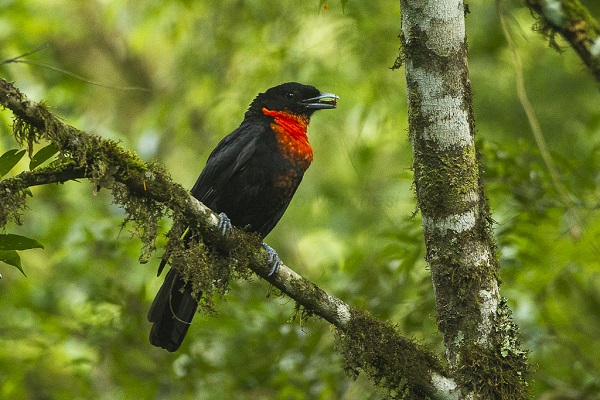 There are many small victories to be celebrated in the restoration of a forest. World Land Trust’s (WLT) Director of Conservation, Richard Cuthbert, describes an inspiring moment that captured the achievements of WLT’s partner Guyra Paraguay in reinstating Atlantic Forest.

We saw it together, a vermilion splash of colour amidst the canopy. Through my binoculars further brief glimpses were revealed through small gaps between the leaves: black feathers, flashes of red and the fact that it was huge.

“Yacutoro!!” Rodrigo exclaimed in a loud whisper that failed to contain his excitement.

I am not well versed in local Paraguayan bird names and Rodrigo rapidly turned the pages of a well-thumbed field-guide until he could show me: Pyroderus scutatus, the Red-ruffed Fruitcrow. It is a large, crow-sized bird, jet black apart from appearing to wear a scarlet bandana around its neck, and not a crow at all, but instead one of the largest members of the Cotinga family and one of the largest Passerines in South America. It was a new species for me and also a new species for San Rafael Nature Reserve, where I was standing. 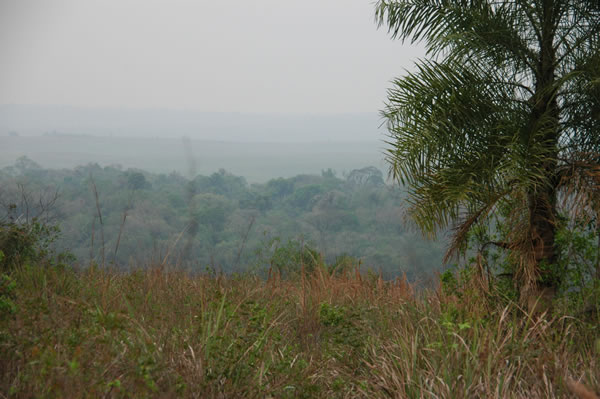 The Atlantic Forest of San Rafael.

San Rafael lies in the southeast of Paraguay and within a remaining fragment of the once great Atlantic Forest that covered an area of some 1.5 million km2, stretching across northern Argentina, Paraguay and Brazil. When people think of deforestation the image of the Amazon Rainforest often comes to mind. Yet as large as these losses have been they are dwarfed by the damage to the Atlantic Forest. Over the last four centuries nearly 90 per cent of the Atlantic Forest has been cleared, leaving the remaining areas in often small and scattered fragments.

Two of WLT’s partners, Reserva Ecológica de Guapiaçu (REGUA, Brazil) and Guyra Paraguay, have been working over the last two decades to help protect and restore the remaining Atlantic Forest. After a far too brief visit to REGUA’s reserve areas in the state of Rio de Janeiro, I was now visiting Guyra to see their conservation successes first-hand.

I was travelling with John Burton and we were in the knowledgeable company of José Luis Cartes (Pepe), Guyra’s new CEO, and Rodrigo Zárate, who leads Guyra’s conservation projects. With the support of WLT and other organisations, Guyra has acquired important reserves across the country taking in key habitats, including the Dry Chaco, Pantanal and Atlantic Forest. Land conversion for soya plantations and cattle ranching are the main drivers of deforestation in the country, but at the local scale, San Rafael was threatened by illegal marijuana crops and repeated grazing and burning of grassland areas by local farmers.

Within this environment, Guyra’s staff and rangers were working hard to conserve the remaining forest and natural grassland areas. As well as protecting the site, Guyra were also working to restore areas of forest and (through WLT’s support) had planted tens-of-thousands of trees in former agricultural areas. 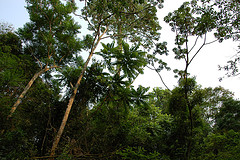 We were now standing in one of these patches and the 10 to 15m high trees were beginning to form a canopy. Beneath them the remains of once large and dominant areas of bracken fern, which had flourished in the former cleared land, were now being shaded out. An understorey of native shrubs and secondary tree species was emerging, bringing structural complexity into the restoration area. More importantly still, the larger frugivorous birds and mammals were coming back into the area: important, because these species were bringing further seeds and nutrients into the area and the presence of ever more species and diversity. The Red-ruffed Fruitcrow was a perfect example of this and it is fruit-eating species and which is normally only found in primary or mature forest areas. In the 12 years since Guyra had started this tree planting we were witnessing it within the restoration area.

Planting trees, as can be supported through WLT’s Plant a Tree programme, is only the starting point of restoring an area. If trees and forests are the lungs of the earth, then the Red-ruffed Fruitcrow and other returning species are the beating heart: pumping new species and biological diversity back into the forest, and once again creating a functioning ecosystem.

Those thoughts came later and in the few minutes that the Red-ruffed Fruitcrow remained in view I alternated between watching this spectacular bird and capturing the delight and pride in Rodrigo and Pepe’s faces.

WLT’s Plant a Tree programme is currently planting trees to restore the Atlantic Forest in Brazil with our partner REGUA. For each £5 donation to this programme, one tree will be planted and cared for to help build the forests of tomorrow. 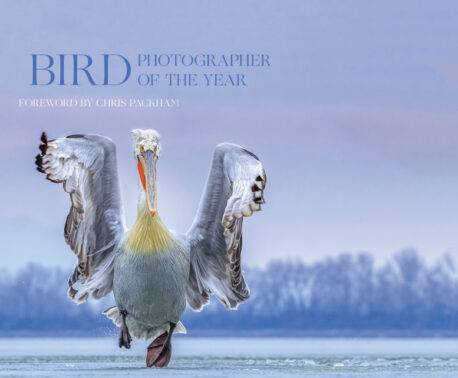 Bird Photographer of the Year and Conservation 04/08/2019 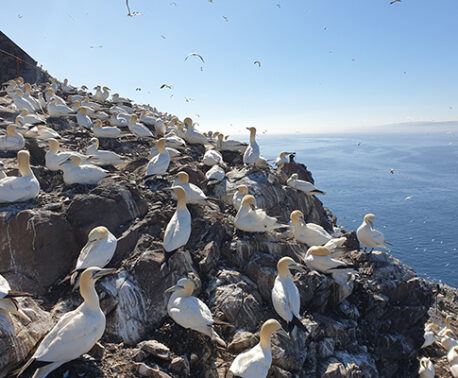 Dan Bradbury writes about his experiences on the John Busby seabird drawing course and the value of art to conservation.