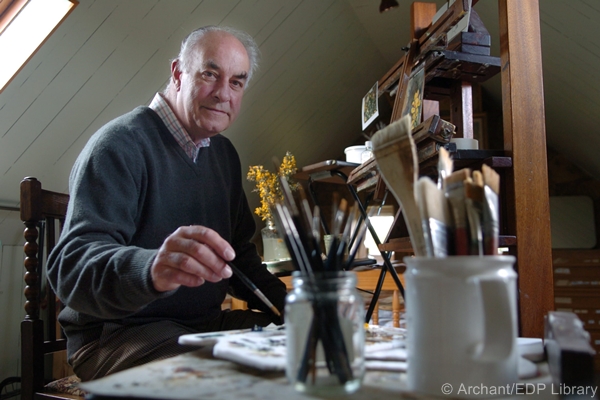 We were sorry to learn that long time World Land Trust supporter, Martin Woodcock died on 24 February at his home in North Norfolk.

Martin was a prolific wildlife artist who worked from his home near Blakeney. He was well known throughout the world for his illustrations in some of the most popular bird field guides, which include a Handguide to Birds of the Indian Sub-Continent, The Birds of Oman and the Gem Guide to the Birds of Britain and Europe which sold more than 500,000 copies. His greatest achievement was perhaps the seven-volume Birds of Africa that took him 25 years to complete, and included 220 plates of more than 5,000 bird figures from across the continent. 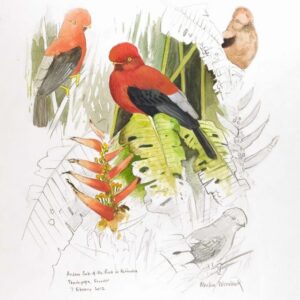 Cock of the rock field sketches by Martin Woodcock

Martin supported WLT by donating the Public Lending Rights (PLRs) to WLT’s Green Ink project. PLRs accrue everytime a book is borrowed from a public lending library and since travellers to foreign parts frequently search for field guides to the birds that they may see, his books were popular library loans. WLT will continue to benefit from Martin’s PLRs for a further 70 years.

Martin was a friend of WLT in every sense.  He was an annual visitor to the WLT stand at the British Birdwatching Fair and will be greatly missed by many WLT staff members who always enjoyed his company. He also visited the Halesworth headquarters of the Trust, and donated several of his paintings to the Trust when it was running a small gallery in what is now the reception area.

He was a great conversationalist, with a very well developed sense of humour, but first and foremost he was an ornithologist, an artist of immense talent, with a passion for birds and other wildlife.

Martin died peacefully at home, with his family;  everyone at WLT sends their condolences to his widow, Barbara.