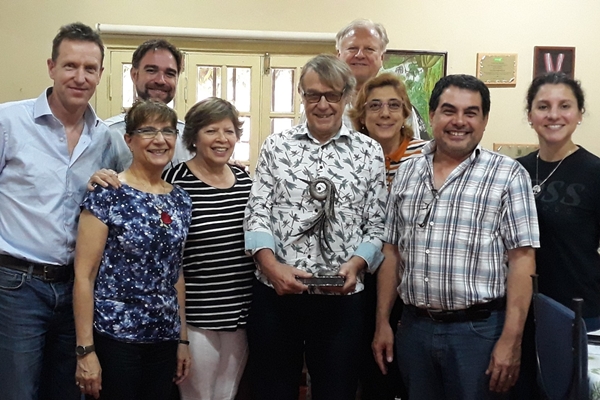 The award was presented to John Burton on a recent field visit to Paraguay by José Luis Cartes, the Director of Guyra Paraguay, on behalf of the board and the former CEO, Alberto Yanosky, who had made the award at their Annual Meeting in late 2018.

The Grito de la Selva award recognises an individual or organisation’s impact on the conservation of Paraguay’s natural habitats. José Luis said “Thanks to WLT support, we have been able to expand our network of reserves in many of Paraguay’s key habitats, including Dry Chaco, Chaco Pantanal and Atlantic Forest.

“These wild lands are home to our country’s most striking wildlife from Jaguars and Giant Anteaters, to Crowned Eagles and Black-fronted Piping Guans. We are pleased to present this award to WLT’s founders in recognition of the achievements made possible by WLT and its supporters.”

This award has previously gone to notable environmentalists such as Mr Carlos Martini, a sociologist and journalist, Don Bruno Chevugi, an Aché leader who lost his life defending the forests of his home; and Don Silvino González, a conservationist who has been defending the Chaco ecosystems for more than 40 years, mainly in the Defensores del Chaco National Park. In 2018, it was also presented to the retiring Director of Guyra, Alberto Yanosky.

The sculpture was made by celebrated Paraguayan artist Juan Pablo Pistilli, from his Cry of the Jungle exhibition, which was inspired by a visit to San Rafael, an area of Atlantic Forest protected thanks to Guyra Paraguay and WLT’s joint efforts. The award is inspired by the striking Bare-throated Bellbird, a symbolic species of the Atlantic Forests of Paraguay, Brazil and Argentina.

WLT has been working with Guyra Paraguay for more than ten years and has supported their land acquisition projects in important habitats such as Atlantic Forest, Dry Chaco and Chaco Pantanal. Most recently, WLT supported the purchase of 17,467 acres (7,069 hectares) with funding from Arcadia, a charitable fund of Lisbet Rausing and Peter Baldwin.

The Keepers of the Wild programme also provides ongoing support for the long-term protection of Guyra Paraguay’s reserves by funding the salaries of four rangers.