Deforestation at the border: the fight against Palm Oil SEARCH NEWS 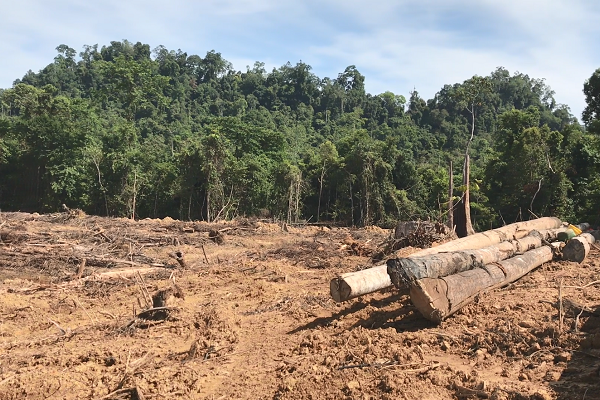 In Spring 2017, World Land Trust (WLT) Patron Steve Backshall launched the Saving Kinabatangan appeal to save an area of rainforest which had become available for purchase on the borders of Pangi Virgin Jungle Reserve in Malaysian Borneo. Without the appeal, WLT’s partner Hutan would not have been able to purchase the area, and it would have been sold to Oil Palm plantations.

Two years on, WLT Writer/Editor Nina Seale describes her visit to the WLT-funded reserve areas in the Kinabatangan rainforest.

Less than 100 years ago, Borneo was an island of thick, impenetrable forest that embodied everything we are taught to think of when we hear the word ‘rainforest’. Trees so tall you can’t see the canopy from where you stand. The rustling of monkey troops easily swinging their way through the branches above your head. Stepping into the giant muddy footprints of elusive forest elephants.

I knew this wasn’t the case anymore. Working for WLT, I’d heard all about the state of the rainforest, reduced to strips hugging the Kinabatangan River, surrounded by miles of Oil Palm. What I wasn’t prepared for was just how rich these remaining pockets of habitat still are. The resilience of Bornean wildlife is astonishing and heartbreaking, from the health of the secondary forests which have grown back after heavy deforestation, to the Pygmy Elephants, whose herds have adapted to live in this matrix of plantation and forest.

The fight for their survival is still ongoing. I visited the land on the edge of the Pangi Virgin Jungle Reserve, which was saved thanks to supporters of the Saving Kinabatangan appeal in 2017. It was thick rainforest, humming with life, but to reach it we had to walk through what I can only describe as an open wound. Land which had been living, breathing forest only two weeks before had been flattened in preparation for Oil Palm planting. The land had been subject to a bidding war between the conservationists and an Oil Palm land broker. It was devastating. We don’t always win. But it showed the importance of Hutan’s work, and I stood in the Pangi forest knowing exactly what its fate would have been if it had not been for the Saving Kinabatangan appeal.

WLT funds the ongoing protection of Hutan’s protected areas in the Kinabatangan rainforest through the Keepers of the Wild programme, which funds the important work of wildlife warden Berjaya Elahan. Berjaya patrols the river and the protected areas looking for signs of illegal activities such as poaching, as well as helping to monitor the reserves’ wildlife using trail cameras and boat surveys.

The work of wildlife rangers such as Berjaya is crucial. Please donate to the Keepers of the Wild programme to ensure the future of the reserves we have helped create.