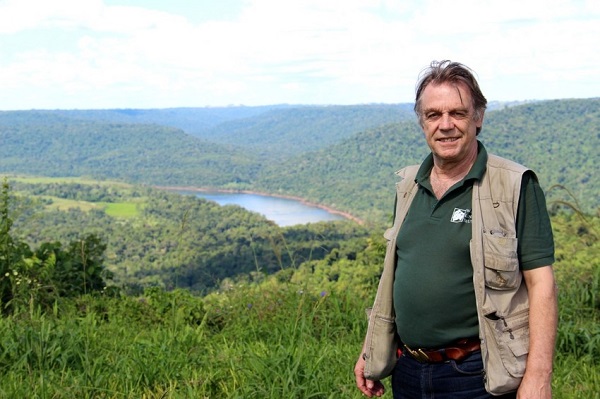 After the success of One Wild Night, when a host of adventurers entertained a full house at the Royal Geographical Society with stories about determination, endurance, and wildlife, World Land Trust CEO John Burton writes about his own adventures.

World Land Trust (WLT) Patron Steve Backshall and his gold medallist wife, Helen Glover, organised a very special fundraising evening at the Royal Geographical Society (RGS). They, together with a group of high profile friends, all spoke about their particular passions, and were compèred by Monty Halls. Simon Watt, the lover of ugly animals, resonated with me in particular, since I recall the days when bats were far from the popular animals they are now – the first job we had to do when I and a few others formed the Bat Conservation Trust was change public opinion. Of course the other speaker who I completely understood was George McGavin, the entomologist, who I found out studied at the Natural History Museum, shortly after I ‘retired’ from  the only ‘proper’ job I’ve ever had. The other speakers drew a completely different audience to learn about the work of the WLT, and these were the extreme adventurers: Leo Houlding, Sophie Raworth, Lowri Morgan and Sean Conway.

Now I, surprising as it might seem nowadays to those that know me, have done the odd slightly strenuous event in the past – I walked to Brighton overnight, and the only reward was a half pint of Guinness and a tie with toucans on it (I still have it) on getting there. This was in the days prior to fundraising on such events, and I also ran the Ben Nevis Race (the story is quite a long one), but just for fun – there was never any interest in winning as I knew it was an absolute impossibility with the fell runners from Barrow taking part, and all the Guinness we drank was the night before, in order to ensure a good night’s sleep camping. I once cycled to Penzance to go birding in the Isles of Scilly, and several times cycled London to Dungeness to go birdwatching for the weekend. But nearly all these, and several other undertakings, were done for reasons of impecuniosity or simple need. It was while listening to these great adventurers at the RGS, I realised that I must have the competitive gene missing. Or at least that type of competitive gene that drives people to extremes of endurance.

But then I pondered more, and wondered what these travellers brought back, and I rather suspect that they don’t have the collecting gene that I undoubtedly have. Everywhere I travel I am bringing things back and labelling them. In fact my earliest travels were inspired by the collectors of yore, and brought back specimens for the Pitt-Rivers Museum, the Natural History Museum and others. It’s in the public record (along with the results of the Ben Nevis Race, 1964), both Pitt Rivers and the NHM have their catalogues online.

But while the adventurers and I may not share certain driving forces, what we undoubtedly do share, and one of my colleagues at WLT pointed out, is a love, not just of the outdoors, but wilderness.  Perhaps I will combine this and set them all a Trans Chaco Challenge of some sort! Having driven the 600km to and from the edge of the Chaco, and then on in several times, with temperatures of 40 plus, it is no walk in the park. But I will happily potter around in the shade of the cacti, while others compete against themselves.