Sleeping in the canopy of a Bornean rainforest SEARCH NEWS 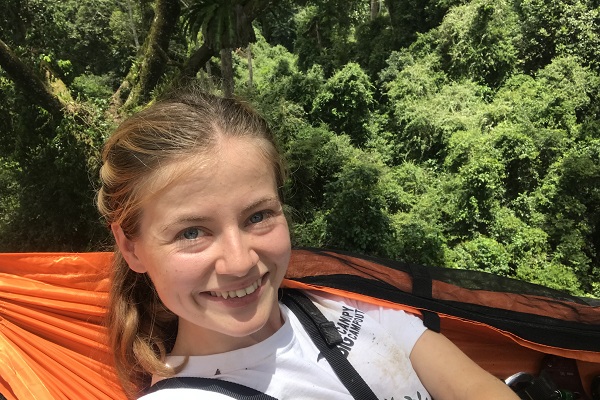 On the night of The Big Canopy Campout, people all around the world spent a night camping in forests to raise awareness of forest conservation and funds for the protection of the ancient forests of Sierra Gorda in Mexico. World Land Trust Writer/Editor Nina Seale joined an expedition camping in Bornean Rainforest and writes about the privilege of spending a night in the canopy.

The clue is in the name, really. Rainforest. We were supposedly in the dry season but, as with any expedition, things didn’t go to plan.

We had already spent three days in the beautiful primary rainforest of Danum Valley, where an incredibly talented team of tree climbers had set up a canopy camp made up of ropes, hammocks and many carabiners. But every afternoon so far the skies had opened up, drenching us to the skin, with no relief until the following morning. The weather was against us.

However, even the torrential rain struggled to dampen our spirits. We were in one of the most beautiful forests in the world, sharing our oxygen with orang-utans, elephants and hundreds of other creatures thriving in this rainforest habitat. During the day we climbed up our tree, through a dense understory dodging eye-poking twigs, rope-tangling vines and head-knocking branches, to a campout with the most phenomenal view. 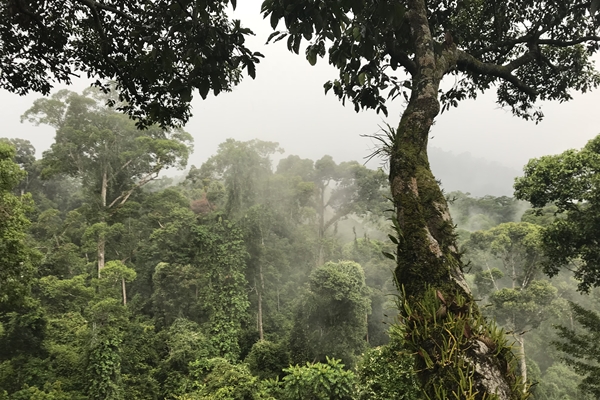 The view from the campout, through a rainstorm. © Nina Seale

Boots and socks were taken off and laid out to dry on arb-ropes-turned-laundry-lines. A freshly boiled kettle was hoisted up into the trees to make tea. In the warmest hour of the day, each hammock space was used for an afternoon nap… rudely cut short by a thunderous rumble from the sky and the start of the day’s rainstorm.

In the rain, the view changed again, blurring the silhouettes of the trees and absorbing the colours. Once the lightning began, we couldn’t stay to enjoy it, but the adrenaline of abseiling down away from the thunderous sky, descending through the incredible view, was worth missing another night in the canopy.

Back on the ground, relatively dry, we had a team meeting and came to terms with the fact an overnight canopy campout was probably not going to be possible. It was disappointing, but you can’t sleep in a tall tree covered in metal carabiners during a thunderstorm. I had been raising money for World Land Trust on JustGiving for the campout, as each climb required overcoming my significant fear of heights. I was sure people who had donated would understand I didn’t want to be a lightning rod.

But the next day, the rain never came. Expecting it, we came down in the afternoon and got ready for the night on the ground, but hours after night had fallen, it was still dry. 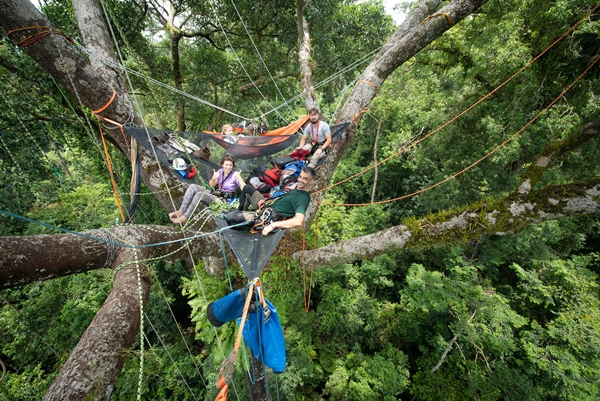 The team hanging out in the Tentsile hammock, 60 metres up in the canopy. © Andrew Walmsley

“We could do it…” Our team leader Vicki (one of the founders of The Big Canopy Campout) suggested. “If each non-climber had a climber sleeping near them, if it started raining, we could just bail out, one pair at a time.”

I wondered how much scarier abseiling down 60 metres through that treacherous understory would be in the dark and the rain. But as the other team members agreed, I found myself joining in. When would I ever get this chance again?

Harnesses tightened, helmets donned, head-torches on- we began. Surprisingly, without being able to see very far, the dark took away the lurching fear of heights I’d felt on every other climb. But the dark brings its own fears, especially when an unidentified creature with long, clicking wings flies into your face with no warning, or a vine catches your foot as you struggle to pull yourself through the understory. The closest I’d ever experienced to the deep darkness all around me was swimming in the open ocean.

Eventually the sounds and lights of the others, already in the canopy sorting out their sleeping spots in a nest of ropes, pulled me out of the dark. Before I’d even reached my campout spot, I could hear and see that the canopy was not as insect free as we’d hoped. Our head-torches were now elevated from the dense vegetation below, making each of us a bright beacon for buzzing, biting wildlife.

Some of the ants up there were the biggest I’d ever seen in my life. Once I’d turned my head torch off, trying to feel my way around instead of attracting even more insects, they felt even bigger as they ran up my arms. I sprayed my exposed skin vigorously with repellent and tried to tell myself that once all the lights were out, they would go to sleep too.

The torches were turned off, and we were silenced. Somehow, our luck had granted us a single night of cloudless sky, and through the branches of our tree we could see hundreds of stars. The sounds of the nocturnal forest hummed and beeped and chirred below. I wish I could say I stayed awake longer to enjoy it, but a 60 metre climb just before bed will send you to sleep pretty quickly. I woke up a couple of times in the night, as every now and then a new voice would add itself to the chorus of insects and frogs, and then, all too quickly, it was dawn. 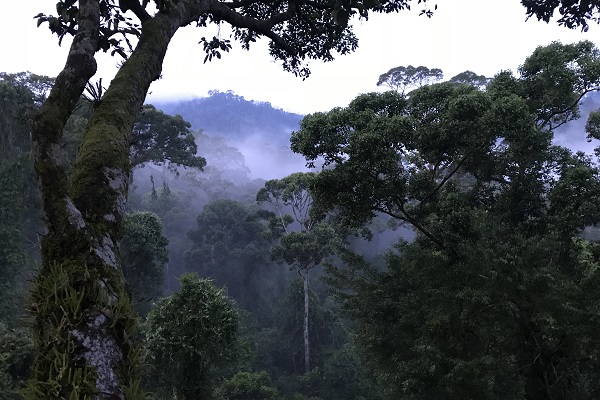 The dawn view from the canopy campout. © Nina Seale

The sun wasn’t yet in the sky, and the dim light had turned everything blue. Clouds were rolling through the forest around us, and the air was filled with the whooping song of a lone Bornean Gibbon. The view changed every minute as the sun rose through the sky, scattering shadows and sunbeams, and the mist rose and fell amongst the trees. Another whooping voice added itself to that of the first gibbon, and they began to sing together excitedly, their melodic cries echoing around us. The harsh crows of a hornbill began to pierce the air as well, and other songs and hums we couldn’t identify.

There are so many voices in a forest, many from animals which we never see. It’s easy to miss them when walking through a forest in the middle of the day. But spending a night in a forest and waking up to the dawn chorus, when all these hidden creatures are loudly making their presence known, gives a far greater understanding of the wealth of life living in these trees. This is the whole point of The Big Canopy Campout, an event organised by supporters of World Land Trust to encourage people to reconnect with forests, remember why they are so vital, and do our best to protect them.