Caught on camera: 10 species in the Jungle for Jaguars SEARCH NEWS 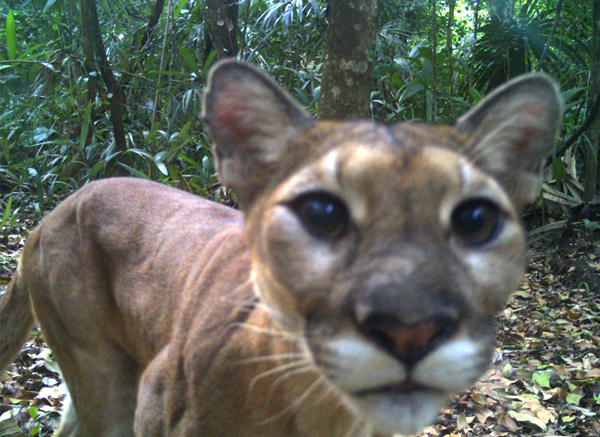 World Land Trust’s current appeal is aiming to save more than 8,000 acres of jungle in Belize, providing a corridor for wild Jaguars. However, one of the reasons habitat conservation is so effective is because it does not benefit only one species, and this jungle is no exception. In this article we explore some of the other species captured by our partner’s trail cameras within the Jungle for Jaguars corridor. 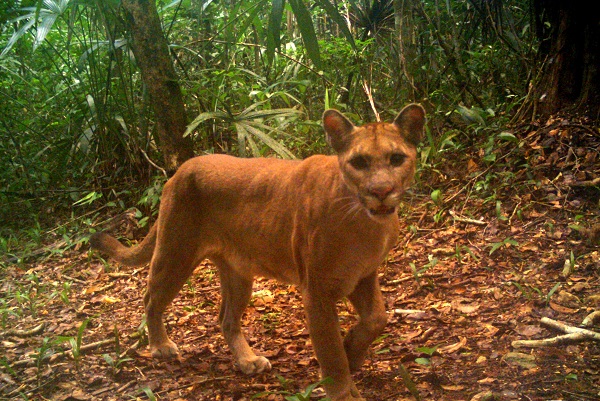 The Puma is the second heaviest cat species in the Americas, after the Jaguar. In the above trail camera images, it appears the puma is investigating the trail camera, which often happens with curious animals who pick up on the unfamiliar sight, sound and smell of the cameras. 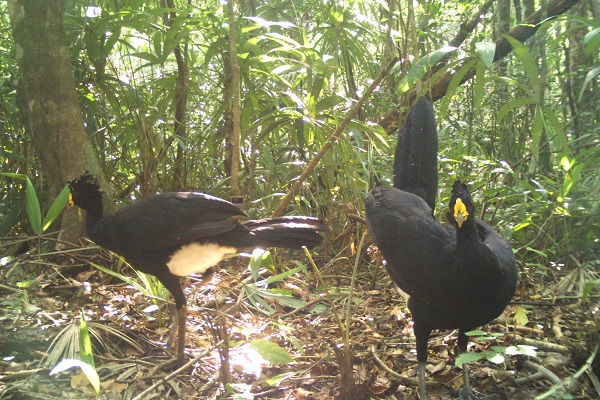 This image has captured two rather striking male Great Curassows, a pheasant-sized bird species found in neotropical rainforests. The females are a bit less conspicuous with chestnut colouring and a barred tail, and form monogamous pairs when breeding. 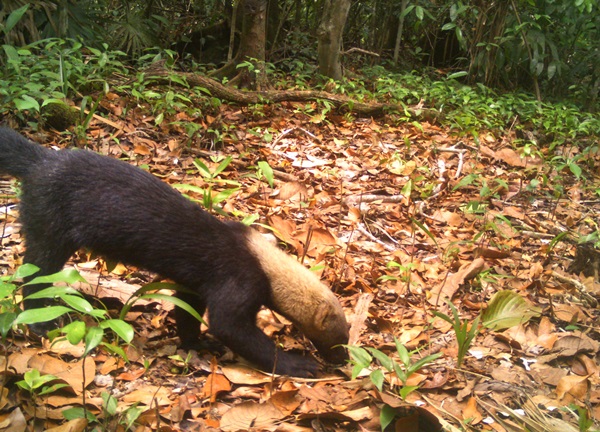 The rather lesser-known Tayra is an omnivore from the weasel family, though as it is the only species in the Eira genus it is quite unlike any other species. Some of its alternative names attest to this, the ‘barbara’ of its latin name meaning strange or foreign and its name in Trinidad means high-woods dog. 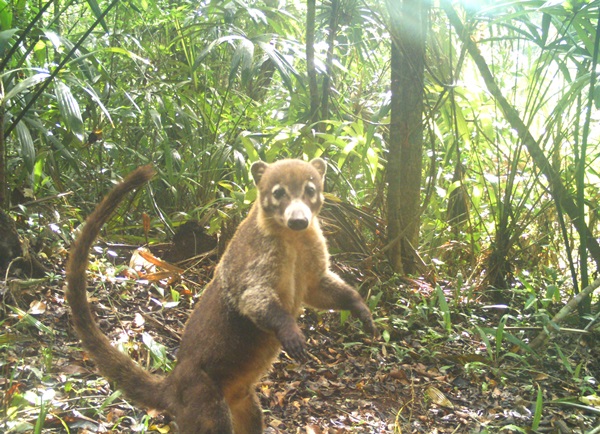 White-nosed Coatis, or Coatimundis, are intelligent omnivores in the same family as raccoons. The alert pose of the individual caught by this trail camera speaks to how vigilant they have to be in the forest, as they are a prey species for boas, raptors, big cats and Tayras. 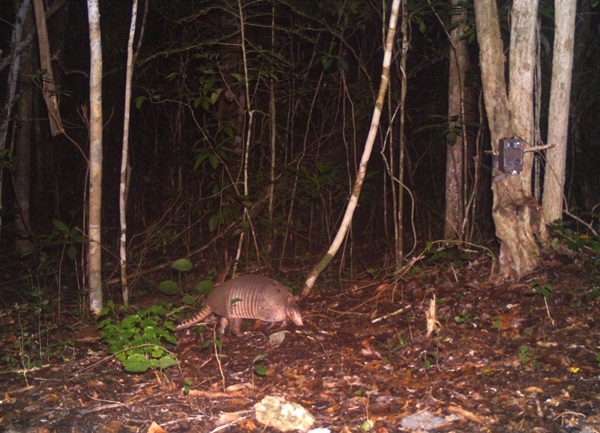 The Nine-banded Armadillo can be found in scrubland, open prairie, and tropical rainforest habitats, though due to its shape and a lack of insulation, it does not thrive in cold or dry environments. However, fortunately there are many good habitats for this species across central and south America, and it has a broad geographic range from the United States to Argentina. 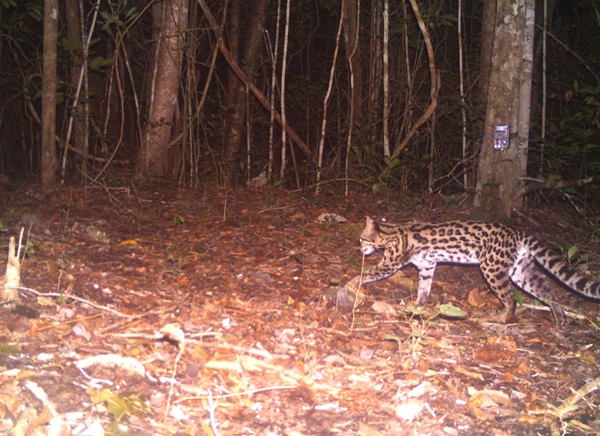 The Margay is a remarkable tree-borne cat which is well-adapted for living and hunting in the forest canopy, though they have been recorded hunting terrestrial prey such as Cane Rats and Guinea Pigs. For a good description of this remarkable canopy cat, read our blog from Simon Barnes here. 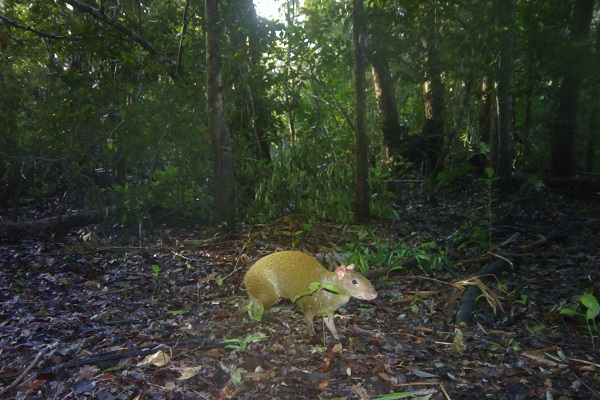 Another species on this list which provides a food source for the cats in the jungle, the Agoutis are active during the day and live in monogamous pairs. As well as the Central American Agouti, there are ten more species of agouti, native to Central and South America. 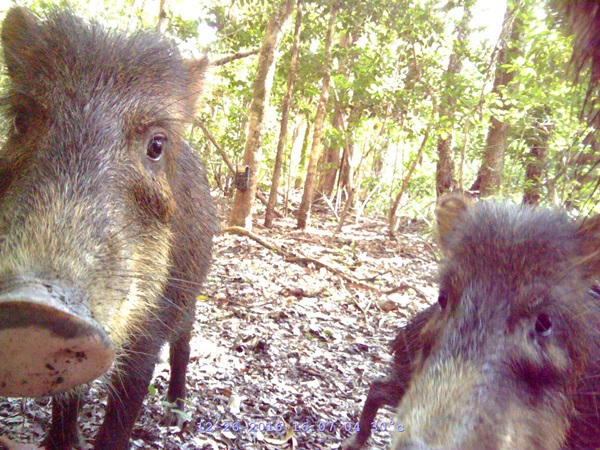 Healthy populations of White-lipped and Collared Peccaries in the Belizean jungle provide a very important food source for the Jaguars, as well as the other cat species in the forest. The presence of the peccaries, which live in large herds of 20-300 individuals, is also an indicator of a healthy forest ecosystem. 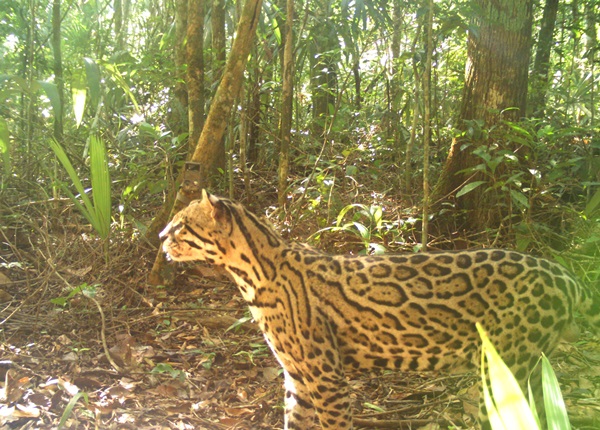 The Ocelot is an excellent predator which feeds on many of the non-feline species recorded on this list. With such a remarkable patterned coat, it is possible to recognise individuals and produce population estimates using trail camera images such as this. At the moment CSFI’s trail cameras in the Jungle for Jaguars are primarily used to record species and monitor the Jaguar population, but these cameras could be used to survey Ocelots in the future. 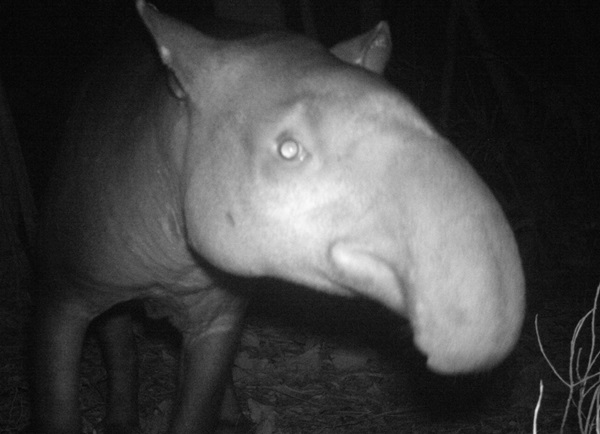 The IUCN Red List has classified this rather charismatic mammal, with its long and flexible proboscis, as Endangered as poaching and habitat loss have had a significant effect on its population. Any reduction in numbers to these tapirs is hard for a population to recover from, as they have a 400 day gestation period, after which only one baby is born, with multiple births being extremely rare.

All of the above images were captured by trail cameras within the wildlife corridor our partner CSFI is working to protect. By securing the 8,154 acres (3,300 hectares) we aim to save with the Jungle for Jaguars appeal, this corridor will be completed and the populations of these animals will be connected across an important forest habitat.

All donations to the Jungle for Jaguars appeal will be doubled by Big Match Fortnight between 3-17 October. 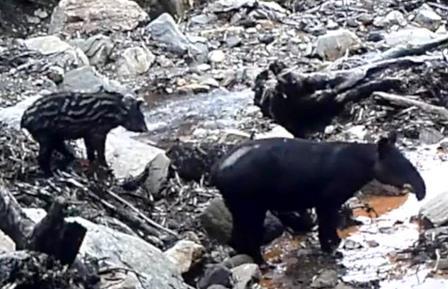 As a rule, communications staff at World Land Trust (WLT) tend not to spend their time looking for images of …