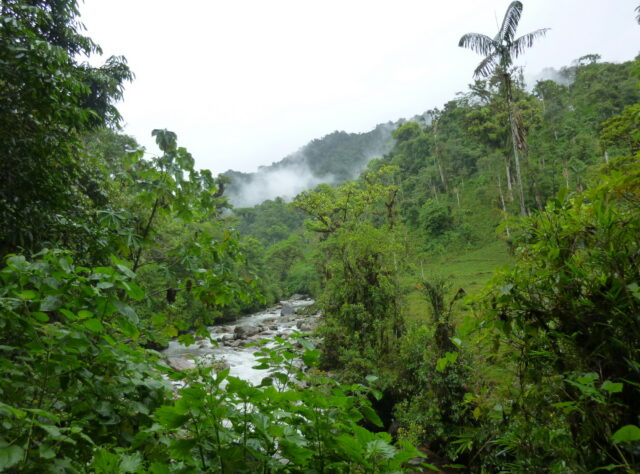 The appeal aimed to raise £165,000 to purchase the 400 acres in this critical habitat for threatened Ecuadorian wildlife, and we received an incredible response from our supporters to raise the funds quickly. This meant that shortly after the appeal was launched, a purchase of 175 acres could be made, and another 88 acres was purchased shortly after when it became available.

Now another 143 acres has been purchased, the 400 acre target has been exceeded, and due to our partner’s expert negotiation on land prices for conservation, there will be more still to come.

Further support from the Action Fund

World Land Trust’s Action Fund is a flexible funding stream which enables us to respond quickly to land purchase opportunities with our partners as they arise. When Fundación Jocotoco had an opportunity to extend their Tapichalaca Reserve, the Action Fund provided funds for this purchase, securing a further 88 acres of Amazonian Andes habitat.

The forest of Tapichalaca Reserve is at the perfect elevation for the White-breasted Parakeet, a bird listed as Vulnerable by the IUCN Red List as it is estimated that there may only be a few thousand birds left in the wild, due to habitat destruction.

Martin Schaefer, Executive Director of Fundación Jocotoco, says 2018 has been a really good year for land conservation so far. He says “The support that we received from World Land Trust donors for the Amazonian Andes appeal was incredible, and we are pleased to say that it looks like we will be able to protect more than the 400 acres we previously estimated, using their donations.

“The purchase at Tapichalaca is really superb forest, a prime example of what this habitat could and should be, and thanks to donors to the Action Fund, we will be able to keep it this way.”

The Action Fund is supported by individual donations as well as the regular monthly donation of £5 or more by Friends of World Land Trust. Donating to the Action Fund is the easiest and most effective way to support the range of our work, allowing us to respond quickly when opportunities arise.

Jose Acaro, one of our Keepers of the Wild at Laipuna Reserve, Ecuador, has been training in firefighting methods to use when faced with forest fire.