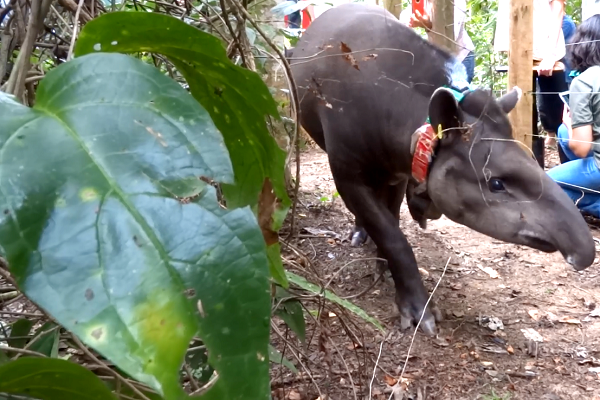 World Land Trust’s partner in Brazil, Reserva Ecológica de Guapiaçu (REGUA), has been restoring Atlantic Forest in the State of Rio de Janeiro and last year began a reintroduction programme for an important species that had become extinct in this ravaged habitat: the Lowland Tapir. Nicholas Locke (President of REGUA) writes an update on their progress.

Lowland Tapirs have been extinct in the state of Rio de Janeiro for over 100 years and the arrival of three tapirs in January 2017 at REGUA represented the very first reintroduction of its kind here.

Lowland Atlantic Forest has been virtually eliminated in the state and remaining forest is still heavily fragmented. In 2005, REGUA’s generous supporters including long-standing partner World Land Trust helped REGUA bridge some of those gaps by helping to create a habitat suitable for this reintroduction project.

Continuing the project that began last year with the release of our first three tapirs, another three individuals (two males and a female named Jupiter, Valente and Flora) have arrived at our reserve after a long journey of around 1,000km.

Sadly, I must report the loss of the large adult male from the 2017 introduction. He contracted pneumonia and died in March 2018 so these three new individuals are a most welcome addition to the remaining population of an adult female and her adolescent calf (Eva and Flokinho), who are both doing very well.

Following much local interest, the cases were promptly taken to be unloaded and the animals were released in their two and a half acre quarantine pen created especially for them within a secluded part of the wetlands. The quarantine area has a small pond in which they can play and enjoy a relatively natural habitat.

Benefits of the reintroduction

Reintroducing Lowland Tapirs into REGUA’s Atlantic Forest has several advantages. As well as returning this large mammal to its native ecosystem, the team from the Federal University of Rio de Janeiro involved in the reintroduction are keen to use the project as a way to learn more about this species and their adaptability.

Being herbivores, tapirs consume all the fruit they can find on the forest floor. They are regarded as the gardeners of the forest as, by consuming the fruit, walking long distances and depositing the seeds in new areas, they influence the botanical structure of the landscape. REGUA hopes the tapirs will disperse tree species throughout their range in this way, increasing forest diversity and ensuring its resilience in the long term. 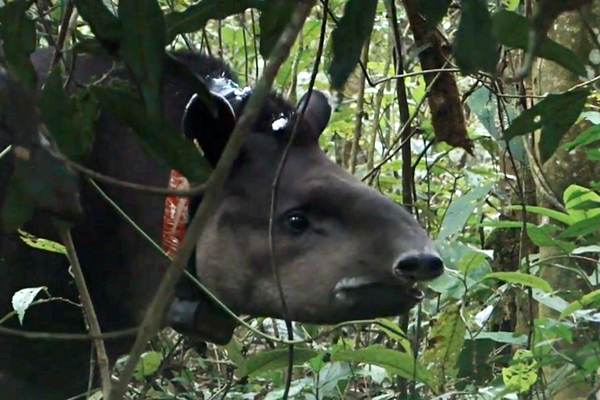 Flora the Lowland Tapir in her new Atlantic Forest habitat at REGUA. © REGUA

Until their release, the three tapirs will enjoy a diet of fruit and vegetables. The team provide up to 8kg per animal per day together with dried maize, to keep them well nourished.

This reintroduction project has been carried out in partnership with Professor Fernando Fernandez, Maron Galliez and Joanna of the Federal University of Rio de Janeiro and approved by the Rio de Janeiro State Environmental Department (INEA) as well ICMBio.

Professors Maron and Joanna will keep their eye on the tapirs ensuring that the radio collars, which will be used to monitor their movements, are not bothering them and they like their diet. After their release they will find fruit and maize nearby, but like most native animals they will probably prefer to roam and return to the solitary lives they enjoy.

Their release will provide valuable information as to their wanderings and habitat preferences, but there are already camera traps in the pen to check on their nocturnal behaviour and later more will be placed in the forest.

Exciting times ahead for our tapirs and our biologists!

World Land Trust funds reforestation in REGUA through our Plant a Tree programme, and land purchases for extensions to the Atlantic Forest reserve through our Action Fund.