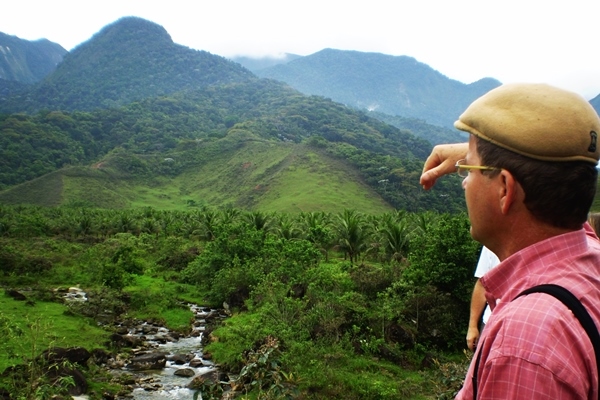 After working in World Land Trust’s (WLT) Halesworth office as part of the communications team for three years, former staff member Scott Guiver learned a lot about the importance of community involvement for wildlife conservation around the world from WLT’s overseas partners.

He had a chance to see the work of one of these partners in action when he visited Reserva Ecológica de Guapiaçu (REGUA), an organisation that protects Atlantic Forest and wetland habitat in Brazil, and in his fourth blog, explains why REGUA is so effective in the hands of its President, Nicholas Locke.

Nicholas Locke is one of those people who is having a monumental impact. Like so many other conservationists his work is not a day job, it is a lifestyle. An unwavering mission to preserve and restore the fragmented remains of the Atlantic Forest.

Only seven per cent remains of this great forest, which once stretched down the Atlantic coast of the South American continent, through Brazil, eastern Paraguay and northeast Argentina. Piecing the remaining fragments together is an urgent and important task, and by acquiring and reforesting farmland, REGUA is building corridors to connect the remaining tracts of forest. Mature patches of Atlantic Forest are being purchased by REGUA too, and altogether these plots of reforested farmland and mature forest are the pieces in the jigsaw of REGUA’s vision to restore this magnificent habitat.

From the years I spent working in the WLT office, I already knew the story of REGUA and how support from WLT for acquiring land and reforestation is imperative to making this vision become reality. Having now seen it first hand, I would enthusiastically recommend that any WLT supporter reading this should do the same, you will not be disappointed. It is worth noting that REGUA is particularly well equipped for ecotourism, with comfortable and well placed accommodation and experts in bird, Lepidoptera (butterflies and moths, of which REGUA has lots of beautiful species) and tree identification to show you the rare delights of the Atlantic Forest.

During my stay, Nicholas and I visited newly acquired land that was being planted with thousands of young trees by people employed from local communities. We also visited neighbouring farmers, and each time we made a trip we would stop several times on route for Nicholas to catch up with various people. The point I’m trying to make is that the restored landscape Nicholas and the rest of REGUA’s team is working towards has to consider the needs of local people, farmers, landowners, community members, every person who will be affected by the jobs created, ecotourism business and reforested land.

It takes someone like Nicholas to relate to the people, build trust and keep them involved in the project, it is this quality, together with his dedication and commitment to restoring the Atlantic Forest and that makes him such an effective conservationist.

Scott volunteered as a Bird Guide at REGUA for a month, and has already written three blogposts on the WLT website about his experiences:

WLT has supported various land purchases to extend REGUA through special appeals and the Action Fund in the past, and currently supports reforestation and long-term protection in the reserve through the Plant a Tree and Keepers of the Wild programmes.