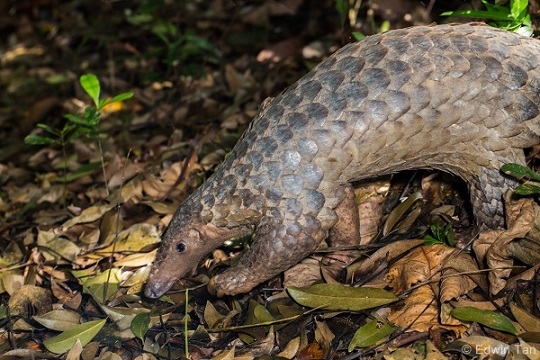 The Critically Endangered Sunda Pangolin has been elevated to totally protected status in the state of Sabah in Malaysian Borneo, following an announcement by the Sabah Tourism, Culture and Environment Minister Datuk Masidi Manjun.

This level of higher protection means that anyone convicted for possession of a pangolin or its scales will be imprisoned for a minimum of six months, up to five years. The previous level of “Protected” meant that hunting pangolins was legal with permits, though these were rarely issued.

Datuk Masidi Manjun announced the news at the launch of a pangolin sculpture at the Sandakan Airport here today. The sculpture was built by built by Japson Wong of JF Production from recycled polycarbonate advertising boards and used bottles. It aims to raise awareness of the threats to Sabah’s wildlife, in particular the highly trafficked Sunda Pangolin.

TRAFFIC, the wildlife trade monitoring network, has reported several substantial seizures of pangolin scales by customs officers in Sabah over the past few years. One analysis of record books seized from a warehouse in Sabah showed that 22,000 pangolins had been trafficked from that one location over a period of 14 months.

“Sabah’s commitment to saving the Sunda Pangolin is to be commended and couldn’t come at a better time with World Pangolin Day just ahead of us,” said Kanitha Krishnasamy, Acting Director for TRAFFIC in Southeast Asia.

“The species is under incredible threat from illegal trade with the unyielding demand for its scales and meat. Upping the risks for poachers and traffickers sends a clear message that they’ll have to pay for their crimes.”

Pangolins have received increasing international protection over the past two years, with all eight species listed under Appendix I of the Convention on International Trade in Endangered Species (CITES) in September 2016. This bans commercial trade and represents the highest level of protection available under international law, but the laws on domestic trade and punishment for trafficking is still in the hands of each nation.

All eight species of pangolin have been subject to high poaching pressure due to the value of their meat and scales in China and Vietnam. The meat is considered a delicacy and a status symbol, and the scales are believed to have medicinal properties, despite there being no scientific evidence to support it (pangolin scales are made of keratin, the same substance in human hair and fingernails).

World Land Trust’s (WLT) efforts to protect the Sunda Pangolin are focussed on WLT’s projects in Vietnam and Malaysian Borneo, where the Keepers of the Wild programme funds the salaries of rangers in Khe Nuoc Trong and the Lower Kinabatangan Wildlife Sanctuary.