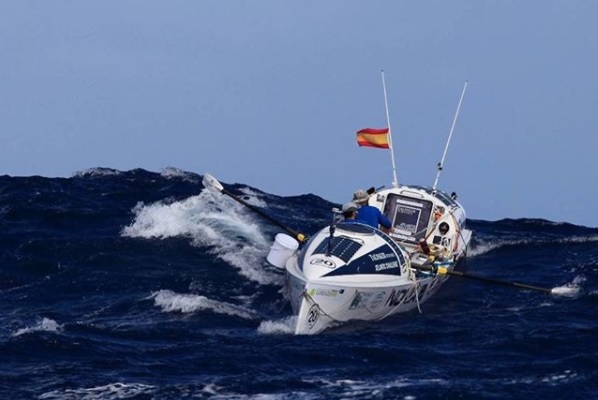 Carbon neutral rowing team Carbon Zerow have completed their transatlantic journey from La Gomera in the Canary Islands to Antigua in the Caribbean, 45 days after they set off in December.

They were greeted by wild cheering from friends and family as their boat approached Nelson’s Dockyard, waving four bright flares in the tradition of triumphant teams at the end of the Talisker Whiskey Atlantic Challenge (TWAC).

Setbacks on the sea

From the day the race was supposed to start, and stormy weather delayed the launch, the signs for the journey were ominous. Once the race began, it became apparent that the team’s watermaker (which turn salt water into freshwater) was not working, and following that, problem after problem befell them. One of their autohelms failed, their batteries were not charging properly, their main satellite phone failed, their alternate phones and electrics were all corrupted by seawater and the boat’s centreboards (for stability in rough seas) both broke off in the surge.

However, they showed remarkable teamwork in the face of these challenges. Team member Kyle Smith tells WLT, “We are all very strong and opinionated individuals but when it came to making difficult decisions we performed remarkably well as a team. With each challenge we encountered we assessed the situation, canvased ideas from all four of us and usually we would reach a solution that was a composite of all four opinions/ideas.”

Their ability to keep morale high was reflected in the haiku updates they sent throughout their journey on their social media:

Two rowers are up
Wind and waves are kind to us
We all have sore butts.

A flying fish flew,
hit the boat,
a shark had dinner.

A haiku by Carbon Zerow.

Half a knot slower.
Barnacles were the culprit.
Goodbye freeloaders!

What’s next for Carbon Zerow?

With the journey now complete, the four team members are heading their separate ways back to their homes in the UK and the US. In order to complete their carbon neutral mission, they need to finalise their records for the expedition’s carbon emissions with The Carbon Trust, and then offset these emissions through World Land Trust’s Carbon Balanced programme.

“Every day felt like the hardest day, but seeing the faces of my shipmates, whether smiling in the sun or grimacing in the rain or cold, instilled an aura of strength and resolve in me.”
Philip Van Benthem, Carbon Zerow

“We’re all back in our respective homes moving on with our lives,” says Philip Van Benthem.  “Whether that be new business ventures, finishing PhDs and starting a family, heading overseas to study, or in my case, moving to Oklahoma to run a congressional campaign. But that isn’t the end of Carbon Zerow.”

Carbon Zerow approached World Land Trust (WLT) when they began their mission to make their crossing carbon neutral, using WLT’s Carbon Balanced programme to offset their unavoidable emissions. One of the most important parts of this process was reducing the emissions associated with the expedition, by reducing pre-race travel for meetings and using public transport when necessary, cutting red meat out of their diets while training and obtaining any equipment they needed second hand where possible.

Philip adds that this is what they are taking away with them from Carbon Zerow, “We’re continuing now, and forever the merits of being environmentally conscious, and living a sustainable lifestyle.”

They are hoping that moving forward Carbon Zerow will be able to work with and inspire other people taking on physical challenges and expeditions to aim for carbon neutrality.

As well as offsetting their unavoidable emissions through Carbon Balanced, Carbon Zerow have also used their challenge to raise awareness and funds for WLT by donating a portion of their total from their GoFundMe campaign to WLT’s conservation programmes.

If you are interested in completing a challenge and fundraising for wildlife conservation, you can download the WLT Fundraising Pack with advice and ideas here.