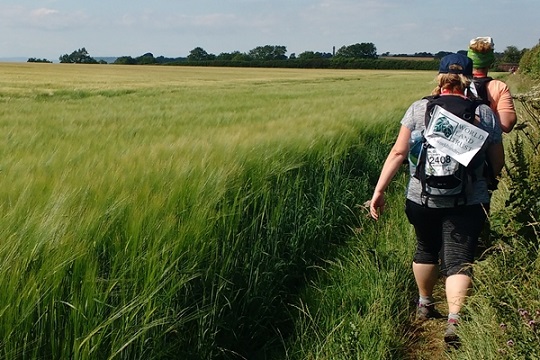 Lisa Henderson admits openly that she is not the most athletic person, but that did not prevent her from signing up to walk 100 kilometres in the Cotswold Way Action Challenge to fundraise for World Land Trust (WLT) last year.

After successfully completing the mammoth challenge and raising £1,000 for WLT’s Action Fund, Lisa has decided to do another Action Challenge this year, walking 50 kilometres across the breathtaking Jurassic Coast.

Lisa was inspired to fundraise for WLT after hearing about WLT Patron Steve Backshall’s kayak race for Borneo last year on Facebook, and chose Action Challenge, who organise outdoor events and inspirational events all over the world, after it was recommended by her fitness instructor.

Training for an Action Challenge

“The Cotswold Way was a new walk taking place in July which gave me, and the two friends who agreed to do it with me, plenty of time to train for it,” Lisa told WLT. “Training wasn’t as hard as expected because I loved it- coming from New Zealand, where I have done some treks with heavy packs and food, I knew what to expect, and I love the British countryside so what a perfect place to walk.”

“Generally my friends were impressed and supportive, with an edge of scepticism that perhaps we may not make it (but I’m not the most athletic person so that was fair play). Their support was what made me so determined to make it to the end, because I had my friends’, families’ and colleagues’ money on it.”

“One of the best parts was discovering my own backyard, so to speak. I did many local walks on my own and found some beautiful areas right where I live in Hertfordshire. The Cotswolds walk was stunning, and the weather was perfect on the first day, about 17°C and cloudy, but the following day was tough at 22°C and my right quadricep muscle decided to stop working.”

“I want to support WLT again as it’s such an important cause. Preservation of ecosystems in cooperation with local communities has to be the best model for wildlife conservation”
Lisa Henderson

Lisa carried out the walk with two friends, Susan Graham and Sarah Field, and she said that doing the challenge with them kept her spirits up through the difficulties caused by her leg. She said the kindness of strangers also made a big difference. “A lovely lady who did the 50 kilometre challenge gave me her walking poles and, just when I was at a low point walking up one of the steepest hills that went on and on, we passed by a row of houses where a girl was offering all the walkers an ice lolly.

“I will never forget that ice lolly, it was like heaven wrapped in plastic. What a lovely gesture from these people that didn’t know us. They had no idea how well received and needed that icy delight was at that moment.”

“Action Challenge were also fantastic organisers, and their rest stops were perfect, with plentiful food and beverage of wide variety.”

Lisa has decided to do another walk with Action Challenge this year, saying that walking 100 kilometres was a once in a lifetime achievement for her, so she is aiming to walk 50 kilometres on the Jurassic Coast. “I want to support WLT again as it’s such an important cause. Preservation of ecosystems in cooperation with local communities has to be the best model for wildlife conservation.

“Anyone can do this,” she says for anyone considering signing up for an Action Challenge. “I’ve never been all that fit, it just takes a fair bit of training and commitment to that training to complete as much as 100 kilometres. There are shorter options though, so I’d say try an easier length first if you’re unsure.”

Find out more about Action Challenge and sign up »

This year Lisa’s fundraising target is £275. Help her reach her target »