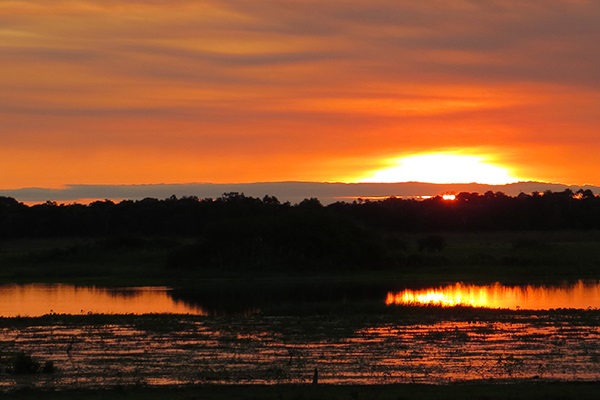 “With small steps we can tackle seemingly insurmountable barriers,” said David and Katharine Lowrie, who meant what they said quite literally as they ran 6,504 miles across the length of South America- the equivalent of 250 marathons in 15 months.

They fundraised for several charities, including WLT’s partner Asociación Armonía, and the pair took a couple of days off on their journey to visit Armonía’s Barba Azul Reserve and search for the Critically Endangered Blue-throated Macaw, described below in an exclusive extract from Katharine’s book, Running South America with my Husband and other animals.

Tall grasses and reeds swept the horses’ bellies as we edged around the swamp. We were making for the distant palm islands, which lay far beyond the research centre, where Blue-throated Macaws commute for feeding. A volley of barks exploded from the vegetation in front of us. Enormous guinea pigs galloped for the water, detonating a wave of spray from under their hairy legs. They were capybaras, the largest rodents in the world, and they reminded me of a gaggle of overweight Edwardian bathing ladies. They came in all sizes, with the smaller ones being mirrors of their robust, tubby parents and grandparents. Shocked by our appearance, they disappeared under the water. But after a few minutes, faces began to pop up beside the lily pads and rushes, like little hairy hippos, curious about us- as curious as we were about them.

“Wetlands are always wildlife magnets, through the richness of plants and invertebrates, which attract a cornucopia of birds and animals”
Katharine Lowrie

An enormous party of American Wood-storks were patrolling the shallows a little further on, like expectant undertakers with their ‘arms’ held behind their backs and long, downward-pointing, thinking ‘noses’. They were joined by Brazilian ducks, sporting scarlet beaks and black mullets. Wetlands are always wildlife magnets, through the richness of plants and invertebrates, which attract a cornucopia of birds and animals. Even as we left the swamp, the sky was full with skeins of storks gliding towards it from the surrounding grasslands. We fixed our heads back against our necks, watching these aviators. Then something crashed into the corner of our view. A cloud of macaws was streaking overhead.

We counted 16 in total. They called to one another, piercing the air with their repetitive, hoarse shrieks. Could this be them- a party of one of the rarest birds on earth? We could see only their silhouettes at first, and neither of us could tell the difference between what is meant to be the more raucous call of the Blue-and-yellow Macaws and the slightly lighter call of the blue-throats. But [our guide] Jernan knew; he had listened to these birds all his life, unaware that the flocks flying over his ranch represented one of the last hopes for saving the species from extinction. Our three sets of eyes met and he nodded, grinning. It was them. As if answering our wishes, the birds broke off to the south, flying directly over us. As they drew closer we watched their dark forms transform into a dazzling display of gold and indigo.

Blue-throated Macaws are an emblematic species for the rich habitat Katharine describes in the Beni Savanna. They are classified as Critically Endangered by the IUCN Red List due to poaching for the exotic pet trade and habitat loss, and Armonía’s work conserving their habitat in Barba Azul is crucial for the survival of this species.

WLT has supported their work in Barba Azul by funding reforestation through the Action Fund, a Natural Fencing project through the Blue-throated Macaw Appeal and is currently funding the salary of Barba Azul ranger Carlos Roca through the Keepers of the Wild programme.

To read the whole chapter about Barba Azul in Katharine Lowrie’s book, you can order a signed copy and find out more about Katharine and David’s journey on their website, or by following them on social media (Facebook, Twitter and YouTube).