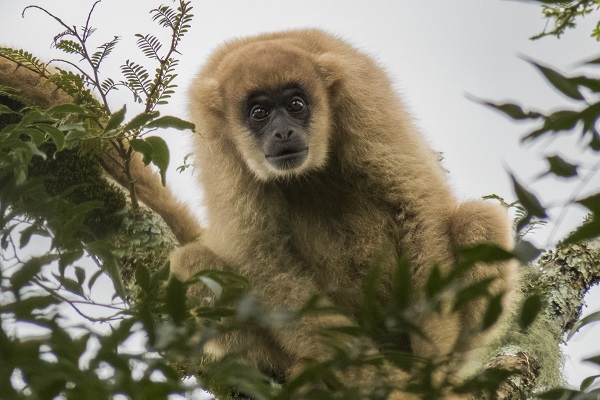 The population of Southern Muriquis, an Endangered primate endemic to Brazil, in Reserva Ecologica de Guapiaçu (REGUA) is estimated to be the largest in the state of Rio de Janeiro.

Brazilian researcher Andre Lanna is conducting his doctoral studies on mammal diversity of the ever-disappearing Atlantic Forest habitat in Brazil, looking specifically at a segment of the Serro Do Mar Ecological Corridor in the state of Rio de Janeiro.

After completing his Masters on the Northern Muriqui (Brachyteles hypoxanthus) in the state of Espírito Santo, his work informed the national action plan for the conservation of this Critically Endangered species. He began his work in REGUA looking at the presence and ecology of large mammals, as well as the threats facing them, and became interested in the population of Southern Muriqui (Brachyteles arachnoides, also known as the Southern Woolly Spider Monkey) living there.

“When he started walking the REGUA trails,” Nicholas Locke, co-Director at REGUA, told World Land Trust (WLT), “He unexpectedly met a troop of the rarer Southern Muriqui and realized that the population at REGUA was larger than we thought.

“He continued setting up his camera traps and caught significant registers of the Mountain Lion, Margay, Ocelot together with Peccaries and rare forest birds but his interest had turned to the magnificent Muriquis. He now thinks that REGUA has the largest population of this species in the state of Rio de Janeiro!”

The future of the Southern Muriqui

Andre is hoping that his research on the Southern Muriquis and other mammals in REGUA will help inform their conservation, as his previous work did with Northern Muriquis. “All of Rio de Janeiro’s Southern Muriquis can be found in six protected areas within the Serra do Mar Ecological Corridor,” Andre told WLT.

“However, despite the protection, there is no forest connection between these forest fragments. This is important for the species because young female muriquis emigrate from the group where they were born to reproduce in other groups, so there is a great need to connect the different forests along the corridor, allowing the migration of young females and population growth.”

Other than fragmented habitats, the other major threat to be tackled for muriqui conservation is hunting. “REGUA has fought an intense fight against hunting for more than 10 years, which has made the population recovery here possible,” Andre adds.

REGUA have engaged with local communities around the reserve with an environmental education programme for the past decade, with incredible success. Incidents of hunting in REGUA have diminished significantly and the wildlife has flourished as a result. As there are still occasional traps and snares found, ranger patrols to find and remove them are still important.

You can support the important work of REGUA’s rangers through WLT’s Keepers of the Wild programme, which funds the salary of Rildo da Rosa, and help ensure the future of REGUA’s precious population of Southern Muriquis here: