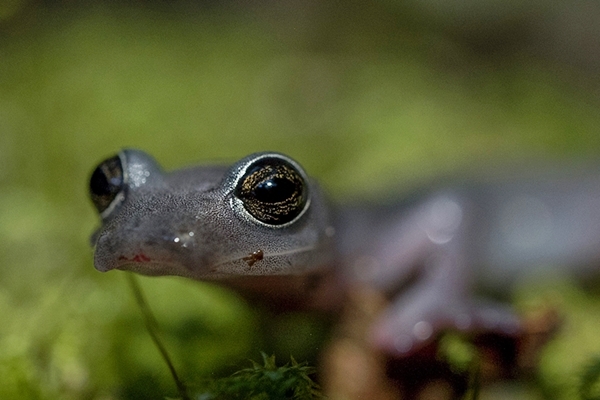 The Mexican Cloud Forests represent the best of North and South America. Many of these small green islands, lost in the mist of Mexico’s sierras, have been destroyed for cornfields and pastures, and to satisfy the greed of loggers. Countless species of flora and fauna have been lost, ecosystem services have been diminished, and its extraordinary scenic beauty has been compromised.

But, we have not lost it all. In the state of Querétaro located in Central Mexico, the Sierra Gorda Biosphere Reserve forms part of the grand Eastern Sierra Madre. Home to GESG’s operations, the reserve protects some of these precious forests.

From towering oaks, to tree ferns, firs, sweetgums, cypresses and Mexican basswoods covered with a thick layer of moss, bromeliads, and orchids, these Cloud Forests represent authentic, biological laboratories that are home to species of flora and fauna which are only now being discovered. The forest itself creates the mantle of permanent mist that surrounds it through climate regulation and groundwater recharge, which ensures a water supply for the vast human population of the region.

As the Head of GESG’s Land Conservation Program, I am in charge of the protection of 10 private nature reserves within the biosphere. We purchase land with high biological value, so we have prioritized the protection of the last Cloud Forests in the Sierra Gorda, home to Jaguars, Margays, and new species of Magnolias.

Within our reserves, chainsaws, cattle ranching, and all other economic activities have been banned, and it has been extremely gratifying to watch the flourishing wildlife be restored as a result. It is an honour to combine my work with wildlife photography, especially since photography has proven to be an excellent tool to showcase a variety of Sierra Gorda’s species for the outside world.

“I have known these forests and mountains since I was a child, crossing them on foot and on horseback. Visiting them is like a trip into the past…”
Roberto Pedraza Ruiz

I have known these forests and mountains since I was a child, crossing them on foot and on horseback. Visiting them is like a trip into the past, since one can observe the wealth that once covered the entire Eastern Sierra Madre: great mantle of tropical forests at its foot, and pines, oaks, and firs on its highest peaks. Last week, I had the opportunity to once again explore the forests that are neighboring the area threatened by the issue of a logging permit.

Accompanied by a local guide, we visited a dark, humid cave which was hiding a small salamander, climbing a stalactite some thousands of years old. I must admit that I highly appreciate and favour small amphibians that are facing a sixth “great extinction”. Many of the remaining salamanders are now endangered and micro-endemic. They successfully survived the mass extinction that wiped out the great reptiles late in the Cretaceous period, about 65 million years ago but are now in greater danger than any other vertebrate group.

I have photographed other salamander species in that area (Pseudoerycea belli, P. cephalica and P.leprosa, all of them endangered), and immediately something told me that this one was different. Once back at the office, I sent some photographs to the experts on the subject and three of them independently confirmed the species’ identity. We had found the Big-footed Salamander (Chiropterotriton magnipes), a species that is micro-endemic to a small stretch of the mountains between Querétaro and San Luis Potosí and is, according to the IUCN’s Red List, “Critically Endangered (Possibly Extinct).” The species’ profile on the Red List also mentions that forest degradation, therefore the subsequent loss of humidity and temperature changes in the subsoil, have caused the disappearance of this small cave dweller.

The status of the species amazed me. Even though several new plant species in Sierra Gorda have been discovered because I photographed them (such as magnolias Magnolia rzedowskiana and M. pedrazae, as well as the new species of carnivorous plant that is currently being described), rediscovering a species was completely different. To think that this species had already been added to the list of probably extinct species, but we found it again, was much more rewarding and shows the true importance of conservation actions in priority habitats. A true daughter of Mexico’s forests, the result of millions of years of evolution, natural selection, and adaptation, is still here, surviving in the misty peaks of the Sierra Madre. Her presence serves as a reminder of the importance of GESG’s work- keeping chainsaws out of the forest makes all the difference to species on the brink.

Alone, these forests survived a long history of siege and destruction. But now we have to fight to make sure they are effectively protected against the population growth and the consequent increased demand for resources.

“Three months ago, residents of Xilitla… alerted us that the state’s delegation of the Ministry of Environment and Natural Resources (SEMARNAT) had authorized the logging of 5,000 acres of Cloud and Temperate Forests.”
Roberto Pedraza Ruiz

Three months ago, residents of Xilitla, a county of the neighbouring San Luis Potosí, alerted us that the state’s delegation of the Ministry of Environment and Natural Resources (SEMARNAT) had authorized the logging of 5,000 acres (2,000 hectares) of Cloud and Temperate Forests. It is an area where the traditional corn-planting activities of its inhabitants, that mainly belong to the Náhuatl and Teenek ethnic groups, have left the slopes of the Sierra Madre bare to grow corn.

Barely alive and in its highest region (adjacent to the Sierra Gorda Biosphere Reserve), one can find approximately 17,200 acres (7,000 hectares) of well-preserved and, in some places, primary forests. Yet the Federal Government authorized logging almost one-third of it, receiving financing from the National Forestry Commission for the development of the Forest Management Program.

After sending a document to the SEMARNAT in which we pointed out the numerous inconsistencies and omissions, as well as the obvious dismissal of biodiversity and the impacts the project will have on it, we received a response from the state’s delegate, refusing to revoke the authorisation. However, GESG have continued the campaign to stop the logging, both nationally and internationally, and the permit has been temporarily suspended.

So the fight is still on to have is permanently revoked. I ask you the same question we are asking the authorities- what is more important than protecting a forest which supplies water for our communities, stores carbon for cleaner air, and secures habitat for Mexico’s precious wildlife, from the Jaguars to the last Big-footed Salamanders?

World Land Trust is currently raising funds for important land purchases in Sierra Gorda to protect these ancient forests from threats such as man-made forest fires and land clearance. We have worked with our partner GESG to create reserves in this area for more than ten years, and have saved more than 10,000 acres to date. Please help us to continue protecting this habitat and its magnificent but threatened wildlife by donating to our Ancient Forests appeal.