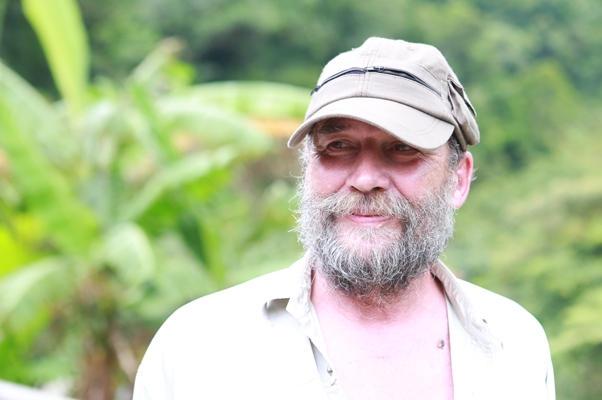 Friends and colleagues from all around the world paid tribute to Roger Wilson, the late Director of Conservation at World Land Trust (WLT), at an event held at the Royal Geographical Society celebrating his life and his incredible impact on wildlife conservation.

“A year or so after Roger and his wife Regine had been running the Mountain Gorilla Project, I made a site visit. It was here I got to know them both, and where I encountered Roger’s modus operandi, which was later to influence the development of World Land Trust.

“I remember one evening with Roger, drinking the local palm beer and smoking in a thatched hut with the local community leaders. I listened to Roger (who spoke fluent French) hearing their views on the issues surrounding the Gorillas, and the Parc des Volcans, that were of concern to the local community. This way of getting under the skin and understanding local aspirations was key to his success.”

Roger’s understanding and empathy working with local communities was spoken of many times in the following reminiscences. Mark Rose, CEO of FFI, spoke of the success of the Mountain Gorilla Project and its importance for the people of Rwanda.

The importance of involving the local communities in gorilla conservation to Roger when he worked on the Mountain Gorilla Project was shown in a short Nature Watch documentary in 1983. In an interview with Julian Pettifer, Roger spoke of the plight of the gorillas and the importance of inspiring the younger generation to protect their forests and wild inhabitants.

Mark spoke of the continued success of this project as just last week, President Paul Kagame of Rwanda officiated the 13th Kwita Izina, a gorilla naming ceremony, in Musanze with thousands of people in attendance. Mark also read out a tribute to Roger received from Sir David Attenborough.

“Roger reminds me that this is a lifetime commitment, and we will all continue the projects he helped us build”
Marco Cerezo

After the Mountain Gorilla Project, Roger worked around the world and particularly West Africa for larger organisations, including the European Union. He was hired by John again in 1990 to provide technical support for WLT’s first project, Programme for Belize.

Edilberto Romero, Managing Director of Programme for Belize, spoke of how Roger paved the way for this forest conservation project to be successful and self-sustaining. Other WLT Partners had also travelled to London to pay tribute to his memory, including Vivek Menon, Executive Director of Wildlife Trust of India (WTI), who spoke of his impact on the success of the Garo Hills project, and showed a clip of a memorial held in honour of Roger in this project area.

Pham Tuan Anh, President of Viet Nature, gave a moving speech about Roger’s confidence in the importance of her organisation’s project in Vietnam, Khe Nuoc Trong, and the work they have been able to do with his help.

Marco Cerezo, Director General of Fundación para el Ecodesarrollo y la Conservación (FUNDAECO) in Guatemala, recalled the influence Roger’s talents had on conservation. “Roger reminds me that this is a lifetime commitment, and we will all continue the projects he helped us build.”

The event was not just a celebration of Roger’s career, but also of how he affected people’s lives personally, and many stories were shared. Simon Barnes, journalist and WLT Council Member, shared an entertaining story involving Roger, a long-drop latrine and a spitting cobra.

Several of WLT’s partners are naming project areas in his memory, and all donations made to the Roger Wilson Memorial Fund will go towards the purchase and protection of a 2,500 acre (1,000 hectare) reserve in Caribbean Guatemala.