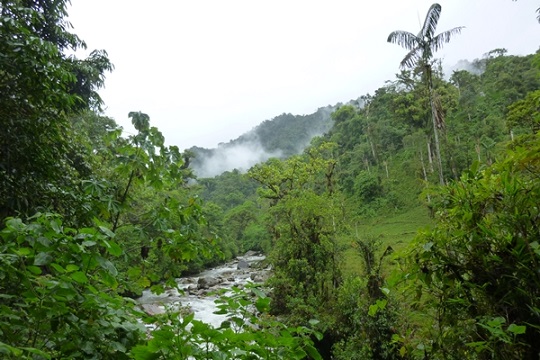 A 234 acre (almost 100 hectare) extension of Andean Foothill Forest has been secured in the Narupa Reserve of north eastern Ecuador, in the Amazonian Lowlands.

This reserve is a haven for birdlife, with more than 300 species recorded, including several species listed as Vulnerable by the IUCN Red List: Cerulean Warbler, Black Tinamou, Military Macaw, Coppery-chested Jacamar and Foothill Elaenia.

The road to deforestation

One of the reasons land protection in this area is so urgent is that a road connecting the city of Baeza in the eastern Andes to the town of Puerto Francisco de Orellana in the Amazonian lowlands has just been paved, making the area more accessible to wildlife tourists but also more open to clearance for agriculture.

“We have been working with our partner Fundación Jocotoco for 18 years now, supporting the creation of reserves and extensions of those reserves to safeguard key areas of forest, which are of particular importance to bird diversity.

“Protecting this property is particularly important as it brings together areas of the reserve, connecting the breeding site for the Orange-breasted Falcon, secured by Jocotoco, with the rest of the reserve.”

Fundación Jocotoco run a successful ecotourism programme which helps to support the protection of their reserves. Going to Narupa Reserve to try and spot the only known nest for the Orange-breasted Falcon in Ecuador is a must for any keen birdwatcher travelling to the country, as is visiting Buenaventura Reserve to look for Howler Monkeys and the Endangered El Oro Parakeet.

WLT is grateful to the trustees of the Robert E Zauhar Living Trust whose donation in memory of Robert Zauhar funded the purchase of 212 acres (86 hectares) of this newly protected area of forest.

WLT funds the long-term protection of reserves like Narupa through the Keepers of the Wild appeal, which sponsors the salaries of local rangers hired to patrol reserves, protecting the wildlife from illegal activities and monitoring animal activity.