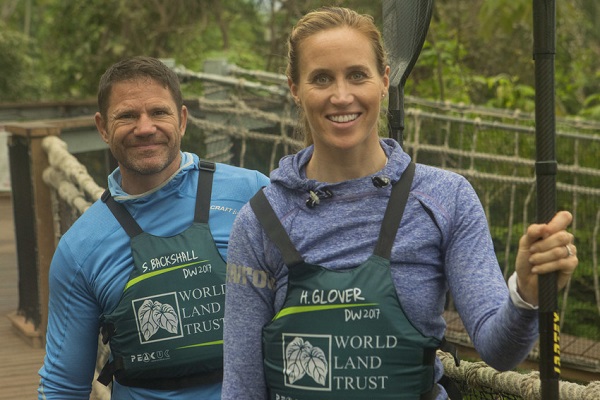 The Celebrity Charity Champion Award recognises a celebrity who has shown genuine and productive support for his or her chosen charity or charities. Separately, Steve and Helen have both been exceptional Charity Champions for World Land Trust (WLT).

However, after their marriage last year they have combined their star power and worked together to raise awareness and funds, and have been nominated for the award together.

In 2015, WLT Patron Steve raised £50,000 in sponsorship when he completed the Devizes to Westminster International Canoe Race (called the ‘Canoeist’s Everest’) which directly funded the purchase and protection of 481 acres of Chocó rainforest in Colombia.

“Steve and I are so pleased to be shortlisted together for this award,” says Helen. “Steve’s passion for the charity and what they do for the natural world inspired me to get involved as well, and last year I campaigned to protect the Olympic Forest Reserve in the lead up to Rio 2016.”

Even in the midst of training for her second Olympic gold medal, Helen’s appeals on social media were critical and the appeal ended up exceeding its £40,000 target.

This year they combined their star power and exceeded all expectations in their ‘Race for Borneo’, kayaking for just under 23 hours, 125 miles from Devizes to Westminster to raise funds for WLT’s Saving Kinabatangan appeal.

Steve told WLT, “The response we had from the public was incredibly inspiring. We heard from children all over the UK who were running their own events, cake sales, kayaking, car washes, donating their pocket money, to help us.”

WLT Founder CEO John Burton added “Their dedication to the cause of land conservation has gone far beyond the awareness raising of most celebrity patrons, actually dedicating weeks of hard-core training to prepare for an incredible sponsorship challenge, kayaking for 24 hours to help us save a portion of rainforest in Borneo. This appeal was phenomenally successful, actually tripling the original target of £100,000 so we could protect more land than we originally thought possible.”

The winner will be announced at the Third Sector Awards Ceremony at the London Marriott Hotel on 21 September 2017.