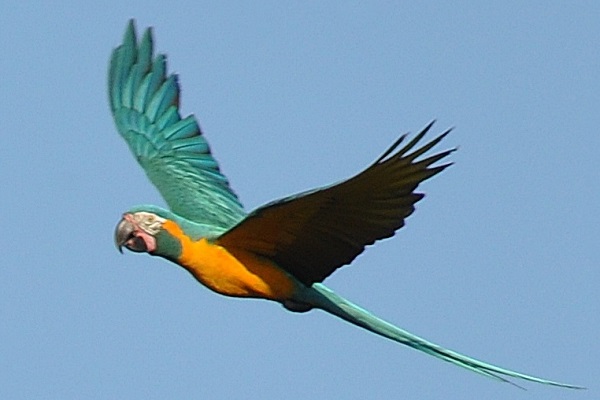 The Barba Azul natural fencing project has now been given the go-ahead, as World Land Trust (WLT) supporters have raised £20,000 for the Blue-throated Macaw Appeal.

This project is a sustainable solution to one of the causes of habitat loss for the Critically Endangered macaw; thousands of trees are being logged each year to create fence-posts for cattle ranches and reserves in the macaw’s Beni Savanna habitat.

WLT’s partner in Bolivia, Asociación Armonía, will use the funds raised to substitute the fences around the Barba Azul Reserve with more than 1,000 Vochysia divergens ‘Aliso’ trees. These will replace the traditional fenceposts which deteriorate very quickly in the savanna conditions of fires, floods and humidity.

Bennett Hennessey, Development Director of Asociación Armonía, thanked WLT donors for their support of this appeal “The support for the Aliso live tree fencing project will allow us to improve habitat for the Critically Endangered Blue-throated Macaw, and allow us to offer an eco-friendly long-term solution to fencing for cattle ranches in the Beni Savanna.”

The Blue-throated Macaw Appeal was supported by the Bird Race Challenge earlier this year, a fundraising event in East Anglia based on the bird races of the 1980s and an online auction of ceramics made by Maureen Minchin inspired by Bolivian wildlife.

WLT would like to thank everyone who supported this appeal, we have had hundreds of donations over the last two months to help conserve this Critically Endangered species.